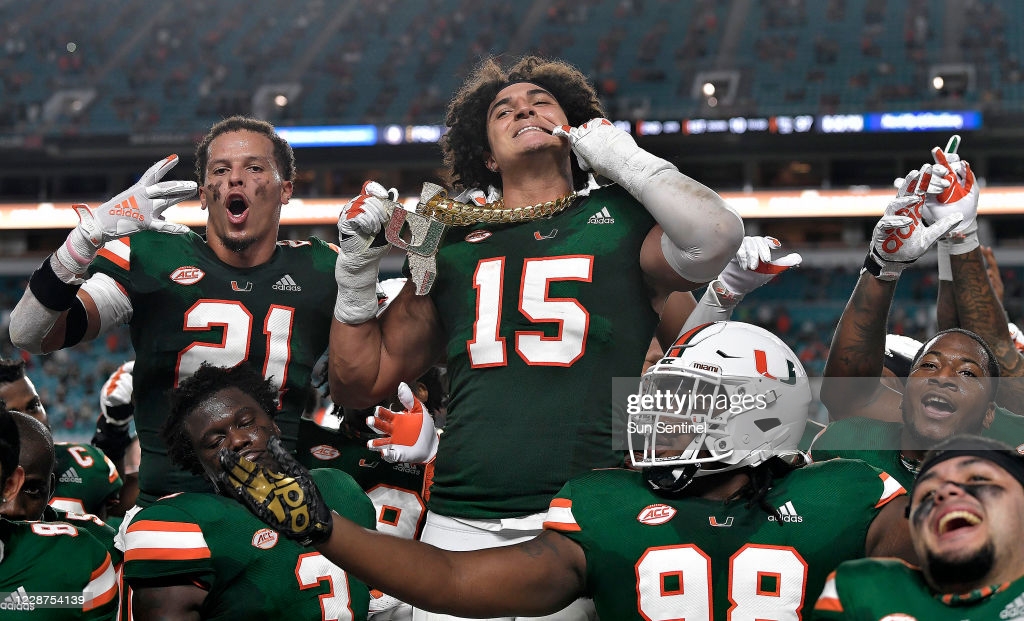 -Has played both in a 2-point stance and with his hand in the dirt in a 4 man front on the left side
-Lined up out wide in a 7 and 9 tech, as well as head up the tackle/TE along the front and inside shade of the tackle by the guard
-Good athleticism in terms of speed and explosiveness for the position
-Has good initial burst of the ball with delay on occasion off the snap, but accelerates well up the field as a rusher
-Can redirect fairly quickly when the ball is pitched or on reverses
-Long arms aid in getting a hold of ball carriers while still engaged with blockers
-Does a pretty good job keeping his shoulders square to the LOS coming off of the edge on option runs
-Has the speed and acceleration to pursue downfield on run plays and play chase of the QB off of the edge
-Has the arm length and strength to stack and shed in the run game, getting off blocks to pursue the football
-Does a good job at hitting down blockers’ hands with a swipe or cross chop on inside moves to get penetration quickly against the run
-A true mismatch against TEs with the size and strength to overpower them against the pass and run
-Can dip his shoulder under longer tackles and run the arc on the edge
-Likes to utilize the swim move with a slap of the outside hand and then over the inside hand to clear the blocker
-Can hit the dip rip move where he swipes at the blockers hands with outside hand then dips down and rips through with the inside hand to get the corner
-Will loop back inside and run the stunt game with the tackle on his rush, trying to get freed up coming inside or get a matchup with the guard
-Has been asked to drop into coverage in the flats in the past as a standup rusher

-Lacks overall lateral speed and needs to drop hips more to move side to side
-Needs to finish better when he gets to the football, driving his feet on contact rather than looking to throw a ball carrier and arm tackle
-Pad level can get too high at times, allowing him to get pushed off of his spot
-A lot of his production with him working inside as a pass rusher rather than consistently getting the edge
-Can crash too hard inside at times, leading to him giving up outside contain on outside runs
-Can struggle to work off-script when his initial pass rush fails, and he gets locked onto by tackles
-Will expose his torso on swim moves and stunts inside, leaving him susceptible to getting blocked
-Will occasionally come too hard off the edge, leading to the play running right underneath him
-Has a history of injuries and had to give up football for a time due to concussions
-Only 1 true full season of production in college

-Redshirt Junior prospect from Redlands, CA
-Consensus 5-star prospect as a high school recruit
-Played in 6 games as a true freshman for UCLA, totaling 21 total tackles, 7 TFLs, and 3.5 sacks in limited action
-Saw action in 4 games as a sophomore, tallying 20 total tackles, 1 TFL, and 1 sack
-Missed most of his 2 seasons with the Bruins with a plethora of injuries, including severe wrist damage as a result of a moped accident, ankle sprains, and three separate concussions, the last of which forced him to medically retire from football
-Later enrolled at Miami for music production, and then was cleared to return to football for the Hurricanes
-Returned to action after a redshirt in 2019, recording 45 tackles, 15.5 for loss, and 8 sacks along with an INT and 3 pass breakups in 10 games started
-Opted out of the bowl game to prepare for the NFL draft

Jaelan Philips has endured quite the journey during his college career. He was heralded as a top 5 recruit in his class, and ended up staying home at UCLA, Alas, numerous ankle, wrist and concussion injuries ravaged his 1st two seasons, causing him to retire from football. He enrolled at Miami for his education, and after receiving clearance to play again, shined in his lone season for the Hurricanes. Philips helped fill the void left by Gregory Rousseau opting out of the season, lining up from a wide-9 to nearly head up on the guard on a four-man front. He played both with his hands in the dirt and standup as an edge rusher and showed off his athleticism both on the edge and inside. He has the speed and acceleration to play great pursuit of the QB as well as the ball carrier downfield. Here is an example of Philips getting off his block, turning the corner, and then chasing down the QB scrambling from the pocket.

He gets upfield quickly and can get inside a blockers frame quickly to stack them and shed them away to play the run as well as hit their arms down on inside or outside pass rush moves. He shows his ability to stack and shed at the line of scrimmage on this play against Louisville, getting off his block and getting the stop.

Philips isn’t a ridiculous bender by any means, but he does have the athletic ability and movement skills to turn the corner and get underneath the blocker’s reach. Here he hits the dip/rip combo and get under the tackle, rounding the loop right into the passer.

He is well utilized on stunts and working inside over the guard or crossing the tackle’s face on an inside rush. Here his uses an inside swim move on the right tackle from Virginia Tech and blows past the blocker for the easy sack.

While Philips is undoubtedly talented, he has a lot he needs to work on. He plays too upright at times and can get in the habit of shooting too far upfield or too fast inside, giving up running lanes to the outside where he would have contain. For example, He should have turned the corner better on this rep vs Clemson, but rather he got his momentum going too fast upfield, running himself out of the play.

He also struggles to work with a counter, tending to have his rush die out if his 1st move doesn’t work. His hand usage will leave his body exposed to big blocks on occasion as well, leading to him being beaten on that play. This can be seen in this example vs Clemson where he tries to go high with his arms, leaving his torso exposed for a clear strike from the tackle, keeping out of making the play.

Philips also has the big injury concerns, especially with the concussion history, having forced him to retire from football once already. Overall, Phillips is a tough evaluation given his talent and upside as an athletic pass rusher, but also the risk he carries. Should his medicals check out, there is little to doubt he can come in as a base defensive end or standup edge rusher and contribute right away. However, he does need to play with better leverage, learn to win consistently outside, and also has the durability issues.

Teams will have to be confident that his injury history is past him and that another concussion wouldn’t force him away from the game altogether. He reminds me a lot of Dante Fowler; an athletic, high-pedigree pass rusher that can struggle with consistency and has had his own injury concerns during his time in the league. In the Steelers’ case, he figuratively would be an early option to replace Bud Dupree given his knowledge as a standup edge rusher that has shown the ability to drop into zone coverages. However, I would caution buyer beware on Philips, especially early in the draft.