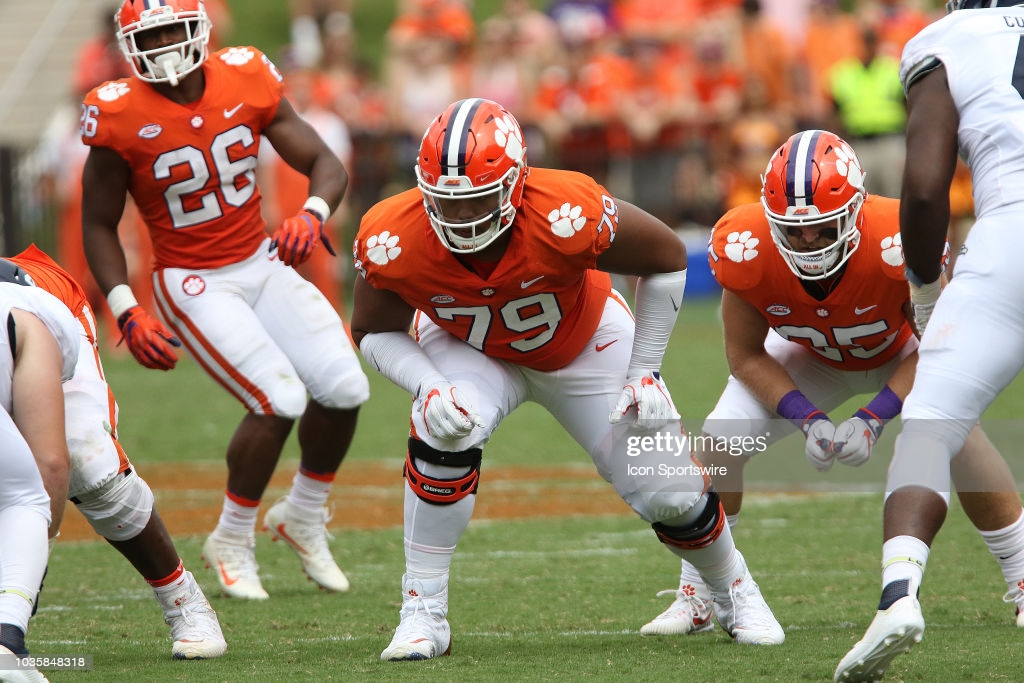 -Athletic specimen along the offensive line
-Great length overall to keep defenders at bay
-Able to stymie initial pass rush and reset his feet quickly
-Good initial depth in pass sets, good feet overall, especially late in 2020
-Never have to question his effort rep to rep
-Has a mean streak in there; can smell the syrup on the pancakes ahead of reps, loves to finish
-Surprisingly polished hand usage overall in pass protection; good overall hand fighter with powerful trap/snatch
-Violent hands with shocking power that stun defenders
-Able to sink into his hips quickly and engulf bull rushers
-Rolls hips into contact easily in the run game creating movement with good leg drive

-Feet can get heavy against speed rushers off the edge
-Once his feet go in pass protection, technique falls apart, becomes a waist bender and lunger
-Struggled to slow down counters inside; processes counters just a tick late
-Appeared to have communication issues at times in 2019 and 2020, leading to free rushers
-Angles and overall technique climbing to second level needs work
-Penalties are an issue, especially in marquee matchups; tends to get grabby

As many of you are aware of by now, the offensive tackle class is a deep one in the 2021 NFL Draft class. Somewhere in that depth is former 5-Star recruit and standout Clemson left tackle Jackson Carman.

A two-year starter at Clemson and veteran of 40 career games in three seasons, Carman has put some good tape out there as a member of the Tigers. With impressive size, length, power and overall athleticism, Carman looks like a strong building block along the offensive line for years to come.

In pass protection, Carman has good overall hand usage with impressive power. He possesses a strong trap/snatch, which he showcases here against Miami (Fl.) pass rusher Cameron Williams, burying him in the dirt.

Though many think Carman has heavy feet overall, I think he showcases light feet in vertical sets, and he really does a great job resetting his feet quickly to stymie rushes.

In 2019 against future NFL pass rusher Alton Robinson, Carman does a great job with his initial punch while getting adequate depth. Robinson does get into his chest, but Carman shows his ability to recalibrate his feet and sink into his hips to stop the rush.

While I like Carman quite a bit in pass protection, he does struggle with speed off the edge. When he is dealing with speed, his feet tend to get clunky and throw off his technique.

He appears to be so focused on his vertical set against speed that he’s hesitant to use his length to his advantage and throw hands.

Quincy Roche does a great job getting into Carman’s chest, knocking the big tackle backwards in Trevor Lawrence’s lap, forcing the star quarterback to scramble.

Where I think Carman is at his best is as an athletic run blocker. He has a real mean streak to his game, too, which is lovely to see.

Against Virginia Tech, Carman simply took over in the run game, plowing lanes open for Travis Etienne. He does a great job climbing to the second level here against Rayshard Ashby, using his great length to reach the linebacker before then engaging his legs to drive the linebacker backward.

His hips and feet are pretty impressive in the run game. I loved this rep by him against Virginia Tech, opening up lane inside for the score.

He does a great job getting initial ground in his climb to the second level, but then flips his hips to turn and cut off the defender, putting himself in perfect position between the running back and the defender.

It’s pretty darn startling how athletic Carman is, especially in space. He moves well for the massive human he is. While he doesn’t have the overall foot speed that a guy like Virginia Tech tackle Christian Darrisaw might have, but Carman does a great job reaching his target and getting hands on the defender to clear a path for Etienne.

Overall, I think Carman has some clear issues against speed overall on the edge, but the length and power — along with his youth — has me very intrigued in this tackle class.

Carman should be able to come into the NFL and start right away in a gap/power scheme. He has all the physical tools you could possibly want, and has quite the experience and tape.

In a deep tackle class, Carman could slip down boards due to the general depth. He’s one to keep an eye on though.