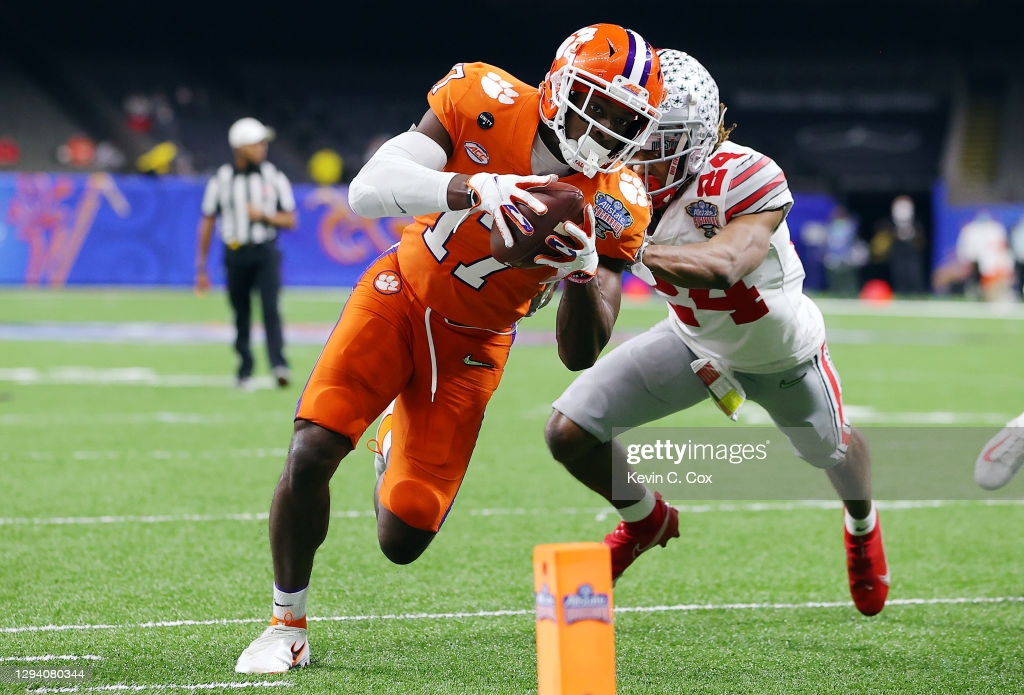 -Effortless route runner that explodes in and out of cuts
-Plays through contact well and won’t be bumped off of his routes; wins consistently in contested-catch situations
-Strong, reliable hands to snatch the ball out of the air
-Eats up off-man coverage consistently
-Dynamic YAC guy; strong runner with the football and has impressive contact balance and burst
-Willing blocker that likes to throw his body around; true team guy

-Limited long speed guy that won’t scare defenses vertically week to week
-Must continue to develop marrying hand usage with footwork on releases
-One-year wonder; buried on depth chart for four years before redshirt senior breakout
-Will turn 24 years old during his rookie season
-Must expand his route tree at the next level and become more nuanced within his routes

-Played in 54 career games for the Clemson Tigers, starting 12 total games
-Entered 2020 season with 40 career receptions for 329 yards and three touchdowns
-Hauled in 53 passes for 882 yards and tied for team-lead in TD receptions with seven
-Named to Third Team All-ACC in 2020
-Competed in the 2021 Reese’s Senior Bowl

Clemson redshirt senior wide receiver Cornell Powell was quite the story in 2020.

After four years buried on the depth chart and just 40 career catches, Powell exploded onto the scene in 2020, putting up 53 receptions for 882 yards and seven scores, pairing with Amari Rodgers to provide future No. 1 pick Trevor Lawrence with two YAC monsters.

In a deep receivers class, Powell feels like a guy who could be quite the bargain find on Day 3.

I don’t consider Powell a burner or a consistent deep threat by any means, but in 2020 he was able to stack defenders and get vertical, making splash plays for the Tigers.

I like the way Powell was able to get a subtle pushoff here early in the route against the Hokies’ corner, giving Powell just enough separation to make a play on the deep shot.

Same thing here against Pittsburgh in 2020. He’s able to shield himself away from the Panthers’ defender and makes a terrific one-handed catch in the process, pinning the football to his shoulder for the explosive play.

This rep against Notre Dame in 2020 really impressed me though from a vertical perspective.

Powell chews up the off coverage quickly and has a great head and shoulder fake to the outside, causing the Notre Dame corner to bite, allowing Powell to cut inside on the post for the score.

He’s not a big receiver overall, but Powell is quite strong for the position, has a large catch radius and excels in contested-catch situations.

Here against Georgia Tech early in the 2020 season, Powell does a great job on the back-shoulder throw to go up through contact, highpoint the football and rip it out of the air for the catch.

Where I think Powell could really excel in the NFL is after the catch.

He has great contact balance overall, uses his size and strength to his advantage and has some twitch to his game.

He knows how to create angles to his advantage and routinely caused defensive backs to miss often in space.

This run against Notre Dame last season would have landed him on the Angry Runs portion of Good Morning Football on the NFL Network in Kyle Brandt’s segment.

Look at the contact balance and the overall power on this play. If I’m an offensive coordinator at the next level, I’m trying to get Powell touches on tunnel and bubble screens to let him punish defensive backs.

Overall, Powell isn’t going to turn into a No. 1 — and maybe not a No. 2 — at the next level, but he’s a good developmental wide receiver to take on Day 3. He’ll provide depth, do whatever the coaches ask, and put the team first. You need a glue guy, and that’s what Powell can be.

He’ll give his all on the field every rep too, whether it’s one snap or 70 snaps.