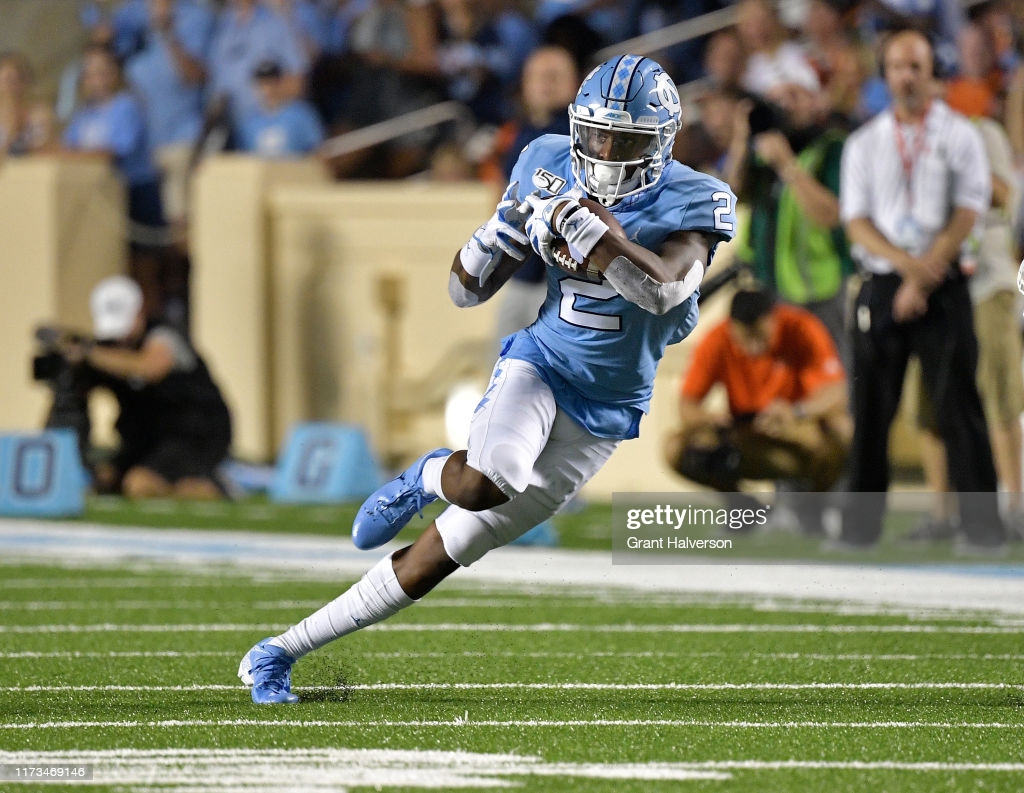 -Possesses quality speed and explosiveness for the position
-Served as the Tar Heels deep threat, having the long speed to challenge corners vertically and get behind a defense
-Gets off the line quickly on the snap and attacks the defender’s cushion aggressively, getting in position to stack the corner on the deep route
-Comfortable working the short and intermediate areas of the field with quick outs, comebacks, and slat concepts
-Can have a quick stab at the top of his route to break back to the ball or cut inside with his route
-Flips his hips back to the ball quickly on curl and comeback routes, creating separation from tight coverage
-Gets plenty of room to work in off man coverage with corners allowing him anything short with the fear of getting beat deep
-Displays good contact balance as a runner after the catch staying upright on body shots to keep running
-Able to win a fair share of contested catch situations with good focus on the football and sure hands at the catch point
-Willing blocker that will square up with defensive backs on the outside and lock on to spring the runner

-Primarily played on the perimeter for the Tar Heels offense with little to no exposure inside
-Isn’t going to win a ton of jump ball situations in the red zone
-Normally is sure handed, but will have an occasional drop when he hears footsteps or is hit when the ball arrives
-Will round his inside breaking routes on occasion, needing to have more suddenness out of his breaks
-Doesn’t possess prototypical size and lacks ideal bulk to deal with press man corners at the next level

-Made an impact as a receiver, rusher, and as a defensive back as a prep athlete
-Younger brother, Khafre, is also a wide receiver at North Carolina
-Saw action in 10 games, starting six as a true freshman, catching 17 passes for 173 yards and a TD
-Broke out in his sophomore season, starting all 13 games and hauled in 51 receptions for 1034 yards and 12 scores
-Played in only 11 games after sitting out the Orange Bowl as a junior, recording 55 catches for 1099 yards and 8 scores
-Averaged over 20 yards per catch his final 2 seasons, nearly leading the NCAA in that category
-Named third team All-ACC selection as a sophomore
-Biletnikoff Award Semifinalist, AP All-America Team (Third Team), and All-ACC First Team selection as a junior

North Carolina enjoyed a plethora of dynamic skill position players this season in Chapel Hill. Although the running back tandem has garnered the headlines and most of the draft buzz to this point, Dyami Brown quietly rounded out what was a lethal offense. Brown is a big play threat waiting to happen, averaging the most yards per catch two years in a row in the ACC. When you are posting over 20 yards per reception and top the 1,000-yard mark in your first two seasons as a full-time starter, you tend to be doing something right.

Let’s go through the positive traits that make Brown viable option in this year’s deep WR draft class. First is his ability to fill the role as a seam stretcher downfield. He has legit speed and burst from the snap to attack corners in coverage and get on top of them in a hurry. He stretches defenses vertically and comes down with good amount of deep shots for chuck plays or long TDs. In this clip, you will see him get an outside release to the boundary, hit the stutter and go, and pull away from the defender to haul in the deep ball for the score.

Notice how this TD came against AJ Terrell, who was drafted 16th overall this past spring to the Atlanta Falcons. Here is another example winning vertical vs Florida St. in 2020. While he may not have ideal size at sub-190lb for more physical press man corners in the league, he shows good hand usage getting off the jam, getting an inside release, and separating from the defender for the easy over-the-shoulder TD catch.

Along with his speed and acceleration comes his ability to track the deep ball. Here is a great example against Miami this season of him running under the deep ball in-stride and having it land perfectly in the bucket.

Defenses will often take their chances and play off-man coverage on him, allowing him easy completions to avoid getting beat deep.

Despite being a deemed a big play deep threat, Brown works all over the field from the perimeter, running the short and intermediate route concepts well. Here he is in the same game versus Virginia running the quick out route. He stops his feet, drops his hips, and breaks to the outside for the catch and runs up the sideline for the score.

Brown’s run-after-catch ability is another underrated trait of his game. Despite being on the smaller side, he is a physical runner after the catch, having the strength and contact balance to pick up extra yardage against tacklers who fail to wrap him up.

While Dyami Brown has shown the ability to work all quadrants of the field, his consistency in his route running can use some work. He can stand to do a better job stemming his vertical routes as well as be quick out of his breaks when working the middle of the field. This clip shows an example of him making the catch but rounding his route rather than making a crisp cut inside.

Brown has also shown the ability to win catches in coverage, but this shouldn’t be considered as one of his strong suits. His lack of size and mass comes up when his playing the jump ball, often resulting in pass breakups. Here is an example where he gets open, goes up for the ball, but hears footsteps coming and fails to bring in the reception when contacted by the defender having the ball hit the turf.

While some may peg Brown as mainly a deep threat for a vertical offense, his tape shows a well-rounded player, having the speed and separation ability to bring in the deep ball, but also showing a willingness to pick up the tough yardage over the middle, working all areas of the field. Overall, Brown has a lot of positive traits pointing to be a productive receiver at the next level. He may lack feature size, but his talent as a vertical threat and the flashes he shows he shows as a route runner should have him see the field early on in his career as a Z-type receiver to compliment more of a possession style receiver. He honestly reminds me a lot of Will Fuller, having a similar body frame along with the ability to win vertical, work the intermediate, but isn’t a jump ball specialist and can have the occasional drop.

If the Steelers want to find a James Washington replacement since his contract is up after the 2021 season and try utilizing Diontae Johnson or Chase Claypool in the slot more for matchup purposes, Brown would be a great option to have on the outside opening up options underneath with the skillset he provides. Should he learn to operate more in the slot and improve his consistency in separating, Brown can develop into quite the weapon in a pass-heavy offense.