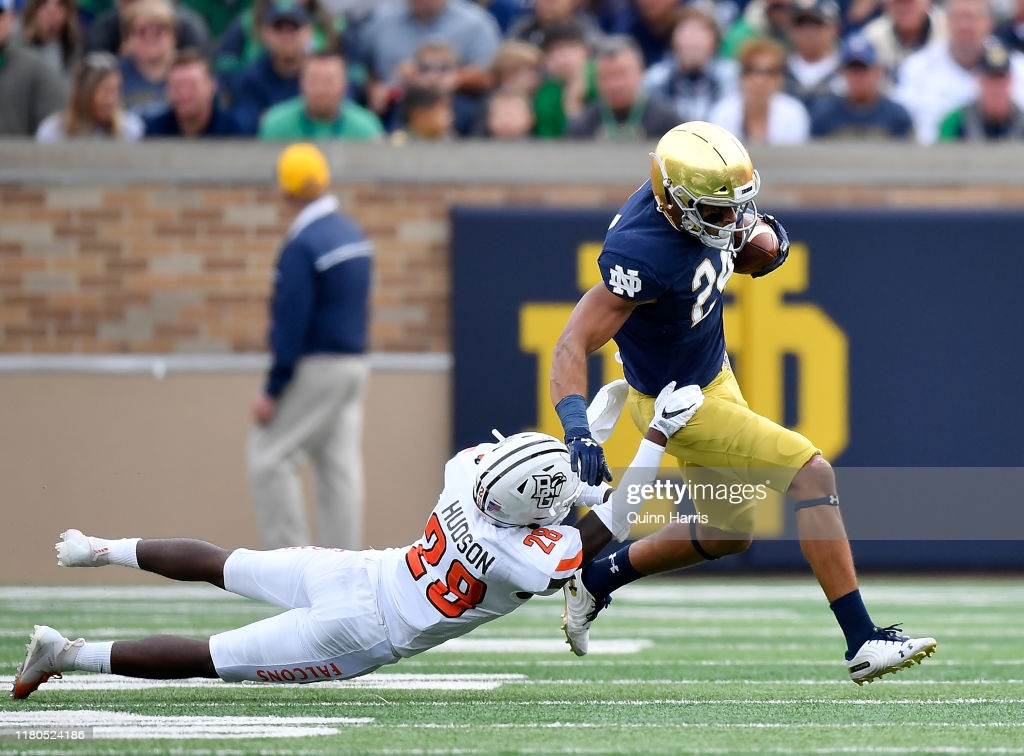 – Plus size and length, good bulk and fills out frame well
– Tenacious, physical blocker who takes a lot of pride in the run game
– Drives legs on contact, seeks to finish his blocks and plays with a mean streak
– Good strength to hold POA, generates movement on down blocks and a quality lead blocker when used as a FB
– Experience as an in-line blocker and working out of three point stance
– Good football IQ, work on scramble drills to make himself open/available to QB
– Shows burst and snap out of his stance, decent athlete when asked to move in a line
– Plus body control and adjustment to the football
– Soft hands and catches away from his body
– Young with room to grow

– Very limited use as a receiver, blocker-focused role, not even top passing TE on own team
– Not a terrible athlete but struggles to naturally create separation, beat zone coverage most of the time, build-up speed runner
– Won’t offer much after the catch
– Falls off too often immediately after contact, tends to go for knockout blow than playing with technique and just winning block
– Not used in every down role, especially in 2019 sophomore season

It’s hard to find tight ends who can block coming out of the draft. Tommy Tremble is an exception. He’s arguably one of the better blockers in this class and that was the role he primarily occupied at Notre Dame, especially in 2019 when he was playing behind Cole Kmet.

Blocking is what teams will draft Tremble for. He’s aggressive, tenacious, and takes a lot of pride in being the guy to clear a path for his running back. Check out him clearing the way on the goal line against South Florida in 2019.

And a clip from this season. He has good size, bulk, and looks to finish every block with great leg drive through the whistle.

Though he wasn’t often targeted, Tremble showed plus hands and consistently caught away from his body. He’s not likely to do much after the catch unless he’s blowing past zone coverage but he’s a reliable underneath option.

On the negatives, he can fall off blocks. Might get a little too aggressive and want to go for the knockout punch on contact. Which can cause him to be unable to sustain his blocks and finish. Not a major issue and fixable but it’s worth noting.

Tremble obviously didn’t have much college production as a receiver and I don’t see that changing a whole lot in the pros. He likely doesn’t have the ceiling of a #1 tight end especially in this era of guys like Travis Kelce and Darren Waller. Tremble clearly isn’t that kind of game-changer.

It’s cliché and dangerous to use this phrase when it comes to the draft but Tremble feels like a high-floor, low-ceiling type of player. Impactful blocker with good hands but not someone who will catch 50+ passes a season in the NFL. Basically the opposite of Eric Ebron. For his NFL comp, I’ll go with a Notre Dame alum – the Miami Dolphins’ Durham Smythe. 4th round pick in 2018 whose carved out a niche role in the league.

It wouldn’t be a bad idea for the Steelers to draft Tremble. But they’d still have to search for their long-term starting tight end in a future draft.

Games Watched: vs Georgia (2019), at Pittsburgh, vs Clemson,  vs Alabama (Limited/Injury)