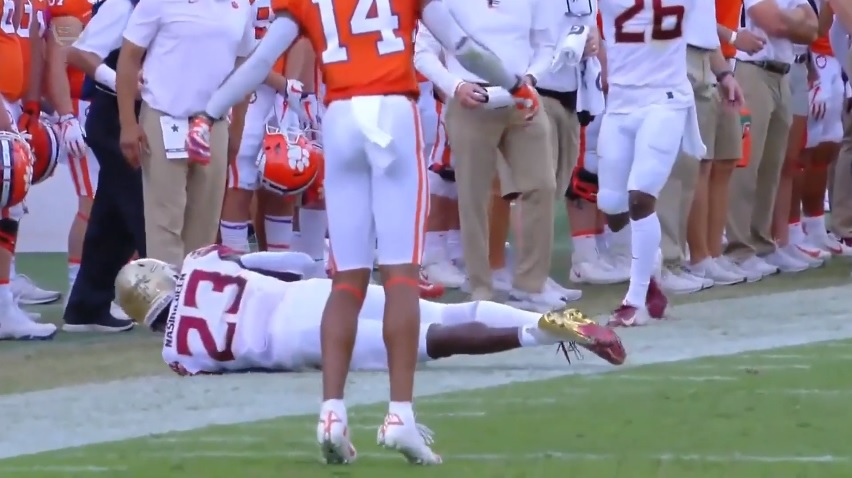 – Impressive size and length for the position
– Versatile, smart chess piece who lined up all over the field
– Plays run aggressively, downhill player, physical nature who fits run well
– Takes good angles to the ball in run and pass, good understanding of leverage and where help is at
– Size/length makes him an asset in man coverage, able to match up on tight ends over slot
– Closes on ball quickly, length helps him make plays on the football
– Shows plus hands and ability to finish the play,
– Plenty of special teams value
– Good production, took the ball away a ton with interceptions and forced fumbles

– Average athlete who may lack true NFL fit, doesn’t have defined role/position
– Shows some stiffness when asked to break down and change direction
– Not a thumper in the run game, wrap-up tackler but can’t always quickly take the runner down
– Tends to aim low as a tackler and drop eyes, causing him to miss
– Some injury concerns, suffered major knee injury in 2019 though returned for end of 2020 season, heighten athleticism concerns

Nasirildeen doesn’t have the same exact skillset as pending free agents Mike Hilton and Cam Sutton but if the Steelers lose one of those guys, and definitely if they lose both, Nasirildeen is someone who could be on their radar. He was a chess piece in Florida State’s defense. He played slot, box, deep half, single high, a linebacker-ish role right at the line of scrimmage. There wasn’t a lot he failed to do in this defense which signals a good football IQ.

You see some of that on tape, too. Great example here, sniffing out this reverse, staying at home, reading the play, and taking a great angle to the ball and finishing with the tackle.

He’s not on a Minkah Fitzpatrick level but he made a ton of splash plays in college. Combined seven interceptions and forced fumbles in just 18 career starts is nothing to sneeze at. He has impressive hands, no doubt because of his high school days when he played solely as a receiver before moving to defense for his junior season. Photo you see in the headline is his toe-tapping pick of Trevor Lawrence against Clemson. Not a lot of DBs are going to show this level of body control, hands, and finish. I’m not 100% sure if this was actually the correct call and that Nasirildeen reestablished himself (the rules are a little hazy) but the point here is his great hands and body control. Played it like Antonio Brown.

On the downside, I do question his overall athleticism and ability to play in space. And I had those concerns before tearing his ACL. Nasirildeen played relatively well in return from injury but his straight line speed is average and his change of direction shows hip stiffness. He plays with good leverage here to force the cutback, I understand that, but can’t flip his hips to make the tackle and ends up missing.

He also wasn’t as consistent as a tackler as I’d like him to be. More wrap-up/drag down guy than someone who can land a powerful blow. He had trouble bringing down Travis Etienne, obviously a talented back, but the caliber of player Nasirildeen will see weekly in the NFL.

To succeed in the NFL, you need to be in one of two camps. Versatile or be really good at one job. Nasirildeen is in the former camp. He’s not great at any one thing but he’s capable of wearing a lot of hats. Of current Steelers, his size and skillset is closest to Antoine Brooks. My NFL comp for him was a little hard to come up with but I landed on Clemson safety Jayron Kearse.