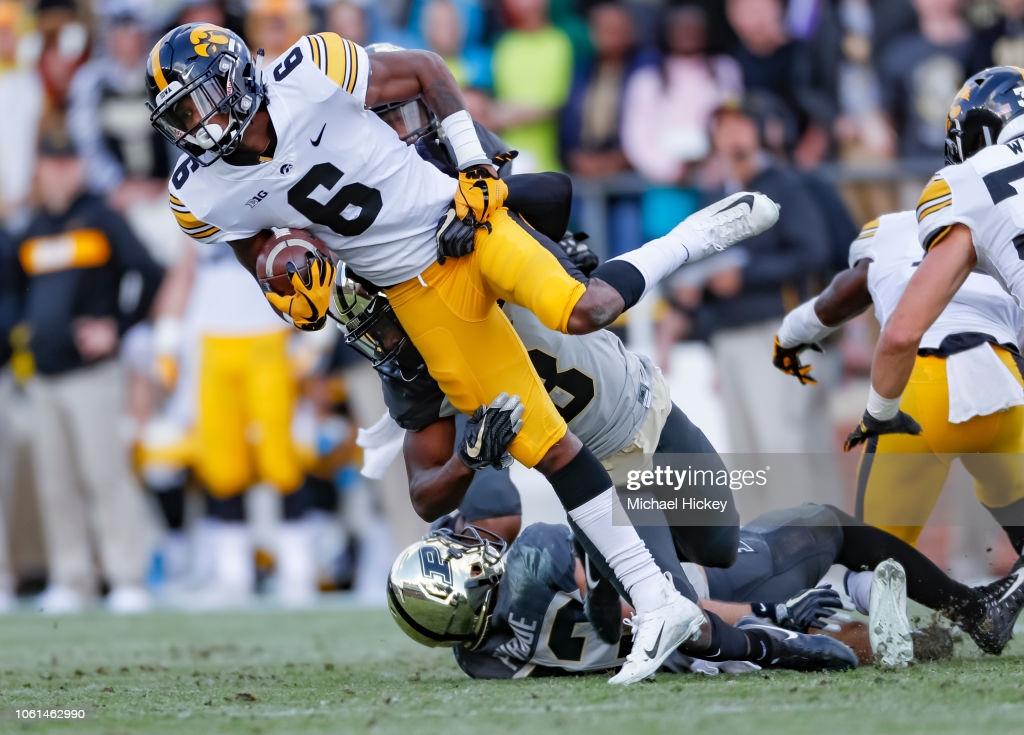 – Explosive athlete with excellent straight line speed
– Legit vertical threat that can stretch field from slot and outside
– Smooth in and out of breaks
– Accelerates into breaks, helping create separation
– Can create big plays on short routes with RAC ability
– Understanding of where and when to sit in holes against zone defense
– Attacks defensive back’s leverage with footwork and breaks cushion with speed
– Good starting experience against quality competition
– Explosive returner in special teams, has scored multiple times in that department

– Size, limited length will likely limit him to slot receiver role
– Can make tough catches but drops routine routes over course of the game
– Relatively limited route tree due to vertical prowess at Iowa
– Struggles with releasing against press man coverage as outside receiver
– Off field arrest during season will likely hurt draft stock (drunken-driving arrest)
– Inconsistency with route stems and stacking his defenders

Ihmir Smith-Marsette is one of the more explosive players in the 2021 NFL Draft process. He possesses potential 4.3 speed, very athletic and creative with the ball in his hand. Smith-Marsette averaged just under 15 yards a catch, and scored two 90 yard kickoff return touchdowns in 2019. If you’re looking for a late round vertical threat, Smith-Marsette would be a solid option.

Right off the bat, Ihmir Smith-Marsette shows his ability to simply run past the defense on this vertical route and scores an easy touchdown. He makes it look effortless.

Again, this time against Rutgers in 2019, Smith-Marsette’s speed and ability to mirror routes leave defensive backs on an island, and he takes full advantage. He gives a subtle head fake and bursts upfield, catches a 50 yard touchdown. He creates explosive plays.

Smith-Marsettte showed some nuance to his route running in 2020 against Minnesota. He does a nice job opening up the defensive back’s hips at the snap, squares up and breaks the cushion, uses his inside hand as a shield to create extra separation and makes the catch on the out route. That type of route running will be valuable in the slot, creating separation from slot defensive backs and safeties.

The slot fade has become a staple to offenses in 2020 and Smith-Marsette runs this one below to perfection. Fakes the defensive back inside, creates that extra space to let the quarterback drop the ball in and stacks his man. Really solid rep from the New Jersey native.

Drops were an issue early in Smith-Marsette’s career but for the most part he has cleaned up that part of the game. However, there are times where on routine plays or slightly off target passes where he will lose concentration. Here against Rutgers, he runs the perfect comeback route, stems the defensive back and is open but can’t complete the catch.

As mentioned above, Smith-Marsette scored four rushing touchdowns in his career and shows that he is a viable option to be an extension of the running game. Against Nebraska, he takes the end around and scores, showing off his speed and athleticism in the open field.

Final play from Smith-Marsette, he does a nice job selling the post on this corner route. He breaks the leverage of the defensive back, leans his body towards the post and makes a catch in stride and picks up a big gain. Explosive playmaker all over the field.

There is no denying that Ihmir Smith-Marsette is a weapon that could be valuable in the Steelers offense. Even if he doesn’t play a major role in the offense, he brings a ton of upside as a returner and can be used in many facets on the football field. While he does have a DUI arrest from this past November that could affect his draft stock, there hasn’t been any other red flags or character issues associated with him. He would likely be a Day 3 player at this point, more of a gadget, big play threat. He was also severely underutilized in Iowa’s old school offense.

His versatility as an inside and outside receiver should make him an intriguing projection in the NFL.