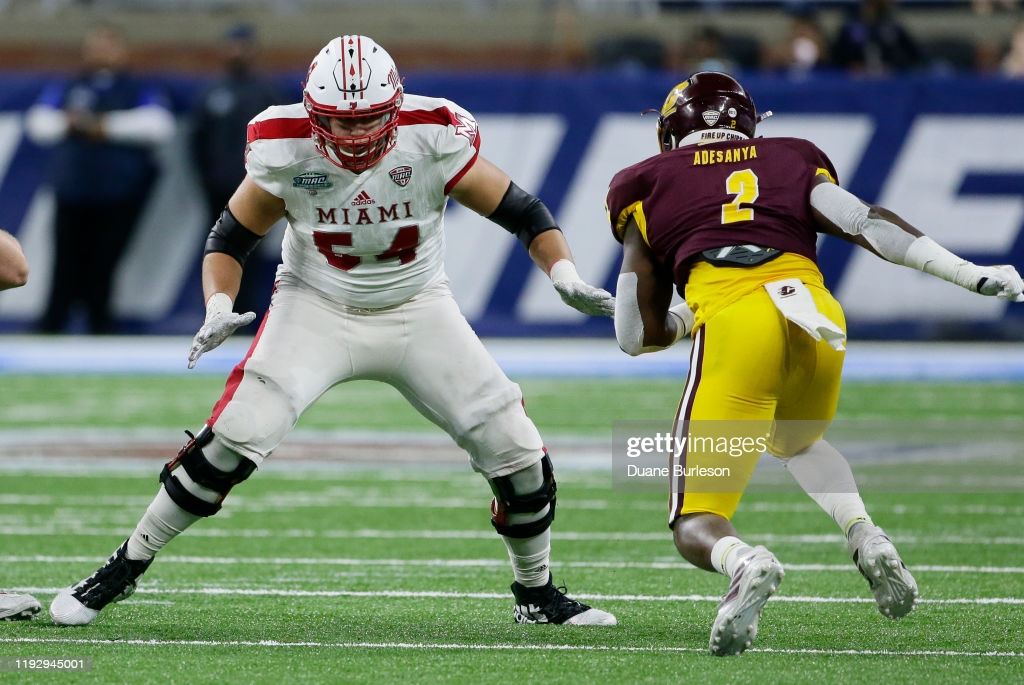 – Tremendous size and length, one of the biggest tackles in this class
– Good athlete for his frame, shows burst out of stance and has quick, light feet
– Powerful run blocker, generates a lot of movement on down/combo blocks at the first level
– Terrific leg drive, strains through his blocks, tenacious mentality and plays through the whistle
– Strong punch, good hand use and placement overall, uses length to create space in pass pro, hard to get around
– Effective short/jump setter
– Sets hips well in run game, able to cutoff block from the backside
– Experience at left and right tackle
– Game is growing and improving, not a finished product
– Good starting experience

– Size can work against him, puts his head into too many blocks, plays with forward lean and tendency to bend and waist
– Waist bend causes him to lose too many blocks in pass and run game
– Vulnerable to speed rushes and inside counters, inconsistent in pass pro
– On ground too much and needs to show better balance
– Angles when climbing to the second level need improvement
– Can get grabby, leading to holding calls
– Rough around the edges, not Day One ready, best tape came in 2020 when he only played three games
– Seemed to constantly battle minor injuries, couldn’t always finish games, had more serious injuries early in his college career

– 30 career starts for the Redhawks
– 16 starts at LT, 14 at RT
– Named First-Team All-MAC in 2019 and 2020
– Started all three of Miami’s games in 2020 (several games were cancelled)
– Missed back half of 2017 season due to foot injury
– Redshirted in 2016 after tearing his labrum
– Two-star recruit out of high school, weighed just 250 pounds
– Team captain in HS
– Grew up in Minnesota, played hockey in high school until sophomore year before turning focus to football
– Parents both played sports at Minnesota, mother played volleyball, father played baseball

Doyle is one of the more interesting names of the draft and especially for a Steelers’ team who might wait longer than you think to take a tackle in the draft. Doyle is a sleeper, a fast riser whose 2020 tape was impressive after struggling more in 2018 and 2019.

Overall, Doyle has an interesting combination of size and athleticism. Few are as big as him at 6’8, 326 and while I don’t know exactly how long his arms are, he possesses fantastic length. He’s also an impressive athlete especially relative to his size whose quick out of his stance and is functional in space.

What stands out most is his power as a run blocker. Doyle is a tenacious run blocker who runs his feet and looks to finish every play. He creates great movement on his down blocks and capable of driving defenders into the ground. Left tackle in these clips. In the third versus Buffalo, you see an issue of him struggling to climb to the 2nd level linebacker. But the strength on the DT, sending him flying, is impressive.

In pass protection, Doyle has all the physical tools. Strong punch, proper hand placement, and good feet. Results in some really impressive reps. LT in the following three plays.

His right/left tackle versatility will be a plus in the NFL. He began his career at right tackle before flipping over to left tackle in 2019. His steady improvement is also exciting. While he’s still a raw player in many ways, his best tape was his 2020 film and he’s improved every single season. Turn on the Marshall game in 2018 and you’re not sure if you even see a draftable player. Watch a game from this past season and you see a guy with Day Two talent.

But Doyle is far from perfect. He’s vulnerable to losing against any type of rush. Speed, inside counters, and even bull if his punch is ineffective or his hands are knocked down. Athletic edge rushers will give him fits and Doyle compounds that problem by being a waist-bender, not uncommon for those 6’8 guys, who can give up the edge. RT in the two clips against Marshall, LT in the third versus Buffalo.

Overall, he needs to show more balance, coordination, and stay on his feet more often. He also needs to cut down on holding calls. He gets particularly grabby on down blocks when he can’t reach his spot in time. He was also on the ground too often, like in this clip. Left tackle here.

Doyle is an interesting prospect just because there aren’t too many 6’8, 320+ pound tackles who can move out there. And most of those guys are first round picks. Doyle won’t be because there’s plenty of technique in his game to clean up. But get him with a top tier offensive line coach and organization known for developing those guys, hopefully Pittsburgh is still that place, and there’s plenty of clay to mold.

My comp for him is former Cowboys’ tackle Doug Free, a fellow mid-round MAC linemen who started 114 games in the league, though he was never the sport’s best tackle.