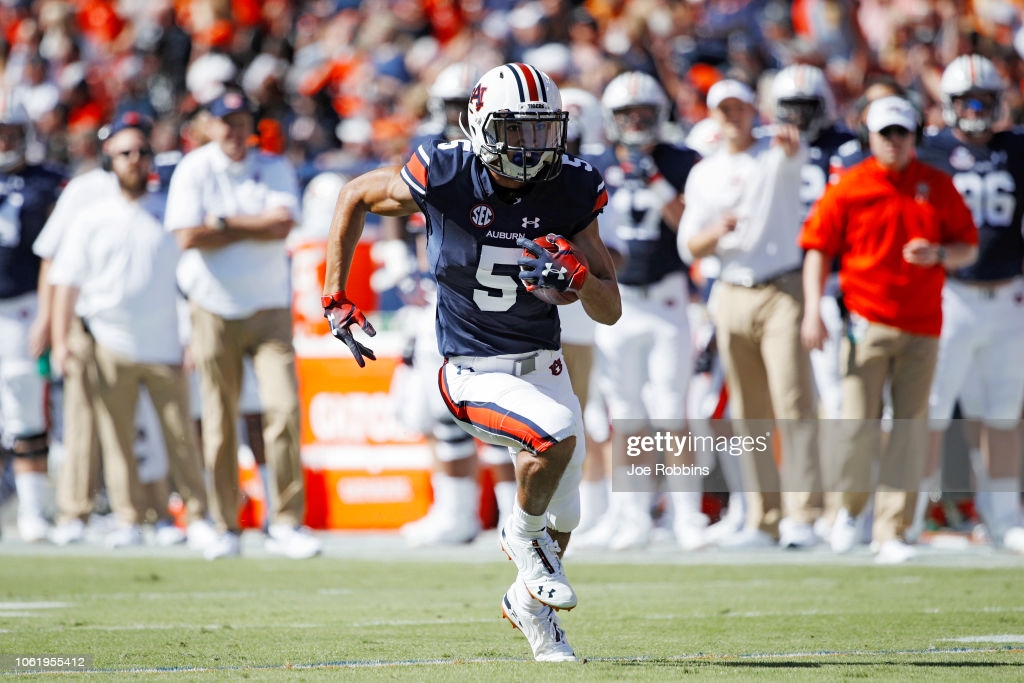 – Lean/slight frame, looks shorter than listed
– Straight-line player, track guy with great speed but struggles more when asked to break down and change directions in small spaces
– Didn’t run a diverse route tree, offense manufactured getting him the ball in space, ran mostly go routes as a receiver along with screen/three-step route tree
– Shows some ball security issues after the catch, too many fumbles
– Lacks strength to stalk block against CBs in the run game
– Gets jammed at the LOS when facing press coverage
– Despite speed, wasn’t used as a returner
– Feast/famine type player

Schwartz leapt to the top of our list after he said he had met/is meeting virtually with the Steelers during draft season. What also made him interesting is one trait. Speed. It wouldn’t be a stretch to say Anthony Schwartz is the fastest man in the NFL Draft and I would kill to have an electronic 40 time on him at the Combine. If there was anyone who could threaten John Ross’ 40 time record, it’s this guy. Sure, he’ll run at his Pro Day, and I’m betting he’ll be in the 4.2’s but with school-friendly, unofficial hand-times, it doesn’t feel as legitimate.

But make no mistake. The dude can fly. Best example of that here is this touchdown vs Tennessee. You know you have speed when you outrun a DB’s angles like Schwartz does to the safety along the sideline. Those “angle busters” are some of my favorite prospects to watch.

Schwartz also has above average hands and consistently catches away from his frame. He adjusts to balls thrown outside his immediate catch radius, too. There’s some ball security issues post-catch we’ll touch on in a moment but he does a nice job bringing the ball in in the first place.

On the negatives, his usage was very….college. Auburn manufactured him the ball on screens, RPOs, jet sweeps, and end arounds. Which is fine but it wasn’t traditional wide receiver usage. And he’s not so good you’re going to build your entire offense around getting him the ball in that way. It wasn’t often you saw him run a “real” NFL route. Anything outside of the quick game was a nine/vertical route to showcase his speed and expand defenses vertically. Despite his straight-line speed, Schwartz is a bit stiff-hipped and straight-linish overall.

That’s perhaps one reason why the Tigers never used him in the return game. Despite being the fastest dude on the field, he never returned a kick or punt in college. Mike Tomlin once joked if they weren’t going to let you return in college, you’re not going to do it in the NFL. I’d love to know the backstory of why he wasn’t used that way.

He did seem to have some ball security issues. Lost the ball in some form or fashion in three of the games I watched. Fumbles will get you sent to the bench in a hurry in the NFL. Doesn’t matter what your speed is.

Schwartz has a great calling card in his speed. No question about that. But the rest of his game left a good bit to be desired. He’s not the vertical threat even like former teammate Darius Slayton, who was a much better prospect. Schwartz’s use in Pittsburgh would be similar to how they’ve used Ray-Ray McCloud and the jet/short game route tree would have a home in Matt Canada’s offense. But Schwartz isn’t a guy the Steelers need to draft.  At best, he’s a Marquise Goodwin but I compare him more to an Aldrick Robinson as far as one-note deep threats go.