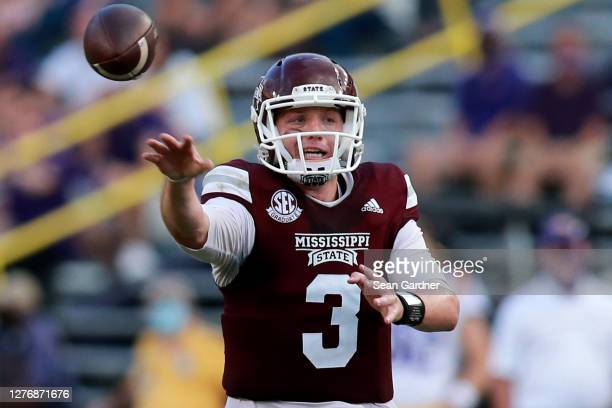 – Bit of a slight/lean build but has frame to grow into and overall, looks the part of an NFL passer
– Gunslinger, live arm, willing to take chances and rarely turns down option to make a play downfield
– Strong arm, lots of velocity on his throws with above average accuracy and placement
– Shows ability to make throws under pressure, willing to take a shot to complete a pass
– Able to read whole field and move through progressions
– Throws from a strong, sound base
– Has experience working in a pro style offense and playing under center
– Flashes moments of great play
– Plenty of starting experience

– Hot and cold player, incredibly streaky and stacked negative plays/games far too often
– Forces far too many throws, gunslinger mentality hurts him as much as it helps, and too reckless in his decision-making, trusts arm to get job done all the time
– Struggles with accuracy on short/medium throws, misses too many easy completions
– Showed terrible ball security and carriage and 2020, takes off-hand off the ball after reaching the top of his drop and lets ball hang low/away when moving within the pocket (appeared to be less of an issue in 2019 with Stanford)
– Has windup in throwing motion, causing more passes to be tipped than usual for a tall QB
– Statue in the pocket, has trouble getting off his spot and isn’t a threat to run past the LOS, slides at first sign of trouble
– Cooled off after hot start in 2020, ended up getting benched
– Didn’t play under center in 2020, Air Raid/shotgun offense
– Had unusual amount of issues of controlling shotgun snaps

Costello’s name popped on my radar right at the end of the 2020 draft when he was mocked to the Steelers in one of those silly, way-too-early 2021 mock drafts. They don’t mean anything but it implanted the thought in my head. So I wanted to circle back and check out his 2020 season. Which can be described as…turbulent. He started the year off red hot with an upset road win against LSU, setting an SEC record with 623 passing yards.

Costello is a big-bodied quarterback with a big arm. He’s not afraid to show it off either. And when he’s on point, he looks like a first-round talent. Couple examples of that. On paper, Costello has the arm to make throws to every level of the field and he can make “wow” plays.

And he does show toughness in the pocket to make throws when under duress. A must for any quarterback who wants to succeed in the NFL no matter what style of QB they are. Mobile, West Coast, Four Verts, doesn’t matter, you gotta stand tall when the pressure comes.

But Costello is a horribly inconsistent quarterback. On a mini and macro level. On the macro level, he had a strong game to beat LSU. But he fell flat on his face the rest of the way, getting benched just a couple games later. And on a mini-level, he makes as many negative plays as positive ones. The worst trait is the downside of the gunslinger mentality, forcing far too many throws and making too many terrible decisions. Couple examples of this.

His accuracy is scattershot, especially on short/medium throws. No QB is going to be perfect all the time, especially ones who threw the ball as often as Costello did in Mike Leach’s Air Raid (174 attempts in his first three starts…in that game against LSU, he attempted 60 passes while the Bulldogs ran just ten times), but he was still all over the place.

One thing that was very noticeable on his 2020 tape with the Bulldogs were ball security issues. I didn’t see it nearly as much on his 2019 Stanford tape but last year, he developed a terrible habit of taking his off (left) hand off the ball at the top of his drop and letting it swing low and away. Fumble-risk waiting to happen. Couple photos to illustrate that. 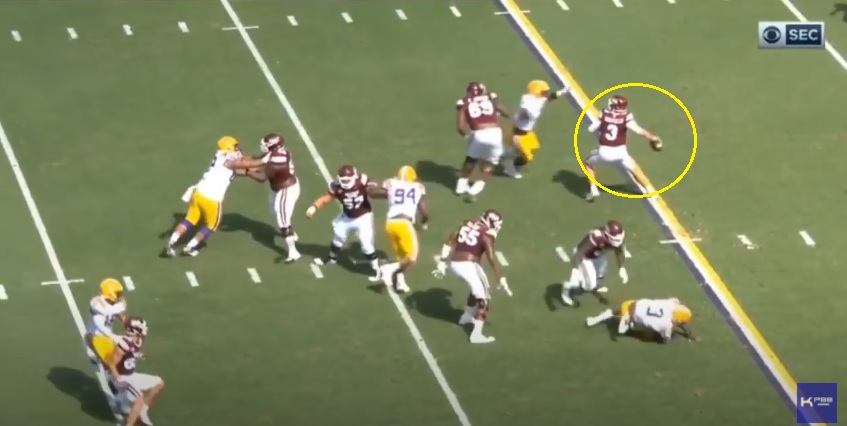 He’s also very immobile. Complete pocket passer who doesn’t move off his spot unless he has to. Costello is basically on a Ben Roethlisberger-level of immobility right now.

The dude has a strong arm and can make some impressive throws. It’s very much worth noting he looked and performed better at Stanford than Mississippi State. He willingly transferred to play for Mike Leach but it clearly wasn’t the right system fit. A more conventional, NFL offense is best for him. But right now, Costello makes as many bad plays as good ones and that level of inconsistency isn’t sustainable at the NFL level. My comp for him? A homeless man’s Jay Cutler or what Josh Rosen actually turned out to be (not what he was billed coming out of UCLA). Not someone I’m interested in Pittsburgh spending the energy on developing unless he falls out of the draft entirely.

Games Watched: vs Northwestern (2019 – with Stanford), at LSU, vs Arkansas, at Kentucky