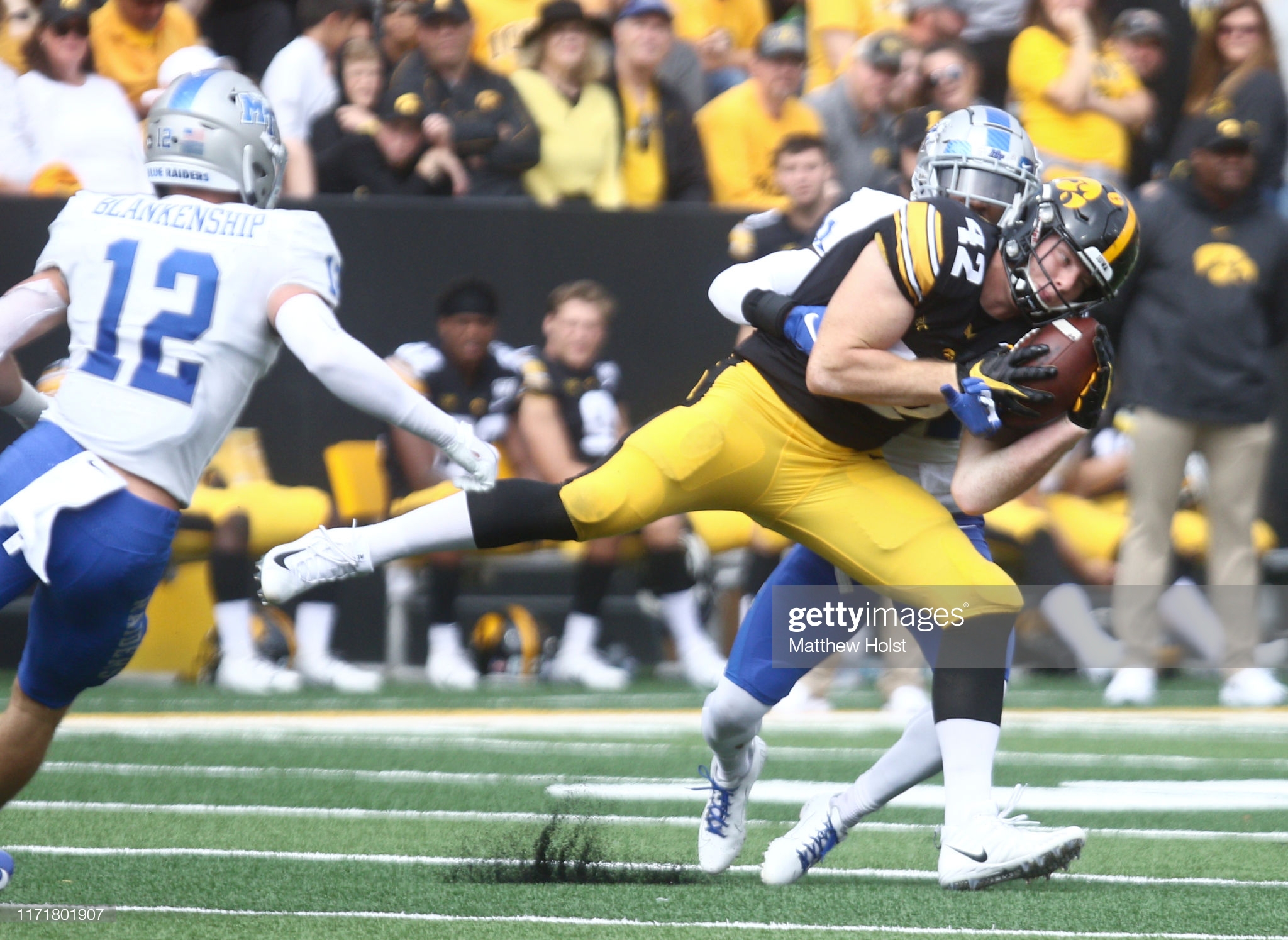 If you’re going to look for a tight end, the University of Iowa is a good place to start. Over the past 20 years they have produced a high amount of effective NFL tight ends. The list includes guys like T.J. Hockenson, Noah Fant, George Kittle, Tony Moeaki, Scott Chandler and Dallas Clark. Next up is Shaun Beyer. He was used inline, one the wing and in the slot.

In the passing game, he has good quickness out of two and three point stances and has solid acceleration off the line.  He can use a quick jab step to avoid defenders in his face for an easier release.  He has solid physicality and hip drop at the top of the route to try to create space. He was used on short and intermediate levels and had most of his success on crossing routes and up the seam. He has soft hands, adjusts to the ball well and can make the reception in traffic. He shows good effort in the scramble drill and looks to get a block for other receivers after the catch.  I didn’t see a lot of reps with him straight pass protecting. He did some slide blocks on passing plays and did enough to stay in front of his man.

Vs Miami (OH) he makes a nice adjustment on this crossing route to go down and get the low throw.

Vs Michigan State, he will duck around the defender on his release and run a crossing route making the catch and getting up field after the catch.

At Minnesota, it’s a seam route and the ball is underthrown but he hangs on to the ball with the DB closing in him.

Against Nebraska, this was his most athletic reception. He gets a clean release up the seam and makes a nifty one handed grab.

In the run game, the majority of his blocks were on the backside and he showed solid quickness on reach blocks, was very good on cut blocks and was solid cutting off the backside pursuer.  On the front side he got solid push on down and base blocks, displays good agility on slide blocks and solid quickness to the second level.  He shows good effort a blocker and tries to play to the whistle.

Vs USC, from the left wing he will get out in front of the jet sweep and he gets a little top heavy but is able to stay with his block.

Vs USC, he will slide block to the left and uses his hands well to lift the right arm of the defender off of him so he can get into his body and finish the block.

Vs Northwestern, he is in line to the right and will block down to the inside and sustain the block until the RB hits the lane.

Vs Michigan State, he is in line to the left and shows good agility and strength to square up the end man and drive him out of the play.

He has solid speed overall but he isn’t going to run away from anyone.  Physical defenders at the line of scrimmage can hinder his release. He is marginal creating space vs Man coverage and must improve creating with physicality. After the catch he didn’t show the ability to make defenders miss or create extra yards. Must improve on his pass protection, reps were limited and will need to work on technique. As a blocker his pad level can be a little high and needs to add strength to sustain and not fall off of blocks. Improvement in his lateral footwork would help his blocking as well.

Overall, Beyer has a solid release, soft hands and can make a contested catch or adjust to poorly thrown balls.  He has potential as a pass blocker and is a solid run blocker inside or in space.  He needs to improve his route running and he will need to work on separating vs Man coverage.  He could add play strength and must move his feet better laterally when engaged as a blocker.

He can have a role on a team as a number two tight end to be used as a blocker and would benefit from an offense that uses play action to help create receiving opportunities for him so he doesn’t need to rely on creating separation.