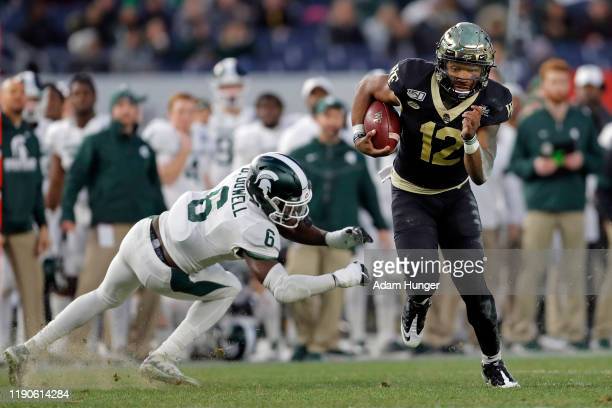 -Big arm overall; unafraid to cut it loose
-Shows good ball placement downfield with good overall touch on deep shots
-Consistently gives his guys a chance to make plays vertically
-Displayed willingness to hang in the pocket and take hits to make plays
-Able to make throws from different arm angles; showcased quick release
-Can make plays with his legs and add an element to the run game

-Wake Forest’s offense was a one-read system that didn’t ask Newman to progress through reads
-Really struggles with short-to-intermediate throws; pace and accuracy are erratic
-Has a tendency to stare down receivers, allowing defenders to read his eyes
-Did not show consistency with pocket awareness overall
-Lower body mechanics can get out of whack, leading to poor throws on easy reads

-Redshirt junior who transferred to Georgia for 2020 season, but opted out due to COVID-19 concerns
-Played in 21 career games for Demon Deacons, starting 12 games in 2019
-Finished three-year career with 3,959 passing yards, 35 touchdowns and 16 interceptions on 306 completions out of 506 attempts (60% comp.)
-Threw for 2,868 yards and 28 touchdowns in 2019
– Finished fifth in the ACC in passing yards per game at 239.0 and fourth in passing efficiency with a 145.3 rating in 2019
-Named 2018 Birmingham Bowl MVP after leading Wake Forest to a 37-34 win over Memphis. Newman threw for 328 yards and a touchdown and added 91 rushing yards and three scores in the win
-Competed in the 2021 Reese’s Senior Bowl in Mobile, Alabama

Few college quarterbacks can claim the amount of preseason hype heading into a season than former Wake Forest quarterback Jamie Newman could claim in early 2020 following a surprise transfer to the University of Georgia.

Newman, coming off of a terrific season in 2019 in which he led the Demon Deacons to an 8-5 record with video-game like numbers, shocked the college football world and landed with Kirby Smart and the Bulldogs in hopes of improving his NFL Draft stock.

Instead, citing COVID-19 concerns, Newman opted out of the 2020 season before then declaring for the NFL Draft without ever playing a snap in the SEC.

While some might cite the decision to opt out and then declare as a poor one for the former ACC quarterback in a deep QB class, the good news is Newman’s last performances on tape came in his terrific 2019 season.

The former Wake Forest star showcased terrific arm strength and ball placement on deep throws and really thrived in a wide-open offense. While that all looks good in the box scores and on highlight reels, Newman has a number of areas to develop in the NFL, which could hold him back from becoming a starter in the NFL until deep into his rookie contract.

Playing in a simple, one-read offense at Wake Forest certainly helped Newman put up massive numbers, but it also led to serious issues when that first read wasn’t there.

Throughout the season, Newman showed a tendency to stare down his targets after the first read wasn’t there, which allowed defenders to read his eyes and sit on routes, leading to turnovers.

Against Clemson in 2019, Tanner Muse baited Newman into this throw along the sideline, sitting on the vertical route to make the easy interception deep in Wake Forest territory.

You can see that after the bubble isn’t there initially, Newman locks eyes on the boundary route and never diverts his attention from there, making it easy for Muse to sit on the route and make a play on the football.

One thing I noticed with Newman throughout his 2019 tape was he lacked pocket awareness and the ability to move around and extend plays.

Flash forward to the 2021 Senior Bowl and he showed some good feel here, sliding around to avoid the rush before resetting and firing a dart between defenders to his receiver to move the chains.

He did a great job never dropping the ball below his waist, kept his eyes downfield, felt the rush throughout and did a great job with his feet, never losing his base and never coming out of a throwing position.

Newman excelled on vertical shots at Wake Forest, consistently giving his guys a chance to make a play on the ball downfield.

Newman always kept his shots in the field of play and was always on time.

You can see on this throw against North Carolina in 2019 that Newman is in rhythm, hits the top of his drop and uncorks a dime to Sage Surratt down the left sideline. I was really impressed with his touch and accuracy on deep shots.

At times, Newman showed comfort in the pocket, keeping his eyes downfield to let routes develop.

Against Elon in 2019, Newman did a great job holding onto this football just a split second longer to let Surratt split a trio of defenders. Newman hits him in stride with a perfect throw for the score.

You can see the release is not elongated. It’s quick with plenty of whip to it, allowing Newman to get a ton of velocity on his throws, especially downfield.

What I really like about Newman’s game comes down to his arm and his accuracy down the field. While he does struggle on the intermediate throws, not knowing how to switch from his fastball to a changeup, he sure does know how to place the football down the field.

Newman knew where he was going with this football before the snap against Elon in 2019, and he did a great job putting it where only his receiver could make a play for the score.

While he doesn’t rely on his legs overall like a number of quarterbacks in the NFL in today’s game, Newman does have the ability to add an element to a rushing attack, especially on QB power.

Here against Boston College in 2019, Newman did a great job breaking an initial tackle attempt before slipping into space. He has average long speed overall, but he has some power to his game and could be a weapon in the red zone for teams.

While he’s not the polished passer right now, his deep ball ability and frame to hold up on designed runs reminds me quite a bit of Jacoby Brissett.

With a full year off and some struggles in the Senior Bowl, it wouldn’t surprise me to see Newman drop to Day 3. He makes sense as a flier QB who could be a strong backup for years to come and could handle himself in emergency situations due to injuries. I just don’t think the upside is there overall to become a starter at the next level right now.