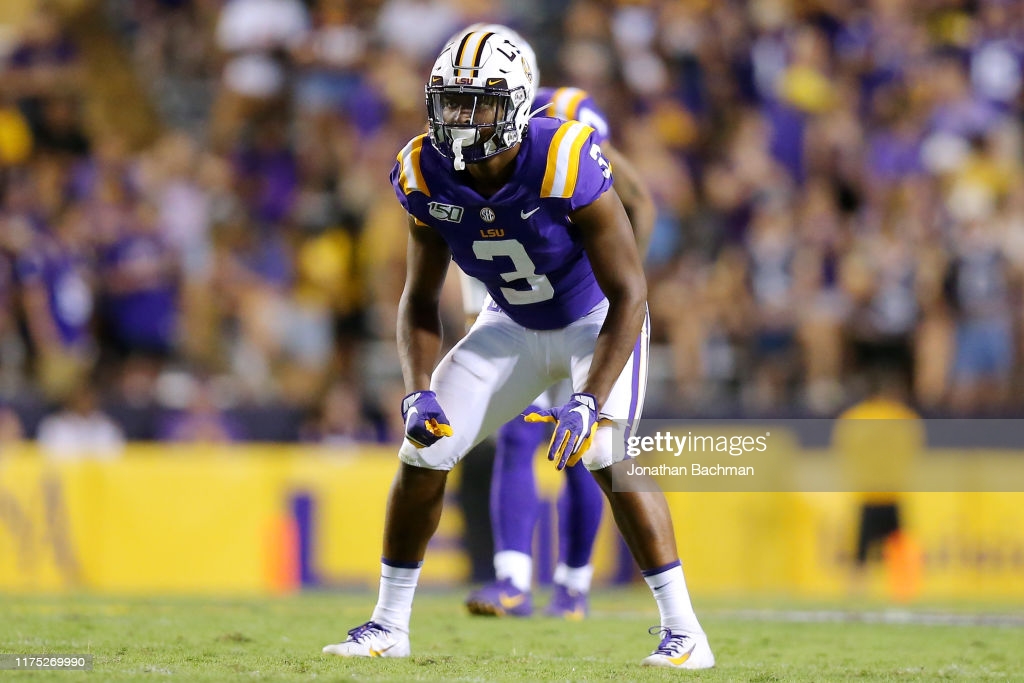 – Instinctual athlete with excellent size and physicality
– Was used in a versatile role, from single high safety to in the box as blitzer off the edge
– Disrupts timing of routes with violent re-routes
– Shows quick trigger and reaction time when aligned near or just outside of the box
– Shows range and lateral quickness in defending tight ends, slot receivers in man coverage
– Smart player who gets to depth in zone coverage drops and anticipates routes in his zone
– Shows ability to attack downhill on run plays and fill them with authority
– Good starting experience against quality competition
– Great ball skills with nose for creating turnovers

– Lacks top end speed and agility to function as single high safety
– Slow trigger against option and RPO plays
– Relatively limited range on backend in coverage with slow build to his burst in open field
– Solid tackler but had inconsistencies shedding blocks on the perimeter and when facing athletic guards, tackles who reached second level
– Struggled with attacking downhill on run plays as single high safety from depth
– Inconsistency with pursuit angles on explosive plays

JaCoby Stevens is one of those players who doesn’t have elite traits but has a nose for the football and causes disruption. The former five star recruit made a living wreaking havoc on opposing offenses from a variety of positions on the field. He’s made interceptions from the single high safety spot, and even rushed the passer off the edge. When plays are needed for the LSU defense, Stevens came through for them.

In this first play against Florida this year, Stevens realizes that it’s a RPO, blitzes and deflects the ball away, preventing the pass from getting to the endzone. Nice, instinctual play from the talented hybrid safety and linebacker.

In 2019 against Arkansas, Stevens had one of the best games of his career, recording four tackles for loss and three sacks. He does a nice job maintaining the edge and not allowing the quarterback to get outside of him, and great reaction and timing to nearly intercept the ball.

In those first two plays, Stevens was lined up as an edge player or overhang defender. This time, from his safety spot, he flies downhill and lays punishment to Heisman Winner Devonta Smith. He quickly shows a trigger on short and intermediate routes.

Stevens does a much better job staying in the hip pocket of his man when guarding tight ends and running backs in man coverage schemes. Against Florida, Stevens does a nice job maintaining contact with his man out of the backfield on a wheel route, stays attached to the hip and makes the pass break up. Impressive coverage.

Instincts, natural feel for the game continue to pop all over Stevens’ film. He reads the running back screen right away, doesn’t try to gamble for the interception, and makes a big tackle for loss. He makes up for his lack of speed or elite athleticism by trusting his eyes and instincts and being a physically imposing player.

However, on deep routes that require a quick trigger and range, Stevens struggles arriving on time to break up the passes. Against Ole Miss, Stevens is a single high safety, and simply reacts too late to the deep ball. He just doesn’t have the speed to make up any lapse in vertical coverage.

As physical and downhill Stevens plays. There are times where he is passive or reactive on running plays. Against Alabama, he did not attack upfield and allowed himself to be blocked on this play. For someone who probably translates best at the next level as a linebacker, he has to be engaged and consistent in his run fits.

There are times where guards and tackles reach the second level and wall off Stevens on run plays. Also against Ole Miss, Stevens is driven to the ground and sealed from making a play on the edge. He has to have a better plan of attack to get hands off of him and disengage from blocks consistently.

Final play from Stevens was from the Vanderbilt 2019 match-up. He makes a great play going vertical and snagging an interception on a boundary side vertical route. He makes plays with his instincts and ability to high point the football.

The talent is there with LSU LB/S JaCoby Stevens, and an NFL team will value his skillset and versatility. However, the NFL front offices are looking for freakish athletes who show a ton of upside and potential. With Stevens, you have a player who will make plays on the back end but has shown on film that when he’s isolated, he struggles.

I project Stevens as a SAM linebacker at the next level. Having him in rotation with guys like Devin Bush, Vince Williams and others from the Steelers linebacker group could provide them with an instinctual hybrid football player.