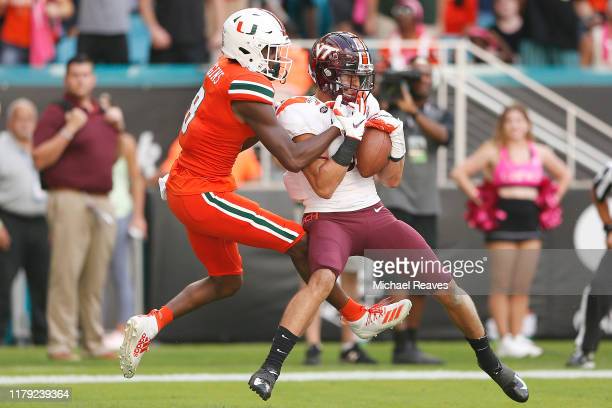 Thus far in the 2021 Draft season, I have spent the majority of my efforts looking toward slot replacements for impending free agents Mike Hilton and Cam Sutton.  Today, we dive into one of the elite boundary prospects in this year’s draft class, Virginia Tech’s Caleb Farley, who produced two years of elite level play before sitting out the 2020 season due to draft preparation and COVID concerns.  While Farley’s measurables jump off the screen immediately, he consistently stands out as one of the most technically sound, and NFL ready prospects in the class, making it hard to imagine him falling out of the top 20.

Farley, equally adept in press and off coverage alignments, can suffocate receivers with his footwork and disruptive length out of press, while his frame allows him to box receivers out on downfield targets.  Below against Miami, he matches the receivers outside release with a smooth mirror press before effortlessly flipping his hips, using an arm bar to maintain contact, and carrying the post route vertically with ease.  At the catch point, Farley does a great job, leaning on the receiver while turning to locate the football before displaying soft hands to secure an impressive interception.  Later in the same game, Farley displays perfect patience off the line before flipping effortlessly, tracking to the receivers upfield shoulder, and remaining calm to play the pocket at the catch point, securing yet another downfield breakup.

While his press coverage work is extremely advanced for a 22 year old prospect, his footwork and discipline in off coverage reps proves equally impressive.  Once again showcasing his elite hip mobility, against Miami, Farley stays patient off the snap, opening to match the receiver’s outside stem before deploying a beautifully executed speed turn to remain in phase, high pointing the football at its apex to secure a crucial pass breakup with his free left hand.

Catch technique, a niche technique used most heavily by slot defenders, can be an X-Factor in key situations, including red zone football.  Although his press and off coverage are both at elite levels for a college prospect, Farley’s ability to deploy catch technique situationally makes him nearly impossible to target in the red zone.  With Miami threatening at the goal line, Farley plants his feet at the goal line with slight inside leverage, matching the receivers outside release with a smooth shuffle before driving on the out route with proper eye discipline, undercutting the route aggressively, and turning to locate the football for his second interception of the afternoon.

A combination of advanced technical understanding of the position and elite measurables make Farley an elite prospect, but his patience, change of direction skills, and motor allow him to suffocate receivers on underneath routes.  Against Notre Dame’s Chase Claypool, a familiar face, he aligns at depth, taking three read steps before flying up to close on the hitch route with a perfectly executed T-step break.   Once in phase, he turns to eye to quarterback before immediately shifting to plaster in a scramble drill, matching the receiver upfield before breaking efficiently yet again to close toward the sideline, finishing violently while playing the pocket.  While the Claypool ultimately secured the wildly impressive combat catch, Farley’s elite motor and change of direction skills are hard to ignore on this rep.

While Farley is certainly at his best in man coverage assignments, his zone coverage abilities are certainly nothing to scoff at.  Farley possesses a great football IQ, maintaining a good understanding of route distribution and using his athleticism to execute his assignments accordingly.  Below, aligned to the trips side, working out of a Cover 3 Match scheme, Farley aligns at depth, effectively working vertically out of his pedal while maintaining proper outside leverage against the seven route.  At the catch point, Farley finishes with violence, laying a physical blow while playing through the receivers hands to dislodge the football, and force a crucial red zone third down attempt.

While most would be hard pressed to find complaints about Farley’s coverage skills, his consistency in proper tackling technique can certainly waver at times.  Although his frame allows him to deliver some punishing hits when able to square up a target, Farley can appear to lack desire at times when tackling on the edge.  In the first clip, Farley matches the receiver’s inside release before identifying the “crack-replace” situation, tracking the running backs near hip while closing ground, and wrapping up for a physical tackle to limit the bounce for a minimal gain.  On the next rep, from later in the same game, Farley follows his man’s motion into the box, reacting well and reacting downhill against the quarterback counter, yet inexplicably stopping his feet and ceding the edge for a game tying touchdown.  As Farley has inside help here, ideally you would like to see him attack with outside leverage, and take a physical shot, as even a missed tackle here will likely stop the backs progress and force him toward the pursuit.

While Farley possesses all the necessary coverage skills to develop into an all-pro level player at the next level, as with many developing corners, his major struggles come from momentary lapses in eye discipline.  Below against Notre Dame, he breaks on a Chase Claypool out route, driving with his eyes in the backfield, and allowing vertical separation on an out and up double move as a result.  While these are mistakes that should be expected from a relatively inexperienced player, learning to break with his eyes on the man rather than eying the backfield prematurely can eliminate mistakes like these at the next level.

Overall, Caleb Farley enters the 2021 NFL Draft as a consensus top two cornerback prospect, alongside Alabama’s Patrick Surtain II, with the measurables, coverage skills, and physicality to match the billing.  While Farley certainly could fit in any scheme, I believe he would be best utilized as a boundary cornerback, traveling with the opposing teams X-receiver, in a similar fashion to Tre’Davious White in Buffalo.

While it is extremely unlikely that Farley falls to the 24th pick, it would be nearly impossible to pass up on a potential franchise building block at the cornerback spot if he were somehow available.  A corner with traveling potential, Farley has the all of the ability and coverage acumen necessary to lock up a teams backside X with no safety help, allowing Tomlin and company the ability to heavy up zone coverage to the trips side of 3×1 formations.  Farley’s size, coverage versatility, and mentality while attacking the football remind me a lot of Patrick Peterson, although his lengthy injury history, with a 2017 ACL tear, which forced him to redshirt and 2019 back spasms, which sidelined him from his final two collegiate contests, could scare some teams away early in the first round.

Nonetheless, considering that Farley was a high school quarterback, his transition to quickly becoming a nuanced cornerback with a variety of elite coverage traits speaks to his freakish athleticism and relentless work ethic.  While it’s unlikely that Farley falls to pick 24, whichever team ultimately lands him will gain a player who appears ready to contribute immediately with All-Pro potential down the line.