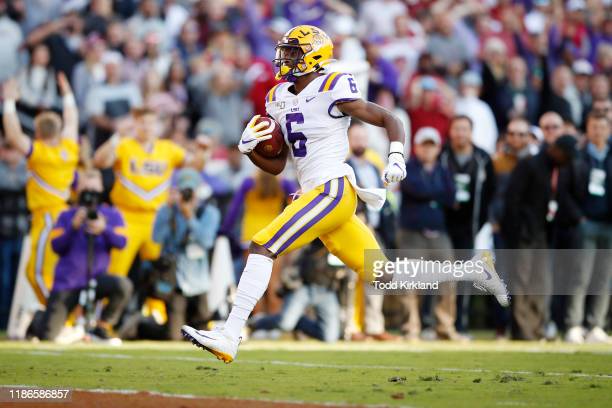 He was the number three wide receiver on the 2019 National Champion roster.  In a seven game run between 2019 and 2020 he had 41 receptions, 727 yards and 14 touchdowns. Producing touchdowns was something Terrace Marshall was able to do from the slot and outside and from just about any distance on the field. He opted out during after seven games in the 2020 season.

As a receiver, Marshall lined up all over the field and has good size and length. He has a good release versus off coverage getting up to speed quickly and showed good quickness and solid use of hands versus Press coverage including an aggressive jab to push back the defender. He varied his speed and techniques to keep defenders off balance and displayed a solid ability to separate with physicality at the top of the break and was very good separating with quickness and speed able to accelerate away from defenders.

His route tree was diverse, used on all three levels. He used quickness and acceleration on the short and intermediate levels and good speed to stack receivers on the deep level. He showed good hands, a good ability to adjust around his frame on the move and good awareness on sideline/end line throws. He tracks the ball well and high points 50/50 balls. After the catch he has very good agility to make defenders miss and acceleration to run away from would-be tacklers. He has the long speed to score from just about anywhere on the field.

Vs Clemson, he will run a slot fade and uses speed to get outside and slap away the hand of the DB before high pointing the ball in the end zone.

Vs Mississippi State, he uses a hesitation release, adjust nicely to the low throw and shows some of his COD and elusiveness to make a defender miss after the catch.

At Vanderbilt, from the slot to the top, in his release he use a dead leg followed by acceleration to get by his man and then makes a nice adjustment to flatten the route at the goal line to stay in front of the safety.

At Missouri, he runs a nice route from the stacked formation releasing to the inside before shaking back to the outside creating good separation and adjusts back to the low throw.

At Missouri from the back of the stack at the top, this is just straight speed to get on top of the DB, track the ball and take it the distance.

At Texas A&M, he’s running a deep In route from the outside (top of screen) and uses physicality at the top of the route to create space before showing off his acceleration to add about 43 yards after the catch.

Physical defensive backs were able to slow his routes when they were able to square him up. He had a couple concentration drops, taking his eyes off the ball before securing.  He doesn’t create much after contact with marginal play strength to break tackles. He is a poor blocker overall and especially in the run game.  His technique is lacking and is effort is even worse. Aggressive defenders ran right over him. He didn’t really help anywhere else with no rushing attempts, no punt returns and no kick returns in his collegiate career.

Overall, Marshall has very good size and speed, creates separation well and can add additional yards after the catch with change of direction and acceleration.  Physical defensive backs can disrupt his routes, he had some minor concertation issues and should not be relied upon to block for teammates.

In 2019, he was in the shadows of Ja’mar Chase and Justin Jefferson and still was able to pull in nearly 700 yards and thirteen touchdowns.  He had more yards and ten touchdowns in 2020 before quarterback injuries slowed his production.  He is scheme diverse and will help a team from the slot or as the Z receiver. After the big names go off the boards someone is going to get a good receiver who can make plays on all levels.