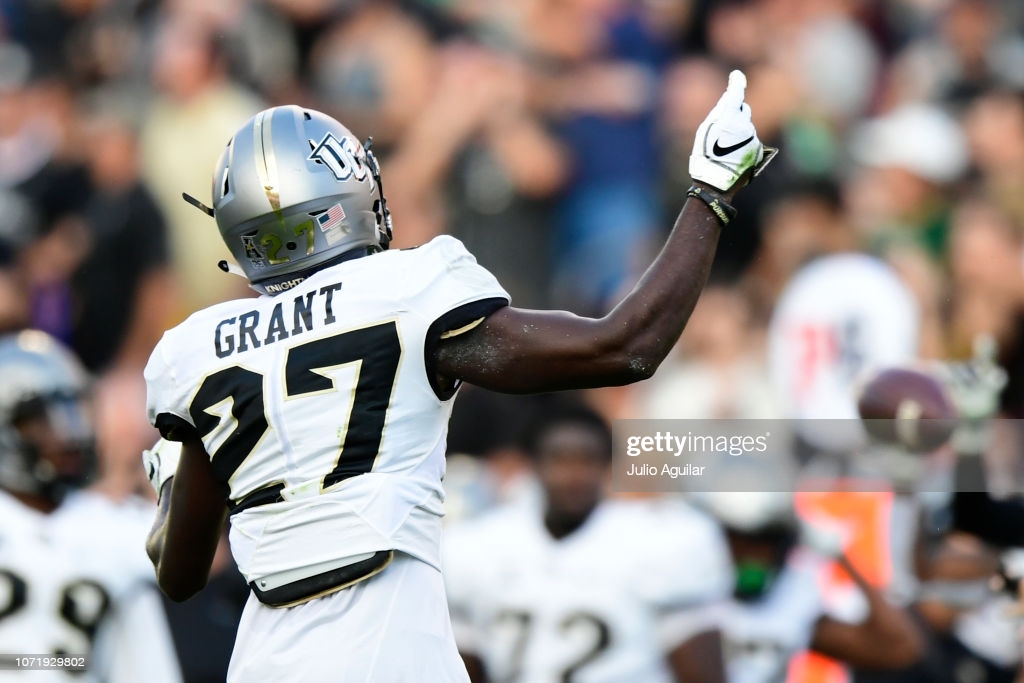 Today’s defenses are different than years past.  They are no longer clearly 3-4 or 4-3 and are much more of a hybrid that uses nickel more often than not.  Having players that are versatile are a benefit.  Richie Grant has that versatility.

Against the pass, Grant was used in just about every way you would want to use him.  He has the speed, range and mental processing to play the single high safety. When the played split safety he aligned to the field side and can get downhill in a hurry.  He aligned in the slot on tight ends and slot receivers and as the overhang defender when he wasn’t deep in Cover 1.  He can also align in the box to play one on one with tight ends or running backs.

He can play in Zone coverage and attempts to jam, shows good awareness of receivers in his area and was good passing off receivers in a matchup Zone. He gets good depth on his drops, has good acceleration to close on the ball and ball skills to attack the ball in the air. In Man coverage he was usually in off coverage was solid reacting to the receiver with good acceleration to run with the receiver on crossers or on deep routes.  He is a good open field tackler wrapping up receivers.  He was used to blitz from the slot, intermediate level and from the box.

At Georgia Tech, he shows off his range starting off on the far hash and making an interception across the field on the numbers.

At Houston, in the near slot he will break on the shallow In route and reach around the back of the receiver to get a hand in to break up the pass and help his teammate get the INT.

Vs Cincinnati, in the far slot he sits on the route and reaches around the front this time to break up the pass.

Vs Cincinnati, from the slot he will drop into Zone coverage, reads the QB and shows good mobility to break up the pass.

As a run defender, he has very good aggressiveness and likes to hit.  He is active no matter where he is aligned and will take on pulling offensive lineman and attack inside gaps and on the edge to make tackles. He has good acceleration and change of direction and avoids blocks well to the outside and when chasing from the backside. He has good awareness on reverses and misdirection. He is a strong tackler and will attempt to punch out the ball while making the tackle.

At Georgia Tech, the quarterback is going to scramble and Grant comes from the deep safety to say hello.

Vs Tulsa, in the red zone he shows no hesitation to accelerate into the backfield to stone the RB in the backfield.

At Memphis, he will come on a run blitz from the far side but the runner has a big hole up the middle. Grant shows the effort to not only chase him down but also force the fumble.

At Houston from the overhang position he is quick to fill the gap and makes the tackle near the line of scrimmage.

He had a couple coverage mishaps with his eyes in the backfield when playing in the slot.  In Man coverage he needs to show better awareness when dealing with rub routes to avoid getting knocked off the route. When coming downhill to tackle from the deep safety he could break down sooner to avoid missed tackles. Against the run, he can improve his angles to the outside with better aim to the front hip to not slip off of runners. His aggressiveness to get in the backfield can lead to misreads through the mesh point.

Overall, Grant is a defender with the versatility to play deep, in the slot or in the box.  He has good speed and range, can play in Zone or Man coverage and is a strong tackler.  He has some fine tuning to do in Man coverage, reading rub routes and his angles to the outside.

His ability to be play in different position and schemes will make him very valuable to a lot of teams.  His best position would be to generally play the free safety and be moved where needed depending on the defense. In Pittsburgh, he could play the nickel and be the number three safety and if they didn’t re-sign Terrell Edmunds next year he could be a starter making him and Minkah Fitzpatrick interchangeable.

Games Watched:  2020 – At Georgia Tech, vs Tulsa, At Memphis, At Houston, Vs Cincinnati