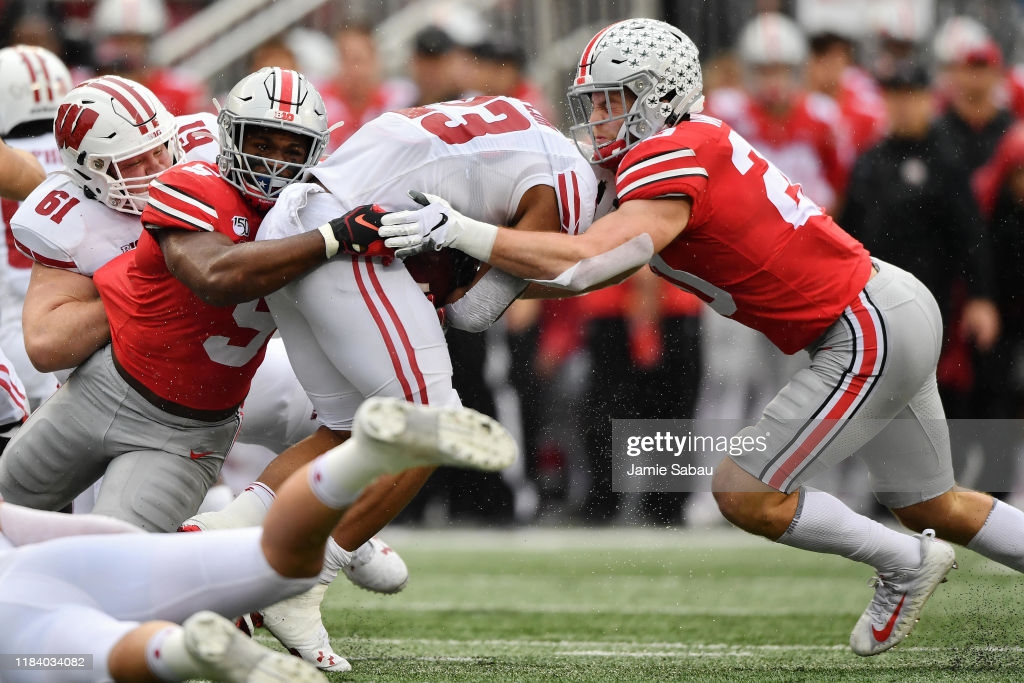 One of the sneakier needs for the Steelers this year is at off-ball linebacker. We were able to see the importance of the linebacker position in this Pittsburgh defense once Devin Bush went down. Robert Spillane filled in nicely, but once he also got hurt for an extended time it was a dumpster fire. Vince Williams is one of my favorite Steelers of my lifetime, but not sure how much longer the front office will keep him on the roster at his current salary, especially with the emergence of Spillane. In today’s NFL, you can’t get athletic enough at the linebacker position.

Coming into the Senior Bowl, Browning was a bit underrated and relatively unknown simply due to his usage at Ohio State. He opened a lot of eyes there with his athleticism and physicality, most notably, when he blew up Michigan fullback, Ben Gedeon, on a run play.

You may remember years ago, Vince Williams opened eyes at the Senior Bowl in a very similar fashion, blowing up a pulling guard in the hole during one of the practices.

Pretty sure this is the exact moment the #Steelers decided they had to draft Vince Williams. From the 2013 Senior Bowl practices, Vince just absolutely destroys a pulling guard. Listen to the reaction from the NFL Network. pic.twitter.com/hLd4J9TQ3q

Browning is one of, if not the most, athletic linebackers in this year’s draft class. He had a productive junior year playing the middle linebacker spot for Ohio State with 11 TFL’s and 5.0 sacks. He then was moved to outside linebacker, which in the Buckeyes system operates more like an overhang or rover player. In my opinion, the move stunted his growth and while he could play the role due to his athleticism, he never looked as comfortable there as he did at middle linebacker.

Browning is best when he can play downhill and shoot gaps, utilizing his best attribute, speed. In the below clip, from his junior season, you can see Browning’s sideline to sideline speed and explosive finish. He’s great at wrapping and doesn’t miss many tackles because of it.

There’s definitely some lack of instincts from Browning that come out from time to time. Sometimes it’s over pursuing a flat route. Sometimes you can tell he’s just thinking too much. These problems showed more during his time at this outside linebacker spot his senior year than at middle linebacker his junior year.

Here, you can see there’s a late shift that he has to follow across the formation. Then, when the ball is snapped, the tight end goes back across the formation in a split zone type look. You can see the gears start to spin for Browning and he gets caught between looking at his guy, the running back, and the quarterback who actually has the ball. The result is a deer in the headlights type play and the quarterback is able to gain the edge for a touchdown.

One of Browning’s best games of his career was against Penn State in 2019. He showed a little bit of everything in that game from coverage, to run-stopping and blitzing.

In the next two examples, you can see how good Browning is when reading and reacting to what’s going on in front of him. In both plays he sees the gaps forming to the left stays patient to not get caught in the trash, patiently slides, and makes the tackles.

Browning is extremely fast we know that. However, he doesn’t do a great job of turning speed to power in blitzing scenarios. In this clip, while Browning does get home for a sack, you can see he tiptoes to the blocker, before eventually beating him with his pull. It’s a great sack from Browning, but to me just showed the reason why many of his inside blitzes aren’t successful when going against backs.

Now when you give this guy a clear path to the quarterback, he’s going to get there and get there FAST. There’s zero hesitation in this rep and Browning almost causes an interception because of it.

It’s mentioned on a few draft websites that Browning can play EDGE and while he does have a few quality reps off the edge resulting in sacks, just can’t see him playing there much, if at all, at the pro level. His elite speed and acceleration do allow him to do things, like you can see below, against a top-tier program like Clemson.

Keeping on the topic of Browning’s speed, there’s no doubt about it he has sideline to sideline speed rivaling the likes of Devin Bush and Devin White coming out of college. There’s no better way to show off your speed by not letting a speed back like Travis Etienne get to the edge.

Here’s another example where you can easily see his insane play speed. This is from this past year when he was an OLB. You can see him at the bottom of the formation outside of the tight end. He pursues the backside of the play so easily, even being off-ball, and makes the play.

The other part of Browning’s game that jumps when you watch tape is his hit power. Unlike how he takes on blocking running backs if he’s trying to hit you he can use his speed to bring the juice. Here against Indiana, he sends the receiver into another dimension. Then gets excited about a job well done too. That will electrify any sideline.

The last thing I’ll talk about before going through Browning’s coverage ability is his block shedding. Watching his tape from the last two years I truly wish there was more to see in this part of his game. With his strength and 33” arms I was thinking I’d see more. Now he wasn’t getting reached and held onto by a ton of linemen, but the plays he did make were mostly him using his eyes and feet to get around blockers. So, I’m not saying he can’t do it, just wish I saw it more because it’ll be needed at the next level.

The best block shed I could find from him actually came during the Senior Bowl. He’s lined up on the line of scrimmage and makes easy work of the tight end before getting the running back for a loss on the play. Great rep to finish out a fantastic Senior Bowl week.

The first thing I wanted to point out about Browning’s coverage ability is the fact that the staff at Ohio State was confident enough of what he could do in space that they essentially lined him up at corner a few times throughout the year. Now, all of these plays were zone coverages where he ends up dropping to a hook curl zone, but it was shocking to see. Here’s one that he does just that and makes a solid tackle on the back out of the backfield.

Browning’s main attributes of speed and hit power carry over to his coverage ability too. The below clip is one of the few times he was lined up at middle linebacker during 2020 and you can see how much more natural he looks there. The initial alignment he has to cover the flat from the running back is extremely disadvantageous but with his speed, he’s able to easily catch the RB and deter the quarterback from throwing it.

Now we get to see Browning’s hit power make a difference in the passing game. He’s not fooled a second with Penn State’s play-action fake and reads the eyes of the quarterback perfectly. He finds the receiver and is able to use his agility and speed to lay the wood on the receiver just as the ball arrives, creating an incompletion.

Again we are able to see the confidence Ohio State has in Browning’s coverage ability letting him go 1-on-1 with Pat Friermuth, one of the top tight ends of this year’s class. Friermuth does slip off the line but Browning is able to stay in phase and make a great play on the ball in the air to get the big pass breakup in the end zone.

On this rep, Browning is lined head up with a tight end in the slot at the top of the frame. It’s a more traditional route, being a dig in the back of the end zone and while it may look like he’s getting a little handsy, no flags were thrown and he stays in the tight ends pocket the whole play.

The last thing I wanted to point out before we put a bow on this profile is the little things. I always look for little details in a player’s game that may tell more about them as a player than people think. Here, Browning trips at the snap and then gets blocked in the back (which wasn’t called). He has every reason to give up on this play. Instead, he sticks with it and tracks down the ball carrier 55 yards down the field. That’s a competitor right there and someone that I want on my team.

Browning is one of the most intriguing prospects in this draft class. I don’t think he’s come close to hitting his ceiling. Due to him playing out of position much of his career I feel like he has some Fred Warner, linebacker for the 49ers, in him with how he’s able to react with speed and agility. However, due to those same attributes, they both were played in a rover or overhang role in college.

I’m not going to put give Browning a Warner comparison because those are some big shoes to fill, but he has the same athletic ability. Where he needs to improve is the mental capabilities that come with playing linebacker and reading most of the field. He fits in most systems, but I see him fitting best as a 3-4 WILL.

While I don’t see him as a three-down player in the NFL right away I think he can certainly be a guy that can step into the right system and help situationally on day one. It was a shame the staff at Ohio State couldn’t find a specific role at one of the linebacker spots. That, paired with his inconsistencies on the field and lack of production, could cause some to be wary of him early on in the draft.

More specifically with the Steelers, I would love to pair Devin Bush with another uber-athletic linebacker. Everyone saw what happened to this defense when Bush went down and not only do I think Browning could provide that much-needed depth, I think he could be a playmaker on this defense for years down the road if he is able to focus on one position.