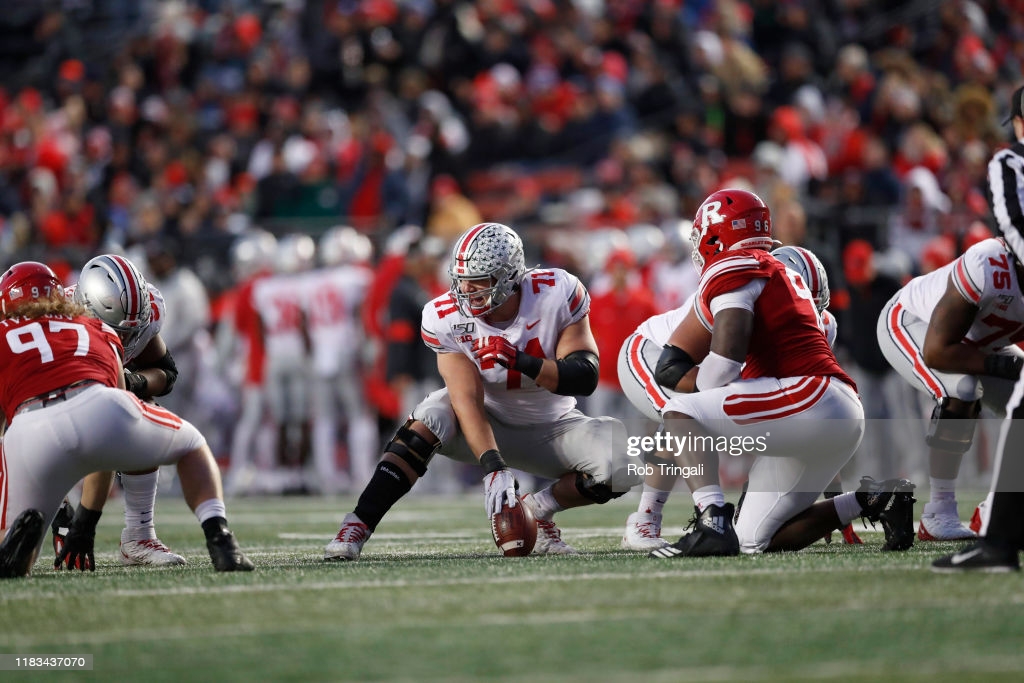 -Powerful run blocker with violent hands and impressive leg drive
-Explosive first step at the snap; body is in sync early in rep
-Can flat-out overwhelm defenders with length inside
-Smooth player overall inside, likes to be on the move
-Sound reaching the second level, able to adjust run fits on the fly when climbing
-Has the size, strength and short-area quickness to shift out to guard in a pinch

-Heavy feet overall in pass protection and struggles to consistently mirror
-More of a waist bender inside; does not sit into his hips well
-Hand usage needs a lot of work; must improve hand-fighting technique, needs to take advantage of length and lock out
-Tends to search for the kill shot a lot, which leads to whiffs in space
-Gave up far too much pressure inside the last two years

-Two-year starter at Ohio State, racking up 22 starts
-Played in 31 career games for the Buckeyes
-Named First Team All-Big Ten in 2020; Second Team All-Big Ten in 2019
-Mother, Julie, is in the University of Dayton athletics hall of fame as a basketball player
-Father, Brad, was an offensive lineman at the University of Kentucky between 1984-87
-Declared for draft as a redshirt junior

While the offensive tackle class is incredibly deep in the 2021 NFL Draft class, center isn’t quite as deep, considering there are not many high-end players in the class at the position.

However, that’s not to say there are not valuable, draftable players at the position.

Center in this draft class probably has 3-4 future starters at the position, one of which is Ohio State center Josh Myers.

A two-year starter for the Buckeyes, Myers has impressive size, good power overall, and a mean streak that lets him thrive in the run game inside.

He struggles with heavy feet in pass protection overall and allowed way too much pressure over two years as a starting center (six sacks allowed, 27 total pressures). Myers does well with the big, run-stuffing nose tackles, but he really struggles to hold up against defensive tackles lined up offset, as he can’t reach them with his heavy feet and limited agility. When guys are lined up directly over him though, he thrives in pass protection with strong hands and the ability to anchor quickly.

That’s a strong rep from 2019 against Clemson in the College Football Playoff. He does a great job shooting his hands quickly after the snap and sits into his wide base, controlling the rush.

Myers is a very smart football player who knows what defensive fronts are trying to do against the Buckeyes. Here against Alabama in the 2020 College Football Playoff National Championship, Myers does a great job passing off the twist by the Crimson Tide.

I like the way Myers has some added power behind his punch to Christian Barmore, passing him off to his guard, before then handling the twist with ease, winning with a good initial punch.

I genuinely love the way Myers holds up in pass protection when he has a nose tackle over him. He’s a good hand fighter inside in these situations and rarely gives up ground, relying on his impressive strength to win early and control the rep.

The power shows up in the run game too. His initial punch is very powerful, as evidenced by his punch here to the Northwestern linebacker, stunning him to win the rep, allowing Trey Sermon to explode into the second level.

One thing I noticed on tape was that Myers is able to chip and climb easily. He does a great job here against Indiana in 2020 with the downblock to clear a lane, and then does a great job peeling off to pick up the unblocked defender, allowing Master Teague to burst into the second level.

Myers isn’t the fleetest of foot, but he has good initial explosion after the snap in short areas. He does a good job reaching the Alabama defensive tackle quickly in the rep, allowing him to roll his hips underneath him, gain inside control and finish the rep with tenacity.

While Myers certainly has his good qualities, I am worried overall about the heavy feet in pass protection and the waist bending he often does, leading to some ugly reps. He plays with serious intensity and loves to search for the pancakes that make the highlight reels, but it leads to some ugly whiffs and ugly reps.

For him to reach his full potential in the NFL, he appears best suited for a power run game offense where he can use his great length and power moving downhill. He feels like an early Day 3 guy right now that can come in and fix run game issues.