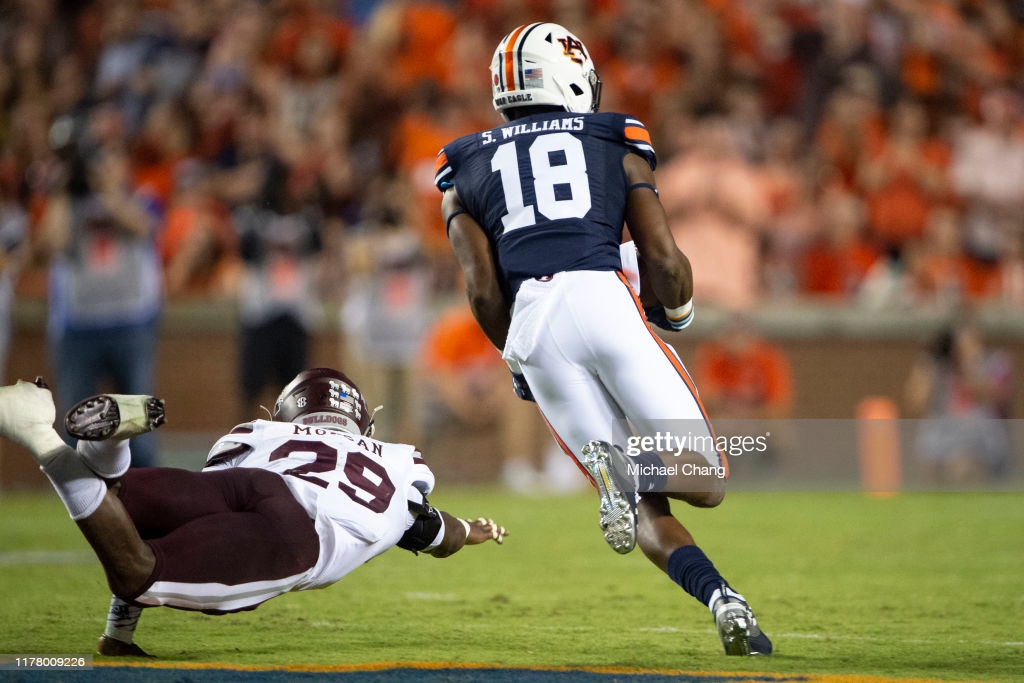 -Has the prototypical size and length you desire for a boundary receiver
-Demonstrates great explosiveness in his jumping ability
-Long strider that can build speed downfield
-Was used both on the boundary and in the slot for the Tigers
-Strong, natural hands for the position with the ability to squeeze the ball in from all angles
-Can make the catch from a variety of platforms going to the ground or up high in the air
-Possesses great contested catch ability with his length and vertical leap
-Can adjust to the ball being thrown and made the back shoulder plays against the holes in coverage
-Able to body up defenders in the end zone or along the sideline and box them out for the jump ball like a basketball player
-Has a good catch radius to make catches well outside of his frame or on off-target throws
-Plays strong over the middle as a possession style chain mover
-Physical receiver that will play through contact to make the catch and looks to break tackles as a runner
-Comfortable playing against press coverage at the line with the strength and length to fight off of the defender’s jam
-Willing and capable blocker out on the edge in the WR screen/ run game

-Junior prospect from Cottondale, Ala.
-Played both as a receiver and safety as a prep athlete
-Multi-sport athlete in high school, being an all-state honoree in basketball and a state medalist in the long jump and high jump
-Played immediately as a true freshman starting 9 games and racked up 26 catches for 534 yards and 5 scores
-Saw his role increase as a sophomore, playing in 12 games and logging 830 yards on 59 receptions and 8 TDs
-Saw his numbers dip a little in 2020 with a shortened season, registering 47 catches for 760 yards and 4 scores in 11 games played
-SEC All-Freshman team, third team All-SEC as a sophomore, 2nd team all-SEC as a junior

When watching Auburn upset Alabama in the Iron Bowl back in 2019, one player that stuck out to me was WR Seth Williams. The Crimson Tide were known to have athletic, physical corners in Trevon Diggs and Patrick Surtain, but Williams had moments where he asserted his dominance on them. Williams shows his ability to win vertically with a circus catch going to the ground against one of the best corners in this year’s draft class, #2 Patrick Surtain.

He also shows good sideline awareness and the hands to snag the ball on the back-shoulder throw against #7 Trevon Diggs.

Seth Williams from Auburn is the quintessential “big bully” WR prospect that has been possesses the prototypical build for the outside in today’s NFL. His size, length, and leaping ability make him a threat to come down with the ball in nearly any situation. His background as a high jumper and all-state basketball player make him the ideal contested catch target in the red zone for QBs needing a big body. On this play vs Kentucky, he climbs the ladder with two defenders around him to go up and get the ball at its apex.

He is the prototype teams look for in a red zone threat being able to come down with tough grabs thanks to his catch radius and athleticism. Here is a clip of a TD catch he make as a true freshman against Texas A&M in the back of the end zone.

Williams showed during his time at Auburn that he is comfortable playing through contact and can come down with combative catches. On this play, he wins the 50/50 ball against draft-eligible CB #1 Kelvin Joseph, taking the ball off of his helmet with his long arms and strong hands.

QB play for the Tigers over the last couple years didn’t do him any favors, either, as he often had to deal with erratic passes from his signal caller. For example, he comes down with the ball here in contested coverage, but his QB leads him out of bounds instead of giving him a chance to make a play.

Williams works well as an intermediate chain mover as well, being able to pick up the tough yardage over the middle. Here he snags the ball out of the air on the inside slant against Ole Miss knowing he is going to get hit.

However, in the above clip you see Williams’ limited ability as a route runner. He doesn’t have quick feet or the ability to come out of his breaks fast without losing any speed. He can tend to route his routes at times rather than making crisp cuts. Here is another example against South Carolina and Jaycee Horn where he struggles to get any separation out of his break, allowing Horn to play the ball and tip it into the air, resulting in an interception.

Williams has his positives as an athlete, but his deep speed and ability to change direction aren’t the best. He can be slow in these transitions and doesn’t stack corners great on the deep ball, resulting in him having to make a combative catch in traffic than being able to pull away from the defender and create separation. His physical presence makes up for it in most cases, but he will face athletic press man corners that won’t be as easily taken advantage of at the next level.

Overall, there are knocks to Williams’ overall game as a technician and separator, but he has the athletic traits, size, and physical demeanor you can’t teach. He often struggled with erratic QB play during his time at Auburn, but made the most of it, showing his ability to create impressive highlight real plays on off-target throws. He has great body control when in the air and has the sure hands to be a viable target in the red zone. Williams would be best suited for an outside receiver role in a more pro-style, run heavy approach that occasionally takes its shots deep and needs a reliable target to work over the middle.

When watching Williams, Corey Davis comes to mind as a big, physical possession style receiver that can win contested catch situations as a threat on the boundary. He should come in right away and provide a physical presence to a receiver core as well as a suitable blocker and special teams player. If the Steelers want to look for another big-bodied, red zone specialist than can move the chains and utilize Johnson and Claypool more on the inside, Williams can be a guy they could look to. Should he improve his route running, Williams would lock himself into a starting caliber role for many years in the league.