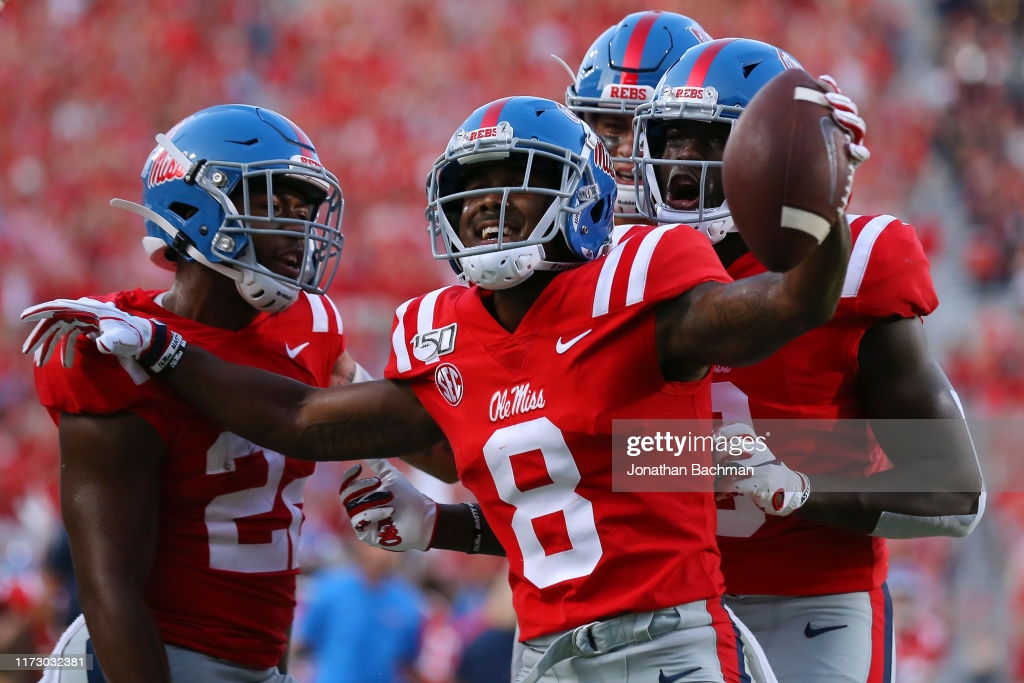 As I have mentioned in some of my previous player profiles on wide receivers, slot receiver could potentially be a need for the Steelers in the 2021 NFL Draft (it depends on what happens with JuJu Smith-Schuster in FA).  There are a good group of slot options that the Steelers will have the ability to pick from, if they so choose.  One prospect that could fit the bill is Elijah Moore, a junior coming out of Ole Miss.  Moore broke out in his 2020 season under head coach Lane Kiffin, after spending time behind the likes of A.J. Brown and D.K. Metcalf on the target priority list earlier in his career (2018), and following a solid statistical showing in 2019.

Moore could be the type of receiver that the Steelers envision for new OC Matt Canada’s offensive scheme.  He is versatile and dynamic, and was heavily utilized in motion at Ole Miss.

This first clip is from Ole Miss’ 2020 season.  They are playing Vanderbilt.  This play gives an introduction to Moore’s ability as a route runner.  Moore runs a sluggo (slant + go – double move) route where he shoots forward at the snap then bursts into the look of a slant route before snapping back vertically for a go route.  He uses his head and body to sell the slant by cutting hard then putting his eyes on the quarterback after the initial cut.  When the defender bites, Moore is then able to get his head and body back vertical.  He then has open room to run.  He gets his head around again to track the ball and finishes the play by holding on through contact.

In the same game against Vanderbilt, Elijah Moore gives an example of how he is able to create separation in his routes.  He’s lined up field side and as he begins to run his route across the middle of the field, his defender stays patient and sticks with him.  Moore then uses the defender’s positioning against him.  Moore allows the defender to get on top of him to which he then steps on the defender’s toes and leans into him, giving himself the opportunity to plant then quickly cut away from the defender.  This quick cut creates just enough separation for his quarterback to make a throw.  He then jumps in the air and high points the ball as the defender catches up.  Moore makes the catch despite being hit in the air.

This is another clip from Ole Miss’ 2020 game vs. Vanderbilt.  Moore is in the slot boundary side.  At the snap, he darts forward and evades the defender in his path.  He then finds some open space in the zone and tracks the ball to reel it in with converging defenders closing in.  Immediately after making the grab Moore side steps the safety that tries to lay a hit on him, then continues upfield where he finishes through contact with multiple defenders, showing toughness.

This clip is from Ole Miss’ 2020 game against South Carolina.  It’s another display of Moore’s ability as a route runner, as well as his quick change of direction skills.  Moore is lined up in the bunch set field side, and after the snap he begins to angle his route towards the middle of the field.  As the defender commits to the inside, Moore stops on a dime by dragging his foot to cut outside towards the sideline.  Moore has his man beat so he sits down in open space for an easy completion.  He then picks up yards before being taken down by converging defenders.

This clip from the same game vs. South Carolina is one example of Moore working against press coverage.  Earlier in the game, South Carolina was giving Moore free releases, so they later decided to press him on certain plays with Jaycee Horn (a top 2021 NFL Draft cornerback prospect), even when in the slot.  Here, Moore (left side of the screen in the slot) utilizes a foot fire release that he often uses when pressured.  He is able to generate momentum towards the outside in order to get Horn moving that way so that he can explode inside on the slant.  He also won another press rep against Horn with 8:57 remaining in the fourth quarter of the game.

This clip from the same South Carolina game depicts Moore’s ability to make something happen with manufactured touches.  Like some of the other slot receivers I have reported on, Moore is another guy that is often sent in motion to influence defenses or make plays with the football.  On this play, Moore is lined up in the backfield and is able to navigate his way upfield for a first down after receiving the ball.  He displays quickness, burst, and field vision with the football.

In this clip from Ole Miss’ 2020 game against Alabama, Elijah Moore showcases his sticky hands as his fingertips magnetize to the ball right before it’s about to impact the tips of the blades of grass.  Moore gives his QB an outlet by coming back to the football, and despite having to reach down for the low throw, he’s able to secure it and generate yards to pick up a first down.

Elijah Moore displays his crisp route running yet again in this clip from Ole Miss’ 2020 matchup with Mississippi State.  Moore is able to slip behind the deep, field-side safety of the zone defense with smooth cuts as he sells the outside-breaking corner route before angling vertical and bringing his head around to get his eyes on the football.  He has to decelerate a little, but he’s able to catch the pass with the defender quickly closing in and creating contact after he secures it.

This clip from Ole Miss’ 2020 game against Florida depicts Moore’s RAC ability.  He’s the middle receiver in the three-receiver set field side.  As the quarterback (Matt Corral – I’m interested to see how he plays in 2021 because he made some awesome plays on film when I was watching Moore.  He has some intriguing traits but needs to work on his decision making) delivers a great ball, Moore displays his soft hands as he snatches the catch helmet level without losing speed.  He then continues upfield past the first down marker with quick feet and finishes the run hard by absorbing contact from two defenders, displaying another example of toughness.

In this clip from the same game vs. Florida, Elijah Moore is able to create separation then track the deep ball to secure it with a defender directly behind him.  Moore’s ability to track the football allows him to come away with these catches, even with a defender near or in his vicinity.  He isn’t going to outmuscle bigger defenders, but he does a great job of creating separation then positioning himself to make a play through tracking the ball, and his sure hands help him come down with grabs.  He competes at the catch point despite his size.  While it may be harder for Moore to win contested catches in the NFL, he was able to do so in college.  According to PFF, Moore had 20 contested catches over his last two seasons at Ole Miss.

This clip from his 2020 game against Alabama shows Moore (top of the screen) working out wide against press coverage.  While I think Moore’s ability as a route runner will allow him to play outside in the NFL, I also think he needs to further develop his releases and the ability to use his hands against physical corners.  Moore wasn’t asked to line up outside very often in the games that I watched (even less so against press), but this play is an example of where he was removed from the play due to physicality in press from the DB.  While the play seems to be schemed for the QB to look for the wrapping tight end who ends up covered well, Moore is taken out of the play completely through being outmuscled out of bounds.  In my opinion, Moore will be better off as a Z receiver when outside in the NFL so he isn’t exposed to an immediate jam from bigger defenders.  He will definitely provide value as a slot receiver straight out of the gate, but I think with the advancement of his technique he should be able to take snaps outside as well.

Elijah Moore’s size/build limits his ability to effectively block when needed.  In this clip from Ole Miss’ 2020 matchup with Mississippi State, the defender easily disengages with Moore’s (slot field side) block in order to make a play on the ball carrier.  His NFL team shouldn’t focus on using him to block play side.  While he did show some effort in his games, he’s much more suited to be blocked for with the ball in his hands.

Certain aspects of Moore’s game remind me of former Pittsburgh Steeler Antonio Brown.  While Moore has a long way to go to reach the same level of ability and success as AB, the way he was used on screens in 2020, along with his polished route running, sure hands, big play RAC ability, and size/build make the two comparable.  To temper expectations, another guy that I think Moore shares some similarities with is Jamison Crowder.  Crowder is also similar in size/build.  He’s had a productive career in the NFL where he’s made his money operating out of the slot.

Elijah Moore is one of the many talented wide receiver prospects in the 2021 NFL Draft pool.  I stated in my report on Amon-Ra St. Brown that the receivers who will likely be available early to mid-day two, will provide excellent value to the franchises that draft them.  With the long history of the Pittsburgh Steelers and the wide receiver position, I wouldn’t rule out an early receiver selection in the upcoming draft, especially with the uncertainty surrounding JuJu Smith-Schuster’s future.  I think Elijah Moore is a high-upside WR for teams to target early day two.  He will likely (and hopefully in my opinion) be one of the many slot options on the Pittsburgh Steelers’ radar should they choose to look for a wide receiver early in the 2021 NFL Draft.