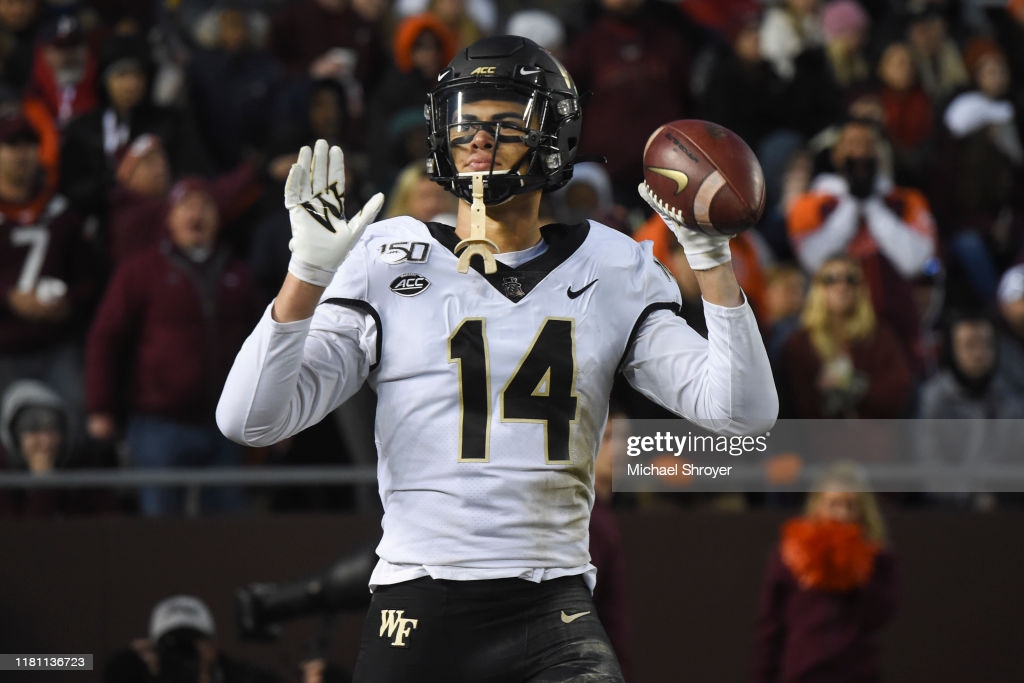 -Physical wide receiver that battles through contact well at the top of his routes
-Chunk-play producer over the top who consistently wins in contested catch situations
-Absolute bully-ball wide receiver
-Comfortable lining up out wide or in the slot with a good handle of route tree
-Super physical at the catch point; won’t be out-muscled by any defensive back
-Soft, reliable hands to rip the ball out of the air
-Impressive overall body control

-Lacks the long speed of a true take-the-top-off receiver; won’t run away from anyone
-Tick slow getting into and out of his breaks
-Twitch/suddenness just isn’t part of his game
-Labors to create any kind of separation downfield
-Struggles to vary releases against physical corners due to diminished short-area wiggle

-Opted out of 2020 season due to coronavirus concerns
-Named First Team All-ACC wide receiver in 2019
-Finished an impressive 18-for-30 on contested catches in 2019, according to Pro Football Focus
-Career average of 111.2 receiving yards per game is eighth-best in ACC history
-Set Wake Forest school for most consecutive games with a touchdown catch with seven, including the first five games of 2019
-Finished two-year Wake Forest career with 107 receptions for 1,582 yards and 15 touchdowns in 22 career games played
-Brother, Chazz, was a star linebacker at North Carolina and is part of the 2021 NFL Draft class

It feels like Wake Forest wide receiver Sage Surratt came along a few years too late to the NFL game.

A bully-ball wide receiver who lacks overall long speed and quick-twitch abilities, Surratt doesn’t quite profile into what seems to excel in the NFL today: freakish wide receivers who are great route runners and test off the charts.

That won’t be Surratt, but he sure produced at Wake Forest in two years with the Demon Deacons.

A 2020 opt-out citing coronavirus concerns, Surratt’s last looks on tape were spectacular in 2019, pairing with Jamie Newman to provide the Demon Deacons with an explosive, fun-to-watch offense.

Though he’s not a burner by any stretch, Surratt had a knack for making plays down the field, thanks to his impressive body control and his power to win at the catch point time after time.

You can see there’s not much separation there at all on the go route down the left sideline for Surratt. Aside from an outstanding throw from Newman, Surratt is strong enough to win through contact and get his feet down inbounds for the chunk play.

He makes go balls look so smooth overall, thanks to his body control. He tracks the football so well in the air and has a feel for when to flip his hips and make a play on the football.

As a former high school basketball standout, he knows how to box out and high point the football, which helps him win in these situations at a startlingly-high clip.

That body control and overall power at the catch point comes in handy in the red zone too, where I think Surratt could be quite the weapon in the right system.

With the Boston College corner draped all over him, Surratt makes this score look so easy, trapping the ball against his chest with one arm while fending off the defensive back with the other, putting points on the board for Wake Forest.

You can see he’s not going to run away from many cornerbacks, but he has some savvy to his route running abilities, plays through contact extremely well and has enough power with the football in his hands to be a tough tackle in space.

If you give him a free release as a corner when he’s working deep, you’re going to allow him a runway to work deep. Getting hands on him right away and throwing off his timing will completely disrupt plays and take the vertical look away with him because he simply doesn’t have the long speed to cover up timing issues.

While known for his chunk plays at Wake Forest, I often saw a guy who was unafraid to go over the middle, make tough catches in traffic and help move the chains.

You’d like to not see his quarterback put him in situations like this very often, but he has the ability to serve as a functional possession receiver in a West Coast-style offense where moving the chains and creating after the catch are paramount.

He just felt like a solid possession guy the more and more I watched. He’s strong at the catch point whether its underneath or vertical, and defensive backs are going to have a heck of time bringing him down in space alone.

Overall, I think Surratt could be a really solid No. 2-3 on a team that emphasizes underneath plays where YAC is a necessity.

Surratt broke 17 tackles on 65 catches in 2019, and while he won’t turn short throws into homerun plays, he’ll dish out some punishment and wear down defensive backs throughout games in this type of role.

I just can’t see a team drafting him to be a vertical X that they ask to win deep, contested catches as often as he did in the NFL. With his lack of burst and twitch, he feels more like a guy that could excel underneath and occasionally make the chunk play, kind of like Michael Floyd type.