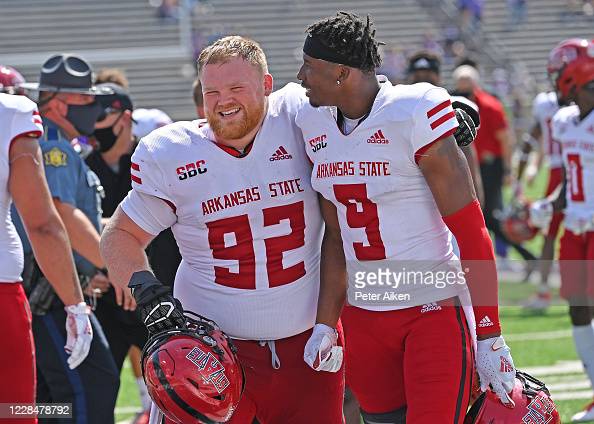 The Steelers have drafted a defensive lineman in eight of the last nine years and depending on what happens with their free agents they may be looking to take another in the 2021 draft. Forrest Merrill was the 0 tech/nose tackle in Arkansas State’s 3-3-5 defense.

Against the pass, he shows solid quickness at the snap and plays with good leverage.  He uses good hand placement and hand strength to get his hands into the blockers chest and grab hold.  He has solid leg drive to get a good initial push on power rushes to shorten the pocket. Motor is not an issue anywhere in his game. He constantly fights to get to the ball and when rushing will use a swim, club, push/pull and a spin move to try to beat blockers.

At Memphis, his motor is on display when the pass rush doesn’t he works to chase down the swing pass and create collateral damage on the tackle.

At Kanas State, he uses good snap quickness, leverage and tenacity to get s good push on the center into the pocket.

Vs South Alabama, he will swipe the arm of the center and swim over him to get in the backfield quickly and record the sack.

Against the run, he is a fire plug in the middle of the defense.  He again plays with good leverage and hand placement and has good play strength.  He displays good mental processing to read and react to blocking schemes. He can hold his ground against base blocks and a solid ability to shed blockers to attacks his gaps.  He has a solid anchor vs double team and works to split blockers. On outside run she shows solid lateral agility and play strength to push blockers into the gaps in front of him. Good awareness on screens and was able to disrupt a few in the games watched. He is a strong tackler not letting runners out of his grip and has very good pursuit all over the field.

At Memphis, a good example of his effort here after a teammate can’t bring down the runner he is able to pursue and trip up the runner.

At Kansas State, he uses leverage and strength to stand up and shed the center and work to his left to make the tackle on the runner.

At Appalachian State, against an outside run he can’t get his head across but uses his play strength to drive the center into the gap to close it off.

Length may be an issue. His arms don’t look long. He takes short, choppy steps limiting his forward power and explosiveness.  His change of direction is poor and takes a few steps to reverse engines and lacks ankle flexion and will slip out when trying to turn a corner. He would benefit from disengaging from blocks quicker.  Down/Pin blocks are able to move him and he has difficulty getting around them. On outside runs he can’t consistently get his head across blockers to beat them to the outside. Solid awareness on cut blocks and marginal foot speed to chase down from the backside.

Overall, Merrill is a strong run defender with solid quickness, good pad level and hands strength that can shed blockers. He has a high motor and is a maximum effort player who gets occasional pressure on pass plays. He has some extra weight on his frame and his length, foot speed and COD limit his ability to make more plays.

Merrill fits as a rotational two gap, early down run defender as a 0/1 tech. He shouldn’t be relied upon to be a pass rusher.

Games Watched:  2020 – At Memphis, At Kansas State, At Appalachian State, At Louisiana, Vs South Alabama