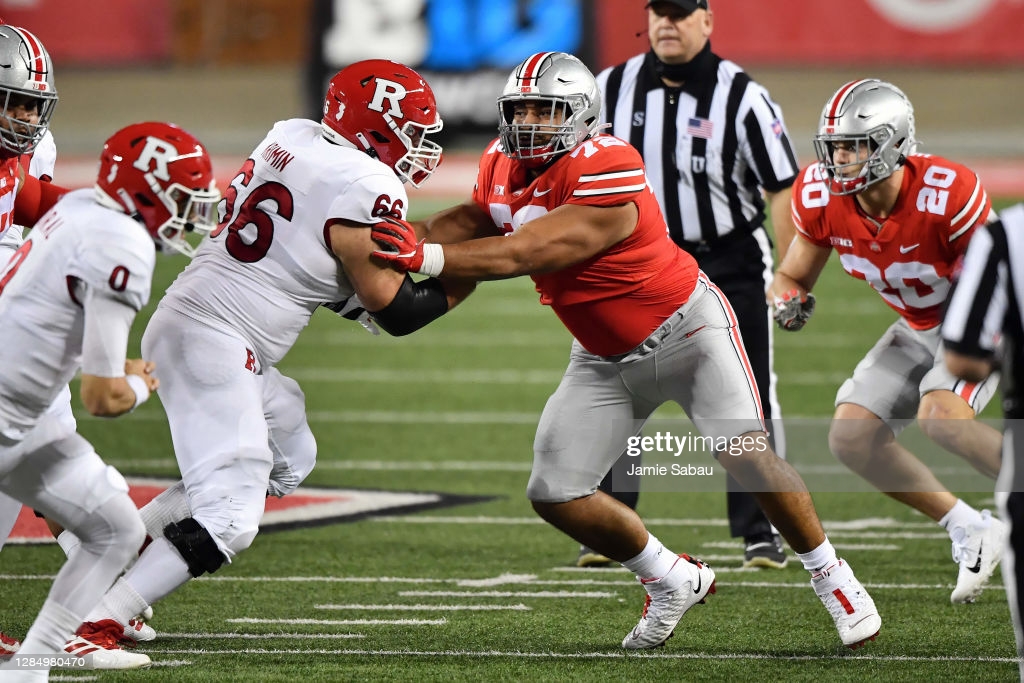 -Has fairly good speed and movement skills given the position he plays
-Has great play strength when it comes to pushing blockers back
-Plays with great leverage on the interior, possessing a strong, stocky frame
-Has good burst off of the snap of the ball
-Will anchor in and drop his hips against blockers to avoid giving any ground against the run
-Lined up all over the defensive line for the Buckeyes playing outside shade of the guard to head-up on the center
-Can take on double teams rather effectively and hold his spot
-Uses his hands well when it comes to stacking and shedding blockers at the LOS
-Good mover laterally along the defensive line
-Gives a lot of effort to collapse the pocket from the interior, keeping the QB from stepping up
-Plays with a motor and will play chase to the passer, as well as the running back
-Has the awareness to get his hands up in passing lanes if he can’t win with his rush
-High-energy defender and plays with a noticeable edge, taking pride in his work

-Lacks ideal height and size to man the middle of a traditional nose tackle
-Is more of a pocket pusher as a pass rusher than an explosive finesse rusher
-Doesn’t have the elite quickness to blow past blockers on the interior
-Was often in a rotation for the Buckeyes, bringing the question of whether he can play all three downs
-Lacks ideal length where he can lose getting hands-on first of the blocker
-Lack of length can cause him to get locked onto a blocker without the ability to shed or reach out to affect the runner

-Junior prospect from Pocatello, Idaho
-Consensus 4-star prospect and named Idaho Gatorade Player of the Year his senior season
-Early enrollee to Ohio State, coming in the spring of 2018
-Saw action in 6 games as a true freshman, recording ten total tackles and two TFLs
-Earned more playing time as a sophomore, notching 16 total tackles and another two TFLs
-Earned a starting role as a junior, racking up 23 total tackles, 4.5 TFLs, and three sacks along with a forced fumble

Tommy Togiai from Ohio State may not be a heralded name in this year’s draft class, but don’t let that confuse you for the impact he can have at the next level. Togiai has played behind several big names along the Buckeye defensive line over the past few seasons before getting his turn in the spotlight in 2020. Togiai is a squattier build for the interior defensive line, aiding in his ability to play with leverage on run downs. He doesn’t give ground easily to blockers and can anchor in to withstand blocks that would hope to push him off of his spot. He does a great job with the push/pull in terms of stacking and shedding blockers to make a play against the run. On this play vs Clemson, Togiai takes on the double team from the center and left guard, maintains his leverage and holds his ground, then sheds the block, slipping off into the gap and stuffs #9 Travis Etienne.

Togiai is a high-effort player from snap-to-whistle. He will pursue the ball carrier downfield as well as play chase to the QB on the pass rush. Here against Penn State, Togiai shows a swim move to his left, then back to the right to disengage the blocker and continue to chase the QB scrambling out of the pocket to the sideline, running him out of bounds for no gain.

Here, Togiai lines up as the 0-technique head-up on the center. Off the snap, he engages the center, holding his own at the LOS. He is then picked up by the LG as well, but gets off of the block, shows off his pursuit and closing speed in a short area, and stops the QB for no gain up the middle.

Togiai wins as a pass rusher with his strength by collapsing the pocket. He isn’t going to get confused for a twitchy, dynamic pass rusher, but he can walk guards and centers back into the lap of the QB, getting the sack himself or helping out the edge rusher get the play by forcing the QB out of the pocket. On this play, Togiai shocks the LG with his initial punch off the snap, getting a good push back into the lap of the passer. He then pulls the guard off of his right shoulder and sheds the block, working through the help of the center and finishes the play for the sack.

Another example where Togiai affects the passing game from multiple facets rather than just sacks. On this play, Togiai has a great get off on the snap of the football, firing into the guard add gets a good push of the pocket, resulting in #16 Trevor Lawrence waiting to throw the ball quick. Togiai then shows his awareness to get his hand up in the passing lane and knocks down the ball for the incompletion.

Another example of Togiai affecting the passing game here by pushing the guard straight back into the lap of the QB, collapsing the pocket and forcing the ball to come out quick.

However, from this clip you also see a problem that comes with Togiai as a pass rusher. Sure, he gets a lot of pressures and collapses the pocket, but he does struggle to finish at the passer in terms of recording sacks. He tends to be more disruptive than productive and can stand to utilize his hands more to disengage blocks for a chance to finish the play.

Despite the positives that come from Togiai’s stout frame for the position, his lack of length can be a detriment when it comes to blockers getting hands-on his chest first due to lack of arm length. As you can see here vs Northwestern, Togiai gets picked up by the guard on the QB designed run. The guard gets into Togiai’s chest and gets control of his torso, driving him out of the way while the QB takes off up the middle for the big gain. Togiai’s lack of arm length also limits his ability to reach out and affect the runner coming of his right side, as well as shed the blocker who is latched onto his chest.

Overall, Togiai has excellent character, plays with his hair on fire for a 300lb man, and is a true asset in stopping the run. He may never be a high sack guy on the interior and his lack of length can cause some issues in terms of getting first contact on blockers, but he plays with great leverage and strength, and won’t cede much ground in short yardage situations. Togiai would do best to go to a team needing an early down run stuffer where he can play that role well as he develops more of a pass rush repertoire to go along with his ability to collapse the pocket on his bull rush or his push/pull.

Seeing as the Steelers just lost Tyson Alualu to the Jaguars in free agency, Togiai could easily be on their radar as a mid-round selection from a school they have a strong affiliation with in Ohio State to fill the need of a stout, run-stuffing interior defensive lineman that can line up in multiple fronts. Time will tell if the interest is there, but given Togiai’s traits and Pittsburgh’s need to get younger and more beefed up along the defensive front, Togiai makes a lot of sense.