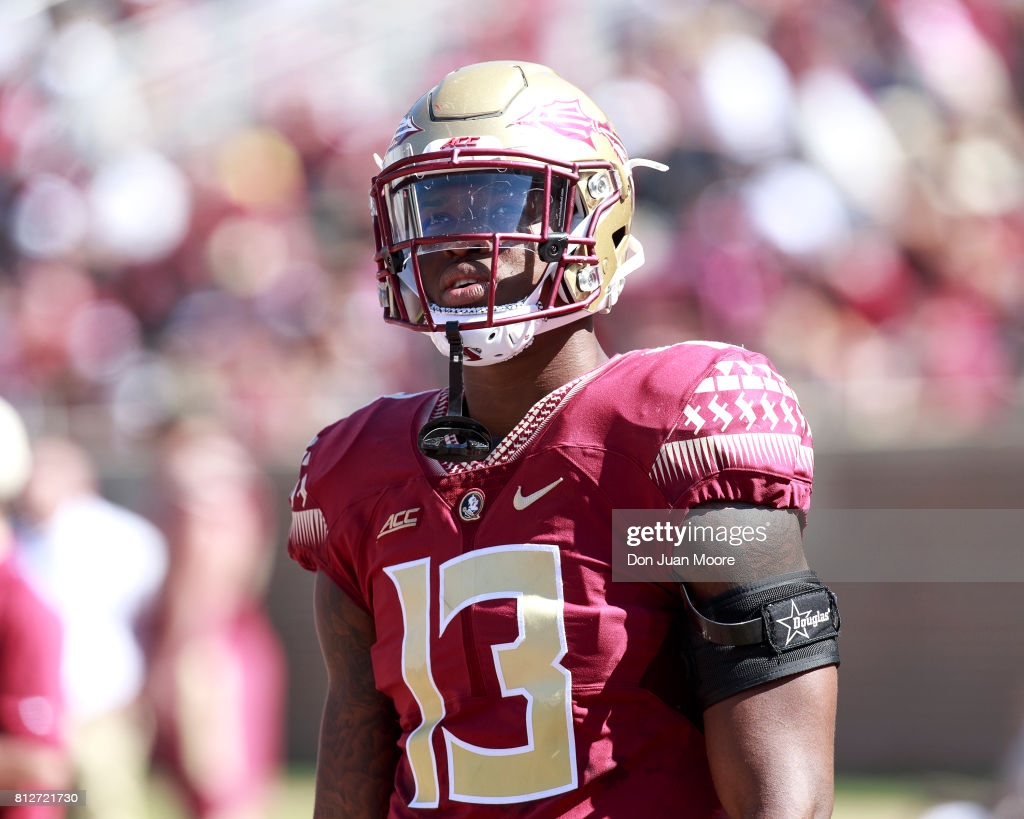 -Needs to learn to use his length to his advantage more consistently
-Slow, methodical mover laterally
-Lacks overall rush plan, slow to work in counters
-Leaves much to be desired as a run defender
-Decent functional strength, but must get stronger at the next level
-Struggles to consistently tackle despite length

-Played in 36 career games at Florida State, starting 10 games for the Seminoles
-Finished career with 59 career tackles, 16.5 tackles for loss, 8.0 sacks, one interception and one fumble recovery
-Former 5-star recruit that chose Florida State over Maryland, Penn State, Alabama, Georgia, and others

Florida State EDGE Joshua Kaindoh certainly looks the part in pads, but his tape left so much to be desired over the last two years.

A former 5-star recruit that had more than 30 Division I offers, chose Florida State after flipping late from Maryland. Expectations were sky-high for the massive edge defender, but the production was just never there for him.

Despite lacking production, Kaindoh flashed some high-level traits during his time in Tallahassee.

With his size, Kaindoh showed the ability to dip underneath smaller offensive tackles during his time in college, which is insane considering his height.

This was a terrific rep against Boise State in 2019 against future second round pick of the Minnesota Vikings, left tackle Ezra Cleveland.

Kaindoh is an easy mover when working upfield. He has fluid hips and overall solid athleticism, and he’s able to bend at his waist without losing speed or power.

Though he doesn’t win around the corner, he flashed the ability to counter back up the field, beat Cleveland again and get in on the sack. He rarely flashed counters on the tape that I watched, so I was pleased to see this type of rep.

With impressive length, you’d think Kaindoh uses it will. On tape, he rarely tapped into it on a consistent basis. When he did, the wins were so obvious and impressive.

Opening up the 2020 season here against Jacksonville State, Kaindoh does a great job penetrating power through his base into his arm, long-arming the tackle in the chest before then swiping across his face to win inside for the sack.

He could really open up his pass rush plan if he leans into his length more.

I am intrigued by Kaindoh’s ability to chew up yardage up the field at the snap. He’s a long strider and has decent ankle flexion to turn the corner. His length comes into play on this rep against Pittsburgh in 2020, allowing him to reach out and knock the ball loose while still engaged with the blocker.

What Kaindoh does bring to the position is some impressive athleticism in space. He moves well overall for a man his size, and turned in this highlight-reel interception return for a touchdown against North Carolina in 2020.

While he never dropped into space at Florida State, he did show the ability to gain ground on swing routes and jumped it for the score.

Overall, I think Kaindoh — at best – is a rotation defensive end at the next level. He doesn’t have much of a pass rush plan and is pretty poor against the run overall. He needs to get strong and learn to lean into his length against the run to stay clean.

He has some impressive tools to work with and could carve out a long career as a No. 3 defensive end in the NFL, but I can’t ever see him carving out a starting job and turning into a serviceable pass rusher at the next level.

Kaindoh feels like a Mid Day 3 guy for a 4-3 system that has depth along the defensive line.