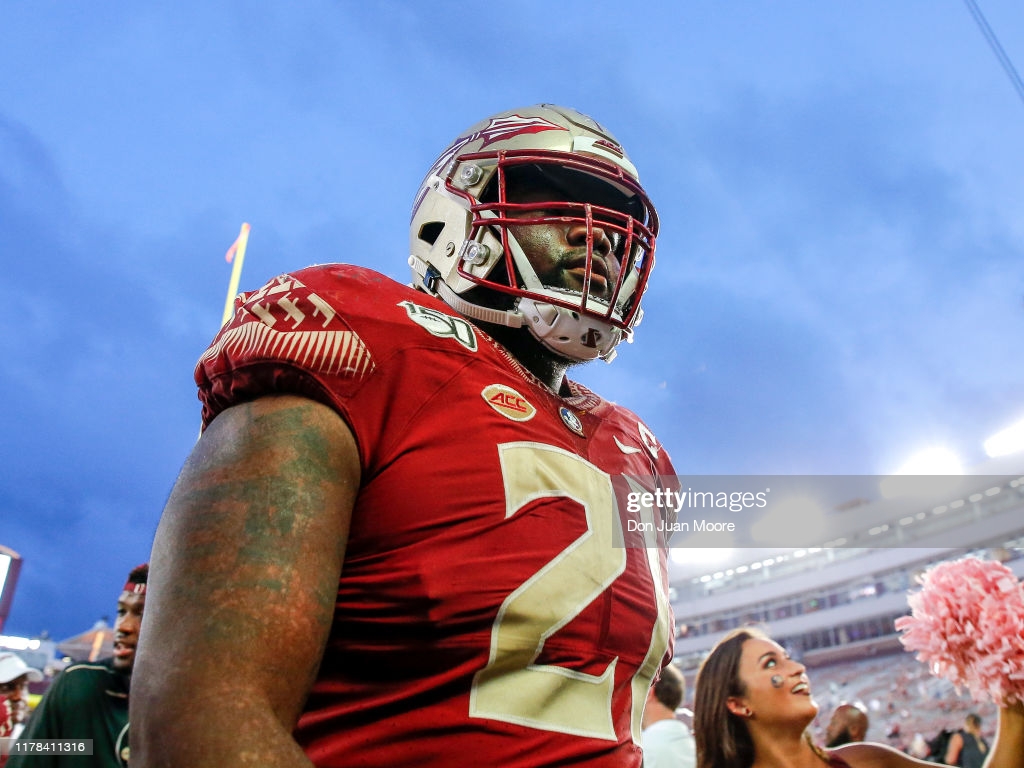 As a 5 star recruit and being ranked the number one defensive tackle in the country coming into college can put some pressure on a player.  Add in playing for 4 different head coaches and it would be understandable if there were some struggles. Marvin Wilson seemingly did what was asked of him playing in different schemes and lining up everywhere from the 0 tech to rushing off the edge.

Against the pass, he has good snap quickness and plays with good pad level. He has solid placement when putting his hands into the chest of the blocker and violent hands when trying to swipe and chop. He has solid up field burst and will use a variety of moves including rips, clubs, swims, bull rushes and has good strength to yank blockers from his path. Once past the blocker he has good acceleration to the QB especially from the inside.  He was solid as the penetrator on stunts and has potential as a looper.

Vs Georgia Tech, a good example of his effort and athleticism on this screen to chase down the ball and make the stop.

Vs Georgia Tech, as the 3T he will club the right guard and accelerate in the backfield. The RB wanted no part of getting in his way.

At Notre Dame, he is the 3T against the left guard and gets decent bull rush to allow him to get a hand in the face of the QB.

Vs North Carolina, these were back to back plays late in the game. The first play he is lined up inside the right guard and will jab in and out with a good club to move the guard and accelerate to get pressure. On the second play, he is over the center and will move to his right as the penetrator on a stunt and will push the left guard giving him a lane to the QB.

Against the run, he has solid snap quickness, solid lateral quickness and reads blocks well. He has good hand placement and pad level to engage blockers and shed them in his gaps. He has very good effort to get through blocks and is solid getting through traffic. His athleticism is evident when chasing after the ball showing impressive speed. His anchor versus double teams showed some improvement and was better when playing inside. He is a strong tackler and takes good angles to the ball and packs a good thump on contact.

At Miami, as the 4I on the left he doesn’t get the tackle but shows some quickness and strength to remove the right tackle and get in the backfield.

At Miami, he’s lined up on the right side and I’m not sure if this very good mental processing or guessing on the motion man but he is immediately chasing to the left and shows his speed and pop as a tackler.

Vs North Carolina, he is the 1T and will take on the left guard and stand him up, clogging the gaps inside. It forces the runner outside and he shows the motor to get after it and get in on the tackle.

His chops and swipe were inconsistent when it came to landing on their intended target, missing too often opening his chest.  He doesn’t get a lot of depth with his initial steps in his pass rush.  He was used often to rush from the outside, attempting to speed rush, but that doesn’t fit his skill set. When looping on stunts he would turn his body to the sideline and get hung up on players instead of sliding and accelerating. When trying to 1 gap he didn’t have the quickness to split gaps and would get pushed laterally out of the play. He needs to stay square to the LOS when taking on blocks to the outside. He is a bit top heavy and it gets him off balance.

Overall, Wilson has very good athleticism, good strength and good mental processing of blocking schemes. He shows potential as an interior pass rusher and has a good motor, pursues with good angles and can stack and shed blockers. He will benefit from improving the effectiveness of chops/swipes, improving technique on outside blocks and staying square to the line of scrimmage.

He was used in a variety of ways that give him some flexibility along the defensive line but it may have also limited his production.  He rushed often from outside the tackle and was used in one gap schemes but those don’t fit his strengths.  Let him play inside at the 0/1/3 tech where he is a more effective pass rusher and put him in a two gap scheme to stack and shed blocks to make plays in his gaps and I think you’ll have and effective defensive tackle.