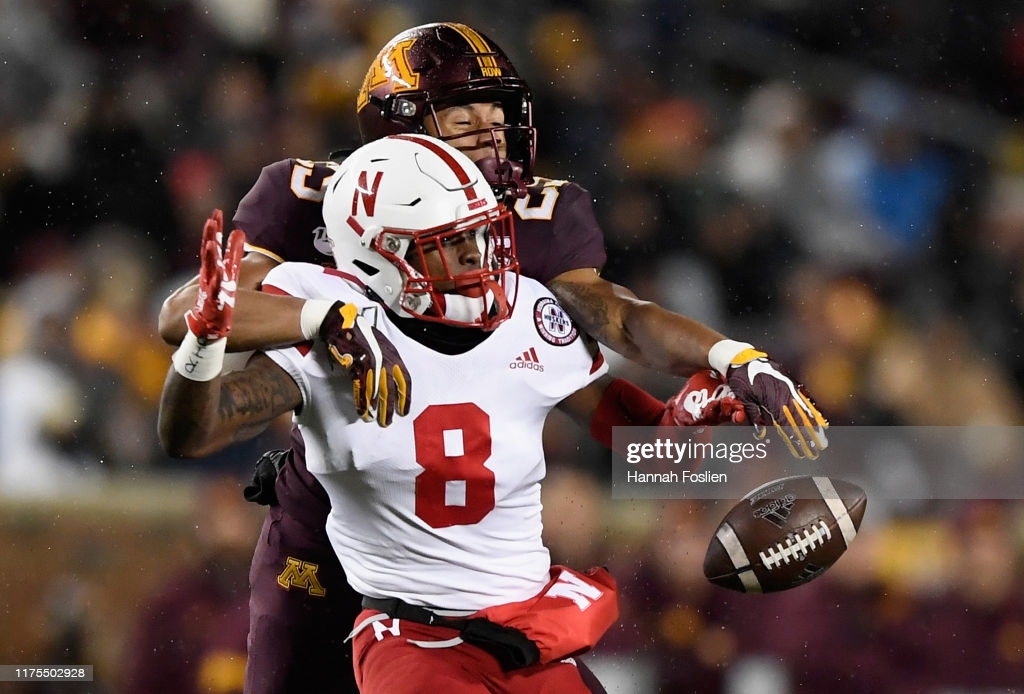 Throughout the 2021 draft season, I have primarily looked toward profiling versatile slot options who could help replace the potential loss of Mike Hilton.  Today, we dive into a player who brings an intriguing combination of size, speed, and physicality to the boundary position, Minnesota’s Benjamin St-Juste.  Although entering the draft with just one full year of starter level production due to a Covid shortened 2020 Big-Ten season, St-Juste’s 6’3” frame, along with an 80” wingspan and 32” arms make him an intriguing mid round prospects for single high centric schemes, including Keith Butler’s defense.

Possessing above average click and close ability out of his breaks, St-Juste is consistently able to close to contest underneath routes.  While his lengthy frame allows him to disrupt receivers at the catch point, it is St-Juste’s physicality in coverage which makes life difficult for pass catchers.  In a 2019 matchup against the Iowa Hawkeyes, St-Juste, deployed in a Cover 3 scheme, displays great patience while utilizing a shuffle technique to eye the quarterback, before closing rapidly on the in breaking route and arriving to play the pocket with physicality, securing an impressive pass breakup in the process.

While at his best in zone coverage assignments, St-Juste length and physicality allow him to provide sticky man coverage reps in the red zone.  In a 2019 Outback Bowl matchup against the Auburn Tigers, he displayed great patience off the line with a smooth mirror press before getting to the receivers hip, staying chest to chest against the fade route, turning into the receiver, and playing through the pocket with a physical left hand chop to secure another pass breakup.  On the next rep, from a 2020 matchup against Michigan, he opts for a more aggressive two hand jam off the line, allowing separation toward the front corner of the end zone, yet remaining calm while out of phase and once again playing the pocket with both hands to secure the pass breakup on a smooth recovery.

Although it is rare for larger framed cornerbacks to excel while tackling in the open field, Benjamin St-Juste projects as an elite tackler at the NFL level.  In the first clip from 2019, the Iowa offense attempts to isolate him with a now screen.  At the snap, St-Juste takes a read step before immediately diagnosing screen, flying downfield with a smooth T-step break, and arriving at the catch point with physicality, wrapping the receiver up for a fundamentally sound tackle, allowing no yards after the catch and forcing a third and long attempt.  Earlier in the same drive, deployed in man coverage, he follows his man across the formation in motion before navigating through traffic back across the field, closing to the flat effortlessly, and securing a hawk roll tackle behind the line of scrimmage for an impressive tackle for a loss.

While open field tackling is a fundamentally necessary skill for all cornerbacks, few possess the physicality and block shedding ability to factor into run defense within the box.  In a 2019 matchup against Illinois, St-Juste, aligned on the line of scrimmage to a tight formation, steps up at the snap to establish contain responsibilities before smoothly shedding the pulling guard and shooting low to force the back out of bounds well behind the line of scrimmage.

While St-Juste’s physicality certainly makes him an asset in the run game, over aggression and lack of proper eye discipline can occasionally open cutback lanes for ball carriers.  In a 2020 matchup against Michigan, he follows motion into an overhang position to the tight set, immediately coming downhill to fill outside contain, simultaneously taking himself out of position to meet the runner as he explodes into the second level, and displaying a lack of elite long speed to hawk the back, who rumbles 70 yards untouched for the score.  Later in the blowout loss, St-Juste, aligned in off coverage, flies downfield upon diagnosing the bubble screen, ultimately compromising outside leverage, getting sealed off to the inside, and opening a lane to the outside for an explosive catch and run down the sideline.

Overall, Benjamin St-Juste enters the 2021 NFL draft as an intriguing mid round prospect possessing a rare skill set for his size, along with scheme limitations that will dictate his status on draft boards across the league.  Ideally, St-Juste fits best in a single high centric scheme with heavy emphasis on Cover 3 and Cover 1 sets, much like what we see in Pittsburgh and San Francisco, although a Cover 2 centric scheme could certainly unlock his potential as well.

St-Juste’s length, physicality, and movement skills certainly make him an interesting mid round target for Pittsburgh, where he could contribute as a special teamer as a rookie before competing for a starting job on the boundary in 2022.  While he may never become a bonafide number one corner due to lack of elite hip fluidity, his lengthy frame and physicality could make him particularly effective in deep 1/3 zone assignments along with man coverage assignments from within the red zone.  In an ideal scenario, St-Juste projects similarly to Akello Witherspoon, although he offers far more physicality both as a run defender and in coverage.  While many Steelers fans may remain frightened by the Artie Burns experiment, St-Juste provides far more mobility and physicality than the overwhelming majority of lanky cornerback prospects of the past.

Although his late development as a collegiate cornerback, with two unproductive years at Michigan before a third year transfer, may concern some scouts, I would argue that St-Juste is a great example of a player who developed an NFL ready skill set throughout his extensive college career.  While it’s tough to project his exact draft stock at the moment, St-Juste will certainly be an intriguing mid round prospect on the Steelers board, as cornerback is an underrated, yet vastly important, need heading into the draft.