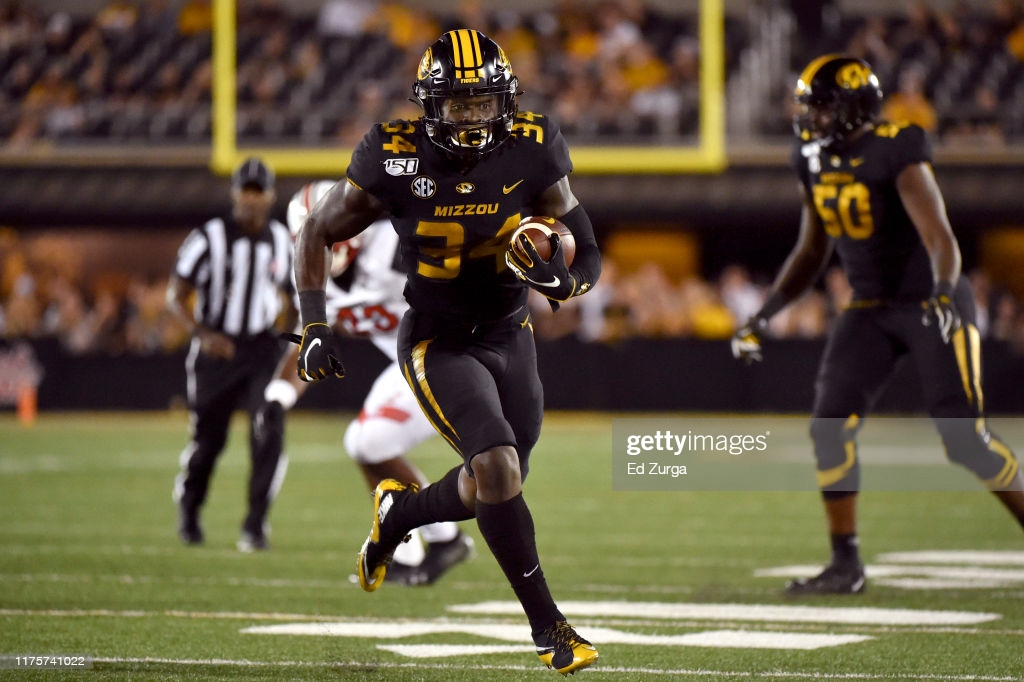 -Well-proportioned frame that allows him to run powerfully behind his pads
-Good overall contact balance to handle first contact on runs
-Has surprising initial burst with the ball in his hands
-Willing pass blocker that mixes it up consistently
-Disciplined, patient runner that takes what he can get; consistently falls forward
-Has shown he can handle a heavy workload overall

-One-speed runner; not overly dynamic in space
-Heavy feet overall and labors to change directions or shake defenders
-Lateral agility and burst to turn the corner on defensive fronts simply isn’t there
-Ball security is a major issue; doesn’t have high fumble numbers but ball is often loose
-Won’t offer you much in the passing game aside from swings and screens
-Long speed not part of his game; won’t slash gaps or outrun angles, limiting splash plays

-Played in 48 career games at Missouri over four years
-Finished four-year career with 3,720 rushing yards and 40 touchdowns on 746 rushing attempts
-Added 47 receptions for 289 yards in his career with the Tigers
-Rushed for a career-high 1,216 yards as a sophomore in 2018
-Marked lone season he cracked 1,000 rushing yards for the Tigers
-Became Missouri’s All-Time Non-QB rushing leader during his senior season
-Chose Mizzou over offers from Boston College, Appalachian State, James Madison and Miami (OH) among others
-Competed in the 2021 Reese’s Senior Bowl in Mobile

Though his career numbers look very good overall, Rountree’s tape leads a lot to be desired in today’s day and age. He looks like a throwback running back that runs with power and consistently falls forward at the end of runs, but lacks wiggle, speed, and overall burst to thrive in today’s wide-open offenses.

One cannot question his durability whatsoever, but Rountree feels more like a No. 2-3 running back in the NFL that can handle change-of-pace reps and plays a ton of special teams.

I do like Rountree’s contact balance and overall leg drive as a running back. He does a great job here against Mississippi State in 2020, slipping through the lane, maintaining balance as he gets his right leg taken out of from underneath him, causing him to spin, and then finds the end zone at the end of the run.

Runs like these leads me to believe Rountree could really carve out a role in a short-yardage/red zone situation at the next level.

He’s patient as a runner, lets his blocks develop, and takes what’s there.

Here against Florida in 2018, Rountree is patient following his lead blocker before bursting into the open field to just slip past the Florida safety to find the end zone. He looks much slimmer and faster as a sophomore, compared to what he looked like as a senior. Maybe he’s a candidate to slim down at the next level in his next stop now that he doesn’t have a significant workload to carry.

Here in 2019 against West Virginia, Rountree again looks like he’s gliding over the turf. He’s able to shift his weight easily to avoid a pair of tacklers and has some decent burst in a short area to turn the corner down the field.

But then you see runs like this in 2019 against Purdue. He should be able to really open it up in the open field, but he feels clunky overall. Watch his feet as he tries to enter into a move in space.

I’m not sure why he’s leaping into the line of scrimmage here against Kentucky in 2020, but he has decent vision to pick his way through the defense laterally despite not having the necessary agility to turn the corner and run away.

That said, 2019 against Georgia, he takes a swing pass and shows off serious burst to chew up yards and turn the corner, slipping around the defensive back for the big gain.

He has the overall production, held up well with the heavy workload and played a significant role in wearing down defensive fronts for Missouri the last four years. However, he looks like just a guy at the next level, one who can come in and spell twitchier backs.

He’ll carve out a career and should be a strong pass protecting running back, but he feels like a core special teamer, almost like a Cedric Peerman type.