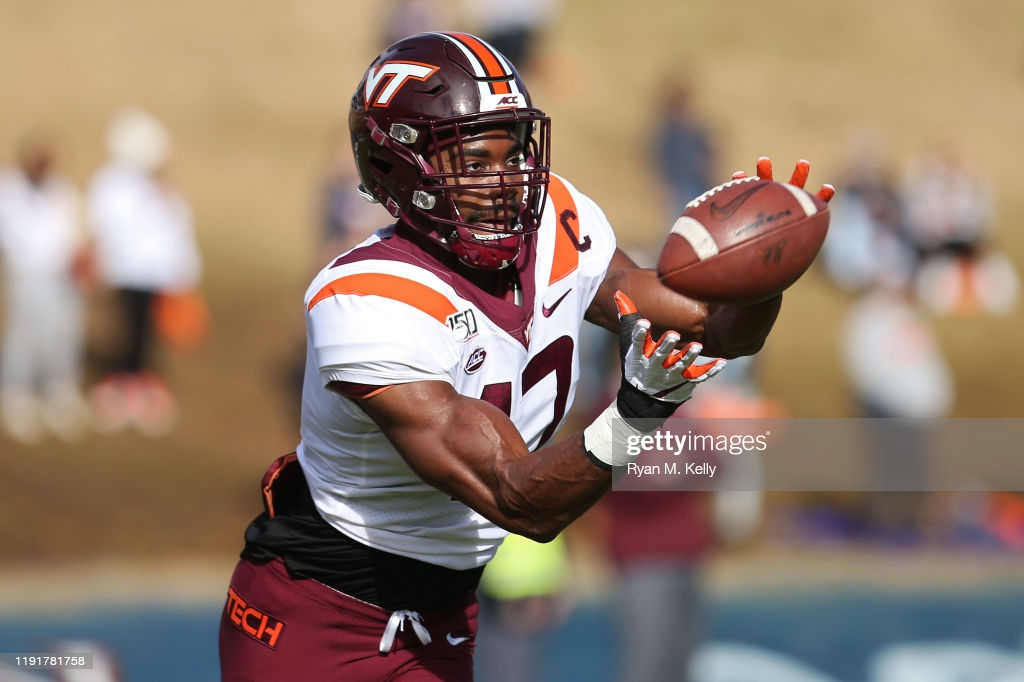 -Comfortable playing down around the line of scrimmage and brings physicality to the position with his size and strength
-Very good understanding overall run fits as a box defender and utilizes leverage well
-Imposing presence overall; definitely the first one off the bus
-At his most comfortable in coverage when he’s allowed to freelance and play off of feel
-Shows flashes of impressive coverage abilities in the slot or in two deep
-Processes rather quickly and finds himself in on a lot of plays
-Plays under control and rarely is caught off balance

-Severely limited athlete overall
-Labors to get up to speed in space; change of directions are slow and elongated
-Won’t consistently anticipate routes despite being a former receiver
-Needs to learn to impose his will more as a box defender; needs to tap into that size and strength on a consistent basis and send a message physically
-Looks relatively stiff overall in space
-On the older side in the class; turns 23 before start of season

If there was an award in this draft class for scariest looking defender who happens to be the first man off the bus every week, Virginia Tech safety Divine Deablo would probably be in the running for it.

A massive, rocked up human at 6’3”, 226 pounds, Deablo looks like a linebacker who happens to play safety. He towers over teammates in the secondary and really took a step forward in 2020, in terms of ball production and his overall ability to make plays all over the field.

While his stat line looks very impressive coming out of a pro-style defensive scheme, Deablo leaves much to be desired from a physicality and athleticism standpoint, which will undoubtedly drop him down draft boards as he appears locked into a box safety role in the NFL.

He does have some strong tape coming out of Virginia Tech though.

Though he does struggle to get moving in a hurry in space, I saw some impressive closing speed here from the hulking Virginia Tech safety on the road against Pittsburgh in 2020.

You can see him take a false step initially when he reads the bubble screen, but he’s a long strider and has some impressive explosion to his game. He needs to be better at completely finishing the play initially, but I loved the fight here and the ability to pop the football out despite missing the initial tackle.

As a box defender, Deablo is very comfortable playing the run. He’s disciplined, processes quickly and flows well to make this stick and stop against Wake Forest.

He never panics with the trash in front of him and calmly flows to his right before sticking his foot in the turf and firing downhill to make the play.

Though he has issues overall in coverage, I saw real flashes of a guy who can succeed with proper usage. He’s at his most comfortable when he’s allowed to freelance and read the quarterback’s eyes.

This interception of Trevor Lawrence in the end zone was one of the best interceptions I saw all season from any defensive back in the country.

He makes a whale of a play ranging from the far hash to jump this route and pick off the future No. 1 pick.

Same thing here against NC State; he never takes his eyes off of the quarterback and jumps the slow-developing out route for the pick.

He’s stiff in man coverage and doesn’t have the overall change of direction skills to stick in man, but place him in soft zone and let him read the eyes of the quarterback and you could have a productive safety on your hands.

As I’ve said before, he’s a limited athlete, especially for the safety position.

He flashes plays like this though in coverage. He flips his hips late here on the post route, but he has the long speed to run underneath this route and break it up at the last second.

Overall, I think Deablo is best suited as a hybrid-like defender in the NFL. He can handle himself in the box in obvious run downs, and should be capable of being passable in passing situations against running backs and tight ends.

Even if he doesn’t develop into a starter, he will contribute at times on defense and will become a building block on special teams in all three phases.