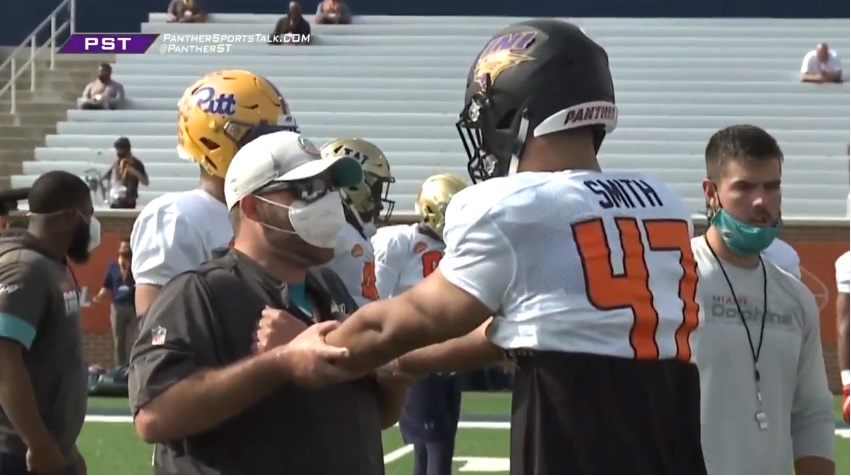 Elerson Smith was another player who opted out of the 2020 season when the season was moved to the spring but he put up impressive numbers in Northern Iowa’s 2019 FCS playoff run.  He was the right defensive end and played in 2, 3 and 4 point stances from the 4i tech to the 7 tech.

As a pass rusher, he shows good burst off the line of scrimmage and is able to get good depth with his long strides.  He uses his length well, plays with good leverage and active hands to chop and swipe to keep the blocker off of him. He shows some variety in his pass rush including rip, spin, swim, a push/pull and jump cut to the inside. He is solid converting speed to power and uses hand placement and leverage to drive the lineman back in the pocket. He was solid as the penetrator on stunts and show good agility and solid acceleration coming off the hip of his teammate as the looper. He uses his length well to get his hands up in passing lanes to deflect passes. Most of his pass rushes were from a 3 point stance but occasionally from a 2 points stance. He had solid awareness on screens and he has some experience dropping into the curl/flat zones.

Vs Idaho State Elerson (16) uses a double chop with a club to the inside to get the left tackle off balance and get the sack.

At North Dakota State, he uses a hesitation with a chop to get around the outside of the tackle to provide quick pressure.

Vs San Diego, he uses leverage and leg drive to push the left tackle back to the quarterback.

Against the run, he has solid awareness of blocking schemes and displays good effort to control his block and is willing to take on pullers. He has snap quickness to be effective shooting gaps. He uses solid hand placement, lateral agility and good leverage to slide with the blocker and has shown the ability to yank the blocker out of the way. He has a solid slide and agility when unblocked on the backside.

At North Dakota State he will knife inside and swim over the left guard to make a tackle in the backfield.

At South Dakota State he will use his hands first to punch and then hold off the left tackle while staying square and forcing the runner toward the sideline before making a tackle.

At James Madison he will slide from the backside and make the play on the runner.

He has marginal ankle flexion and bend around the corner.  He would often end up past the quarterback or slip down when trying to corner.  His play strength is adequate and can get twisted and steered when pass rushing. He must improve removing blockers hands so they can’t lock on to him. When setting the edge he allowed too many runners to get outside. Marginal timing getting off of blocks and too often seems concentrated on being engaged in the block and not on the where the ball is. Needs to add play strength on to his frame and has adequate physicality as a tackler. Adequate acceleration when chasing from the backside and pursuit overall is lacking aggressiveness.

Vs North Dakota State, he’ll circle back to pursue the runner but he’s not aggressive, kind of hopping along behind him, and then the runner gets 6-7 after contact. You really want to see more physicality from your edge players.

At South Dakota State, when he tries to flatten to the QB he catches an edge and his foot slides out. Saw this several times. Either he ends up on the ground or past the QB due to a lack of ankle flexion.

Overall, Smith is a long, lean defender who often played out of position on the defensive line.  In the NFL he’ll be a full time Edge in 3-4 defense that would best fit in 1 gap scheme that can use his snap quickness, leverage and active hands to rush the passer while working to set the edge and attack from the backside.  He’ll struggle to bend around the edge, needs to add play strength, up his aggressiveness and improve his technique as a run defender.

The Steelers don’t have any depth behind their starters on the Edge.  The will need to address the position in the draft. Smith played primarily on the right side but did show he can play on the left at the Senior Bowl. At worst he can be a backup for the next few years that can provide a pass rush and be a special team performer.