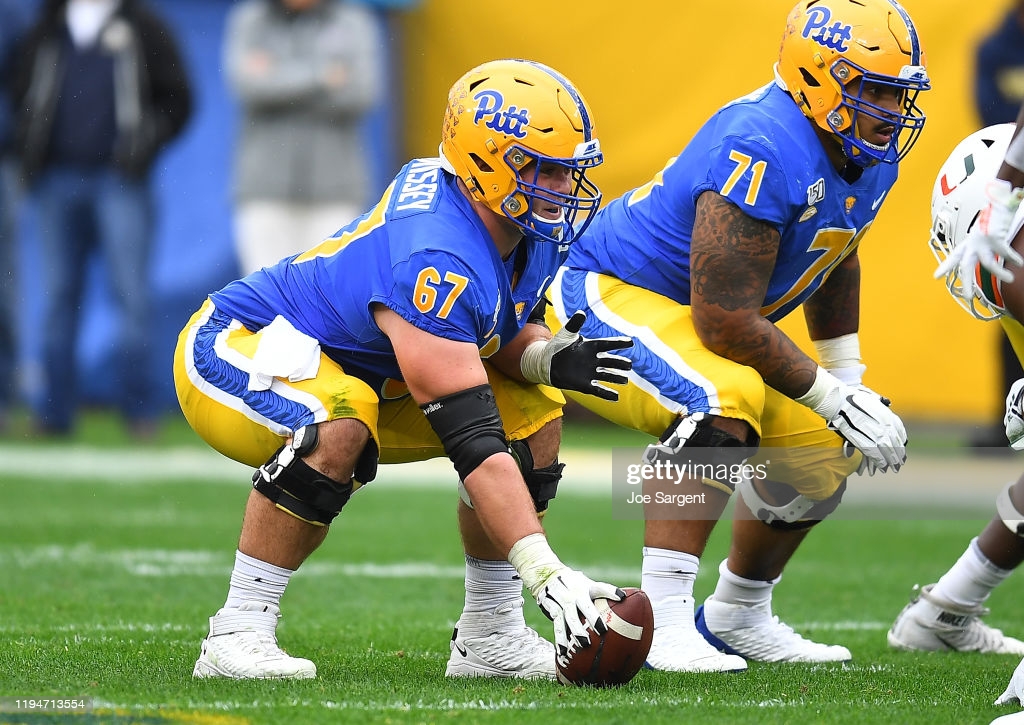 – Functional play strength, especially in pass pro
– Plays with sound base and strong anchor, sits in pass set with good hip bend
– Great grip strength when he plays with tight hands, able to shut down power rushes against bigger DTs
– Shows strength and toughness in run game when uncovered, runs feet and works hard to create a push on combo/down blocks
– Active eyes and looks for work when uncovered in pass pro
– Shows some snap and burst out of stance, serviceable puller who was asked to function in space
– Consistent snaps and didn’t make QB fight the ball
– Steady player who doesn’t get too high or too low, consistent game, stays on feet and rarely ends up on the ground
– Elite starting experience
– Tiny bit of versatility
– Regarded as leader and team captain

– Average size with likely below average length
– Catches too often as a blocker, lack of arm length makes it hard for him to create space between him and defender
– Not often able to get into chest of opponent first, causes him to miss with his hands and have to work to re-punch
– Can get overpowered in run game by head up/shaded nose tackles
– Struggles with speed rushers/rushes in pass game, lacks enough foot speed to slide laterally
– Inconsistent at second level, able to stick and drive when he makes contact but misses too often and has trouble changing directions
– Not an asset out in space on screens, struggles to hit target
– Maxed out, looks to have limited upside or room to grow

– 47 career starts for the Panthers (46 at center, one at RG)
– Allowed just two sacks in last two seasons (both came in 2020, none given up in 2019)
– Two-time team captain
– Won Burlsworth Trophy in 2020, given to top player who was a walk-on
– Zero star recruit out of HS, had three offers (Bucknell, Leigh, Colgate) but chose to walk-on at Pitt
– Redshirted in 2016, won job in 2017 and earned a scholarship
– Joined Senior Bowl roster on last minute notice after not being initially invited, played center and both guard spots in the game

Morrissey is a Pitt product at a position the Steelers’ need so he’s certainly worth being on our radar. He’s your classic, throwback center who could’ve played in any era. A Mike Webster type in the sense (not the talent, obviously) of being undersized, scrappy, and just a tough dude you want on your team. Morrissey is a good run blocker when he’s not facing a head-up nose tackle and he works hard to drive his feet and create movement. Like here on this Virginia Tech LB.

He might be even better in pass protection against power defensive tackles. Rarely lost those battles outright thanks to his strength and sound base, making up for his lack of length that often has him catching blocks.

But he’s a limited athlete who was asked to pull but isn’t best in space. When he hits his target at the second level, he drives and sticks but too often he misses and can’t change direction when the back slightly alters his path.

Here, he can’t get out in space on this screen in time against Penn State.

And he’s susceptible to getting beat by speed/finesse rushes to his edge. He simply isn’t quick enough to mirror and seal the edge. He’ll handle bigger 1 techs well. But against smaller, quicker DTs, he’s going to struggle and need help from the guard to cut down the space he has to cover.

At best, he’s a Ben Jones/Nick Martin tape in the NFL. But that even feels too strong for me. I’ll compare him to someone who was a little smaller but a similar play style. Michigan’s David Molk, a 7th round pick of the Chargers in 2012 and had a brief career with the Eagles. Morrissey is a good guy, easy to root for, and you can bet he’ll work hard in the NFL to maximize his chances. But his upside is limited.