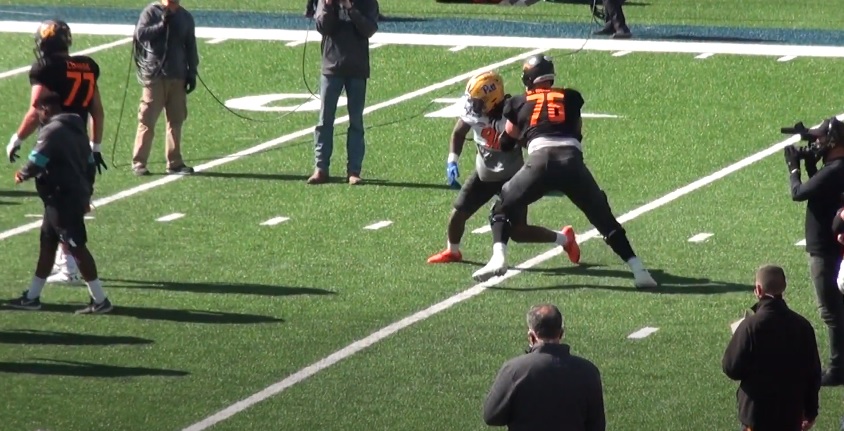 -Freak size and length for the position with the long wing span to boot (82 3/8, 34’ arm)
-Long, angular frame with good muscle build and has room to add more
-Very good athlete for his size in terms of speed and explosiveness
-Easy mover in space in the run game, being able to combo off to the backer or climb to the 2nd level and pick off smaller defenders as a lead blocker
-Plays with a good motor and will look to take his block through the whistle
-Plays with a nasty demeanor you want to see from an offensive lineman, priding himself on takedown/pancake blocks
-Enjoys enforcing his will on defenders he knows are not as strong as him in the run game
-Has an extremely strong upper body with the ability to uproot and drive defenders back with relative ease
-Washes defenders away in the run game when down blocking, clearing a massive hole to run through
-Has the athleticism to get out on screens and counter/pulls and lead the way for the back
-Has the ability to pick up defenders in space with his length/athleticism combo
-Able to hit and replace with his hands in pass protection with good hand placement inside the defender’s chest
-Plays with active hands off the snap in pass protection ready to punch on the pass rush
-Plays with a strong, wide base in pass protection

-Has a thin lower half in comparison to the rest of body and could stand to add more functional mass to anchor down vs premier power rushers at the next level
-Can have leverage issues vs compact edge defenders who can get low to the ground and turn the corner on him in his pass set
-Relies more on his quick set to get hand-on early with a defender than a traditional kick step to utilize his length and athleticism
-His kick step in pass protection can be a little slow at times, leading to speed edge rushers being able to get around his outside shoulder
-Susceptible to inside rushers and defenders crossing his face on stunts
-Can struggle with consistency from time to time in terms of being sound on his run fits and tending to overrun a play
-Would like to see his upper body strength translate more to stonewalling defenders on his pass sets

-Redshirt Senior prospect from Lenox, IA
-Multi-sport athlete in high school, lettering in both basketball and baseball, earning first-team all-conference honors
-Was a TE/DE two-way in high school in 8-man before being moved to the offensive line in college
-Redshirted his 1st season on campus and started 5 games at RT before suffering a season-ending injury the year after
-Started all but 1 game as a sophomore at RT, solidifying his spot on the offensive line
-Remained a mainstay at RT as a junior, but lost out on his senior season due to UNI not having a fall season
-Decided to declare for the draft rather than attempting to play a spring season

Spencer Brown is not the typical name you often hear when talking about the top tackle prospects in this year’s draft class. However, when you pop in the tape, the UNI standout shows flashes of dominance at the FCS level. Brown may be from a smaller school, but the man is a monster in terms of measurables, looking like a beefed-up power forward with his tall, long frame with the long arms scouts treasure in tackle prospects. Brown transitioned from being a receiver and edge rusher in 8-man football high school, redshirting his 1st season on campus to add size and strength to his frame.  One can see his athleticism at his size stand out in his play. Brown is an easy mover in space and can be dominate in the run game up front on the LOS or when asked to pull or get out in front on screens. Here is a play where he pulls from the right side, comes up the middle and picks up the linebacker filling the gap, get his outside shoulder and finish him to the floor to spring his back.

He can be devastating at the point of attack, possessing the nasty demeanor and upper body strength to bury defenders into the turf when given the opportunity. Here is an example from his junior year against NDSU where he picks up the defensive end coming inside, walls him down clearing the outside running lane for the back, and takes the defender to the turf while also picking off the offside linebacker in the process.

Brown is a man in the weight room, having claimed multiple team records at the UNI program for his feats of strength, most notably posting a 500lb bench press, something difficult to accomplish given his arm length. He strength in his upper body and hands show up he where he gets a strong punch in his target zone, then gets his arm on the defender’s inside shoulder, and them uproots him to the floor.

Brown has great traits in pass protection too, playing with active hands and a good base in pass protection. He utilizes a quick set to get hands-on early in the rep vs pass rushers. Here is this rep vs Iowa, He mirrors the pass rusher off the edge, swatting his hands down and gets his midsection to throw him off balance to neutralize the rush.

On this play at the Senior Bowl, he gets off the ball quickly in his quickset, stays in front of pass rusher Patrick Jones, and gets his hands on his target, swipes off the defender’s outside arm trying to get free, and stays in front with good pad level to win the rep.

Brown has a bunch of great traits for the position, but he can struggle with lateral foot quickness to handle twists and stunts. For example, Jonathan Cooper of Ohio State is able to cross his face here on this rep as Brown too easily gives up the inside pressure on this 1-on-1 rep.

He also can struggle with leverage against compact edge defenders that rush with power to get underneath him and turn the corner. Having a longer frame and a thin lower half, Brown can struggle to with getting too high at times and will need to be more mindful of having good pad level in his run fits and in pass protection.

Overall, Brown may have played for an FCS school and needs to add more functional mass to his lower half to hold up better against power rushers, but he is an ideal prospect in terms of athletic measurables, motor, and attitude as a locker room guy with a commitment to getting better. Being from the state of Iowa and a similar age as Brown, I know several people who played him as a high school athlete and worked with him at UNI, acknowledging his character in the way he carried himself both on and off the field. Sure, he matched up against lower level competition, but he also played well in his games against Iowa and top-end FCS schools. He has abilities and qualities you can’t teach and is relatively new to the position having only played tackle at the collegiate level for 3 seasons, implying he has still a lot of room to grow.

Should the Steelers look to go running back or center early in the draft, Brown would be a great swing/developmental tackle to add if the team wants to adopt a physical presence in the run game, while having the tools to become a viable pass protector. His size and newness to the position are reminiscent to Alejandro Villanueva, as he was a receiver coming out of Army. However, Villanueva is clearly better in pass protection than Brown, and I would argue Brown brings more as a run blocker. I look to Brian O’Neill as a traits/size/scheme comparison, as O’Neill came in lacking ideal weight and lower body strength, needing time to grow physically and mentally before becoming a mainstay on the Vikings offensive line. Should Brown be placed in a good offensive line room and have a coach willing help him take the next step and capitalize on his physical traits, I can see him becoming a quality starting tackle in the league with the upside he has.