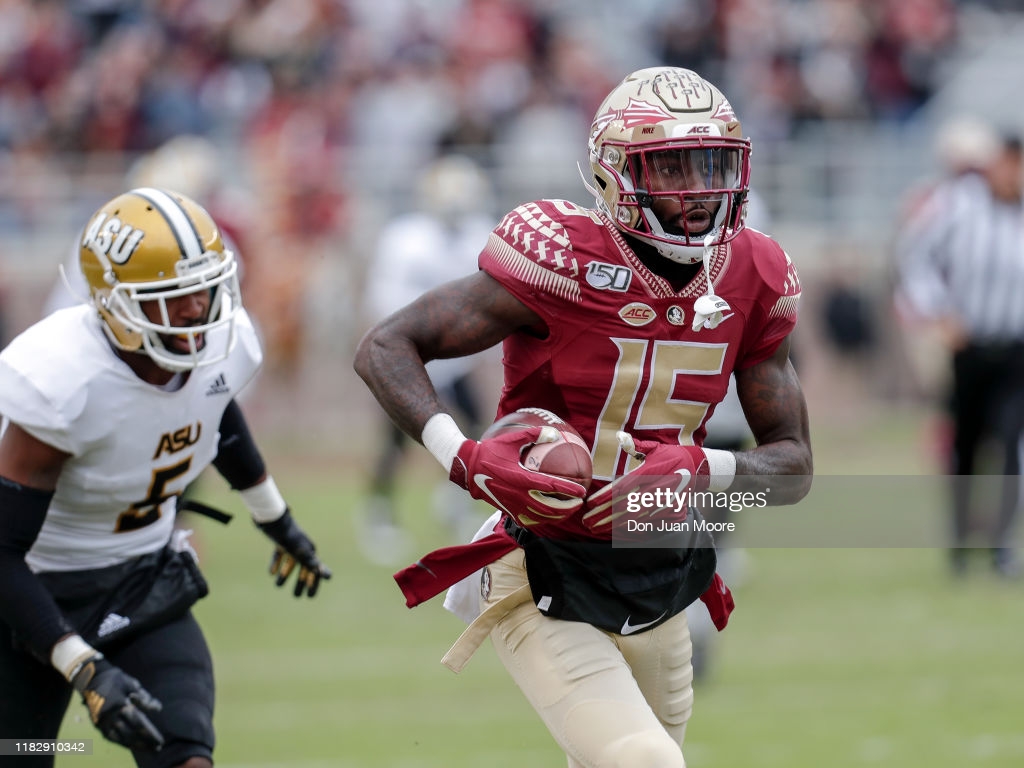 -Ideal size and length with impressive catch radius
-Big-play specialist; has a knack for splash
-Creates separation at the top of his routes consistently; finds another gear
-Able to play through contact and is willing to work across the middle of the field
-Powerful, vice-grip hands to land onto football in the air and wrestle away from defenders
-Smooth operator; YAC monster; good balance, burst, and vision with the ball in space

-Labors to slow down in routes; won’t snap to a stop to break off routes
-Ran a simple route tree at Florida State with a ton of go’s, screens, drags, and stops
-Production was rather poor in 2020, largely due to QB issues
-Struggled with concentration drops throughout career
-Tends to round off routes, allowing corners back into plays
-Could add some muscle to long, lanky frame
-Left program in early Nov. 2020 to prepare for draft

-Played in 30 career games, starting 28 games for the Seminoles
-Finished three-year career with 118 receptions for 2,221 yards and 18 touchdowns
-Career yards total ranks 10th in program history
-Holds FSU record with five 70+-yard receiving touchdowns
-Nine 50+ yard touchdowns tied for second-highest total in ACC over last 15 years
-Had multiple run-ins with the coaching staff, one after publicly calling them out for a lack of transparency over coronavirus testing in August
-Had minor knee surgery in mid-October before leaving program

Florida State wide receiver Tamorrion Terry might regret not having declared for the 2020 NFL Draft after a terrific junior season.

Instead of declaring, Terry returned to school in hopes of improving his stock as a senior with the Seminoles. Instead, he may have hurt his stock with a poor season that featured a number of quarterback issues, minor knee surgery and a falling out with the coaching staff in Tallahassee, leading to an early November departure from the program.

Despite the tough senior season, Terry has some strong tape overall, but he’ll likely find himself waiting until Day 3 to hear his name called due to the knee issue and the overall lack of production in 2020.

Whichever team calls his name though has a real shot at landing a big-play weapon with size, speed, and serious abilities in the open field with the football in his hands.

When not taking the top off of defenses, Terry is a YAC monster who has absolute wheels.

He moves so well in space and can find top gear quickly, allowing him to take short throws and turn them into serious splash plays.

This play against Clemson in 2019 was pretty impressive. He slams on the breaks on the slant route, turns back to the outside and runs away from the two Clemson defensive backs for the touchdown. This was a blowout of a game, but Terry kept competing. I love to see that from guys, especially wide receivers.

Against NC State in 2019, Terry turned in a similar play to the one against Clemson.

He takes this skinny post to the house, destroying angles with his impressive speed that is largely created due to his long strides. He’s a blur in the open field, especially when he finds that top gear.

Here early in 2020 against Georgia Tech, Terry takes this quick screen and makes the cornerback whiff in a bad way, allowing Terry to turn the corner and pick up the first down on a play in which he should have been stopped near the line of scrimmage.

Similar play here to open the 2019 season against Boise State.

Terry can take short throws and really open things up with his throttle. He’s patient and has good vision with the football. Once he sees a lane he hits top speed in a hurry and can run away from defenders.

Short throws to Terry can turn into big plays in a hurry. He’s slippery in the open field for a guy that looks long and lanky on tape.

He has a good feel for where defenders are and has a nose for the open field.

While he did run a simple route tree at Florida State, he flashed the ability to change his pace and rock defenders to sleep with double moves, much like this one here against Notre Dame in 2020.

He sells the slant well, but then shows off the quick twitch and the long speed to get vertical and create separation at the top of the route for the score.

Though he looks skinny overall, Terry is pretty darn strong for his body type. He plays through contact well and has absolute vice grips for hands. Look at the way he snatches this football out of the air and hangs on with former Steelers cornerback Trajan Bandy trying to pry the football away.

Plus, he knows how to play backyard ball a bit. He knows to turn it upfield and flip his head around to try and get in sync with his quarterback. That will bode well in the NFL.

Overall, I think Terry is the classic Day 3 wide receiver that flies under the radar and ends up producing in a big way in the NFL. He feels like the classic X receiver that can take the top off or really hurt defenses underneath after the catch.

I would like to see him add more muscle to his frame, and he’ll need to really develop a dependable route tree, but he knows how to win down the field and has good vision and wiggle after the catch to develop into a complimentary piece in the right system.