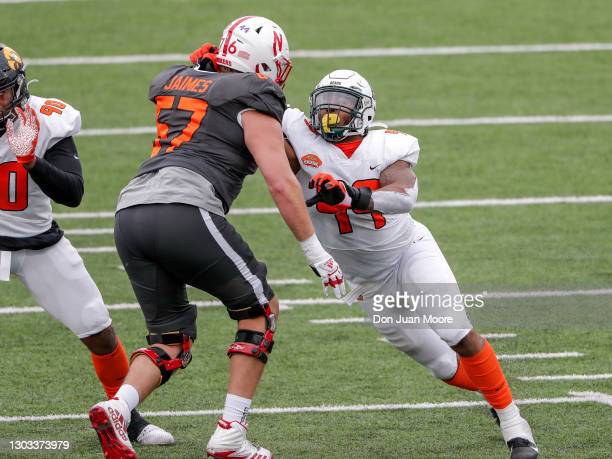 After three seasons and a degree from Arkansas State William Bradley-King entered the transfer portal. The grad transfer earned attention from several teams but thought he was a fit for the “Jack” edge rushing position used by new Baylor coach Dave Aranda which is a hybrid defensive end/outside linebacker position. He lined up from the 4i technique inside the tackle out to the edge, lined up on both sides of the line and played in a 2 and 3 point stance.

As a pass rusher he has solid quickness at the snap and uses long strides to get good depth within his first few steps. His hands are heavy and have a lot of pop. He uses violent chops and swipes to clear the hands to get to the corner at the top of the arc. He has a relentless motor when getting after the quarterback. He will use a rip, club and occasional ghost rush on the outside. He has a solid stutter and jump to the inside to win when linemen overset to the outside.

When power rushing he has good hand placement when using a speed to bull rush or a stab move to the chest of the blocker. He has very good play strength and plays much bigger than his size. He uses leverage, leg drive and tenacity to push blockers into the pocket. He has good aggressiveness at the penetrator on stunts and has some experience dropping into Zone coverage in the short areas.

At West Virginia, Bradley-King (99) is facing off with the left tackle use uses good hand placement with this stab move to get into the chest and drive back the blocker.

At Texas, he is on the right edge and will shift inside the left tackle. He uses a hesitation and his heavy hands to get the tackle off balance and opens a lane to the inside and uses his motor to chase down the QB.

At Oklahoma, this a good look at him covering speed to power against the right tackle shoving him back into the pocket and keep the motor running chasing the QB to the sideline.

Against the run, he uses very good play strength and good pad level and hand placement to set the edge on runs his way or when facing base blocks as a two gap defender. He can reset the line of scrimmage driving back blockers. Very good aggressiveness when taking on pulling linemen or tight ends on slide blocks. He has good mental processing on runs away from him and takes good angles in an effort to beat blocks. He shows good pursuit and effort to get after the ball and is a strong tackler.

At West Virginia if your assignment is to block Bradley-King you had better take your job seriously. The tight end finds this out quickly.

At West Virginia he is standing up on the right edge and will read the block and duck under the attempted block from the tight end to make the tackle in the backfield.

At West Virginia, this time standing on the right side he will avoid the slide block and make the tackle for a loss from the backside.

Against Texas Tech, a play of him on the front side setting the edge and forcing the play back inside.

Against Oklahoma State, he lined up as the 4i inside the left tackle and uses strength and effort to not let the guard across his face and makes the tackle near the line of scrimmage.

His feet are heavy and it takes him a few steps to get going and his burst off the line of scrimmage is adequate. He’s a bit tight hipped and doesn’t have a lot of bend when speed rushing. He was uses as a looper on stunts but didn’t show the acceleration to be consistently effective. He can focus too long on who he is facing and has marginal timing and quickness when shedding blocks that he must improve upon.  Not a fit for a one gap defense lacking the snap quickness to get into gaps laterally. Doesn’t currently possess the technique to handle double team blocks when lined up inside.

At Oklahoma, he is the 4i inside the left tackle and you can see the strength to push the left tackle (who outweighs him by about 70 pounds) into the backfield but can’t get off the block to make a play on the runner.

Overall, Bradley-King has good play strength, heavy hands, and good mental processing reading blocking schemes and is an effective power rusher.  He needs to improve on timing when shedding blocks, quickness at the snap and get more experience dropping into coverage.

He is not as athletically gifted  and twitchy as other Edge players in this draft but his motor and effort is hard to match. His strength is also very impressive. While watching his games I had to go back and check his weight a couple times. He plays bigger than his size.

His best option may be as a strong side defensive end in an even front in a two gap system but he could also be outside linebacker as well. For the Steelers he could fit as an backup outside linebacker able to spell the starters for 10-15 plays a game and as a core special team player.

Games Watched:  2020 – At West Virginia, At Texas, At Texas Tech, At Oklahoma, Vs Oklahoma State