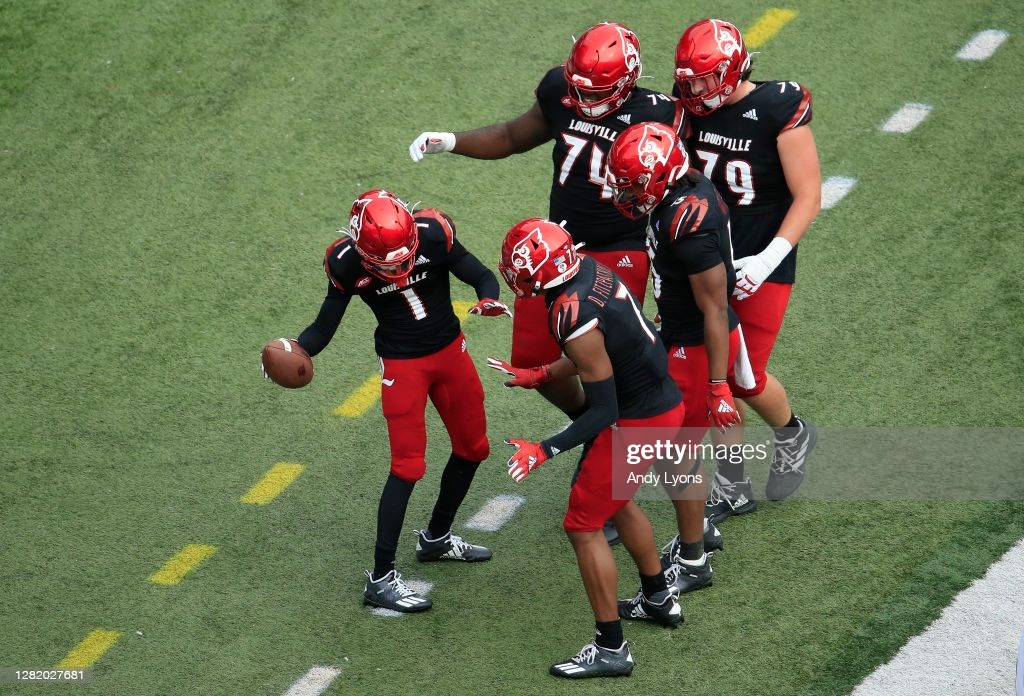 -Possesses great straight-line speed and burst for the position, getting up to that top speed quickly once he gets out in the open field
-Used on jet motions to either commit defenders to his speed threat or get him the ball in space on the edge
-Great when targeted on shallow crossers or quick outs to get him the ball quick off the snap with room to run
-Deadly up the middle as a seam stretcher from the slot with the jets to run past safeties that don’t respect him deep
-Will hit the stutter and go on the vertical route to get defenders to freeze then hit the gas to burn them deep
-Has shown good concentration on the football when hauling it in over the shoulder or having a defender in close proximity
-Impact in college was actually limited by inconsistent QB play, having been wide open on several occasions with the signal caller missing him

-Has impressive long speed, but his lateral quickness isn’t anything special
-Relies more on his speed than being a precise route runner to create separation
-Ran a fairly limited route tree in college that mainly tried to get him in space
-Frail frame and lack of size provide lead to dropped balls when hit in the process of making the catch
-Won’t be able to pick up YAC with physicality by breaking tackles
-Isn’t going to win many jump ball situations
-Will struggle to get off of press coverage vs physical athletic corners at the next level
-Extremely thin frame gives concerns of injury and durability in the league

-Junior prospect from Miami, Fla.
-Was a dual-threat QB in high school defeating teams as a passer and runner
-Was a track athlete as a prep, running a 10.83 time in the 100m
-Father, Chatarius Atwell, played wide receiver at Minnesota
-Early enrollee to the Louisville program
-Played in all 12 games as a true freshman, totaling 24 receptions for 406 yards and two scores
-Played in 13 games, starting 11 as a sophomore, leading the ACC in receiving yards (1,276) and touchdowns (12) on 69 catches along with being used sparingly on rushing attempts and punt returns
-Played in 9 games in 2020, recording 46 receptions for 625 yards and seven touchdowns
-Opted out of the last few games of the year for the NFL Draft

“Tutu” Atwell may slight in stature, but don’t be confused with his impact on a field. Atwell possesses legit speed with that rare 2nd gear when he gets in open space to take it the distance. He enjoyed feasting in the slot for the Cardinals on most occasions, taking advantage of linebackers and safeties playing in the nickel. Here he gets a zone coverage look from Syracuse out of the slot, and gets inside leverage when he stems his route on safety #7 Andre Cisco who doesn’t respect him deep, blowing past him for the long bomb score.

Atwell was well used on jet motions to get him the ball on the edge with room to run. Even if he didn’t get the ball, defenses would have to commit bodies to him to respect his speed, freeing up inside runs. Here is a clear example against Virginia where he gets the jet sweep to the right, gets to the sideline, breaks through the arm tackle, and hits the jets, breaking away from everyone in pursuit for 6.

He makes defenders pay if they don’t respect his speed and burst, taking short passes over the middle or to the outside for big chunk plays. Here against Miami, Atwell catches the short drag route and turns up the sideline, breaking the angle of one defender chasing him and gets a block from a teammate, spring him for a long TD run.

For being a smaller receiver, Atwell has shown the ability to haul in some tough grabs over the middle and in contested catches. He has great focus at the catch point and sees the ball into his hands when making the catch. In this example vs Notre Dame, he gets behind the defender, and makes the grab in bounds along the sideline with both the corner and safe attempting to break up the pass.

Atwell is quite the athlete with the track background, but his skills as a wide receiver need refining to excel at the next level. He has a painfully thin frame that results in him being dislodged from the ball often when trying to make contested catches.

Atwell lacks elusiveness both as a route runner and as a YAC creator. He tends to round his routes, relying more on speed to make plays than actually running crisp breaks. Here he gets up on the defensive back, but takes too many steps and rounds his route back to the QB, making it easy for the defender to stay on him and essentially takes himself out of the play.

His lack of shiftiness and size make him easy to bottle up at times on gadget plays as well. Here against Pittsburgh, he gets the jet sweep, but bounces it to the sideline instead of cutting it up field, resulting in the defense rallying to the ball and loss of yardage.

Overall, Atwell has the speed to create problems at the next level, but coordinators are going to have to be creative scheming up ways to get him the ball in space. More athletic corners won’t allow him to stack them as easy as college corners did, meaning he’ll have to become a better separator with his routes to really succeed. He should come in as a 3rd or 4th option to serve as a decoy for more of a prototypical receiver as well as be used in gadget/ short game to get him the ball in space and work as well as challenge defenses vertically. I compared him to what Marquise Brown provides the Ravens as a big-play threat, but his size and route running limit him to more of a complimentary role to pair with a possession type receiver.

For the Steelers, he would play a similar role as what Ray-Ray McCloud is supposed to provide the offense as an explosive player in the slot. He isn’t close to the physical player Juju Smith-Schuster is as a big slot receiver, but he could open up the passing game over the middle, making defenses commit bodies to him due to the threat of his speed, opening things up for Claypool, Washington, and Diontae Johnson. He also could contribute in the Quadree Henderson role of Matt Canada’s offense on schemed touches via jet sweeps, screens, and other plays to creatively get him into space. John Brown has expressed interest in signing with Pittsburgh, but the Steelers could figuratively target Atwell to provide the same thing and spend their limited FA dollars elsewhere. He can have moments of dynamic play at the next level, but consistency and scheme versatility will be things he’ll have to overcome to be a respected threat.