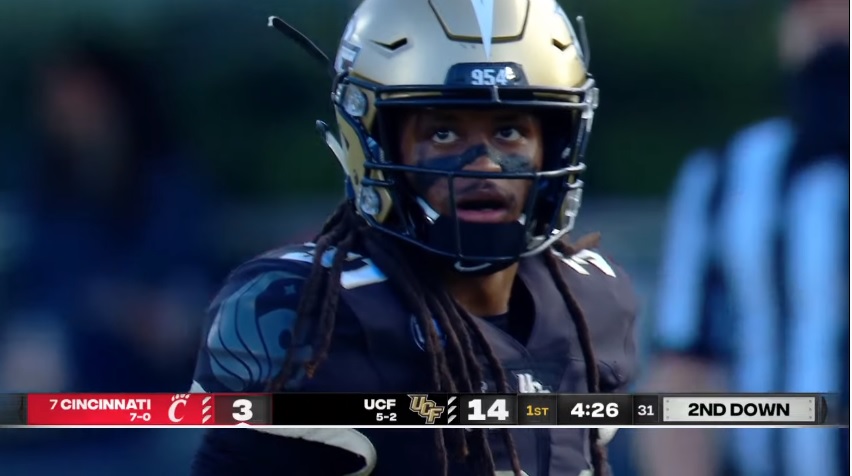 After dedicating some time to boundary cornerback prospects, today, we resume the search for versatile, slot replacements for the impending potential loss of one of the game’s premiere slot options, Mike Hilton.  Today, we’ll be taking an in depth look into a versatile slot prospect who has generated buzz as a top level cornerback among several different draft evaluation sites after a strong senior bowl performance, UCF’s Aaron Robinson.  While I may not necessarily share the same evaluation as others, Robinson’s coverage versatility, along with physicality in the run game, will make him a valuable sub-package fit for most teams across the league.

Upon watching Robinson’s film, it immediately stands out that he is in a league of his own when it comes to open field tackling at the cornerback position.  On the first rep against Cincinnati, Robinson, aligned in press coverage to the boundary, matches his receivers inside release before diagnosing the crack and replace, closing space aggressively, and executing a textbook hawk roll tackle to drop the slippery Desmond Ridder behind the line of scrimmage.  Later in the game, this time aligned as the field corner, Robinson once again matches his receiver off of the line before recognizing the stalk block, defeating the block with physicality, breaking down, and wrapping up to secure another stop on the read option.  On the third rep against Houston, Robinson, aligned in catch technique over the slot, matches an inside release into the box before diagnosing run, establishing contain by boxing the blocker to stay clean, and once again shooting low to drop the back immediately after a short gain.

While Robinson is far from a world class athlete when it comes to top end speed, he consistently displayed the ability to carry receivers across the length of the field on crossing routes.  Below against Houston, Robinson, aligned in catch technique over the slot receiver, diagnoses the shallow crosser immediately, flipping his hips efficiently, working horizontally through traffic, and closing to finish through the pocket with physicality at the catch point, securing an impressive pass breakup.

Although equipped with solid man coverage skills in his arsenal, Robinson flourishes when able to use his anticipation and route recognition skills out of zone coverage assignments.  In the first rep, against Memphis, Robinson, working out of Cover 2, sinks to gain depth at the snap, maintaining proper outside leverage while eying the quarterback, before flying inside to undercut the hole shot, nearly securing an interception in the process.  Later in the same game, Robinson, once again working out of a Cover 2 zone, aligns in press, funneling the receiver inside with fluid footwork off the line before showcasing great hip mobility to turn and make a diving attempt to undercut the hole shot, once again nearly securing an interception.

Serving as a versatile chess piece for the Golden Knights defense, Robinson was asked to blitz far more often than a majority of collegiate cornerback prospects producing mostly positive results, showcasing solid timing and instincts attacking from both the slot and boundary.  Against Cincinnati, aligned at linebacker depth to the tight formation, Robinson times the snap perfectly, flying off the edge untouched and arriving at the quarterback almost immediately to force an hurried throw.

While Robinson has solid hips and change of direction for the position, they are often not quite quick enough to mask his significant lack of arm length.  In the first rep against Houston, aligned in press coverage over the slot receiver, Robinson fails to get hands on the receiver, and is a step slow to match his inside release, ultimately allowing for an easy pitch and catch on the slant.  Late in the fourth quarter against Memphis, Robinson follows motion from the boundary into a stack over the slot, staying patient in his catch technique, yet appearing a step slow tracking the receiver out of his break on the out route, allowing noticeable separation for the game winning score.

Although Robinson certainly has the speed and change of direction skills to carry receivers vertically, his lack of length can make it difficult for him to contest pass catchers downfield when out of phase.  Aligned in catch man over the slot, Robinson does a great job to allow no separation for the Memphis receiver on the hitch route before smoothly transitioning into plaster technique on the scramble drill.  Nonetheless, with an impressive back shoulder throw from the quarterback, Robinson, though only slightly out of phase at the catch point, is unable to play the pocket due to his severely lacking arm length.

While his unmatched physicality and aggression are the predominant traits that will ensure Robinson hears his name called on NFL draft weekend, over aggressiveness can occasionally lead to compromised assignments and missed tackles.  Against Cincinnati, Robinson flies off the edge untouched, yet attacks directly at the slippery Desmond Ridder, ultimately completely whiffing on the tackle attempt and opening a lane for the quarterback to drift toward the sideline and complete a downfield pass attempt.  Later in the same game, aligned at the end of the line of scrimmage, Robinson attempts to beat his man quickly with an inside rip move, ultimately getting sealed off inside, losing contain, and opening a lane for Desmond Ridder to gallop into the second level untouched.

Overall, while Aaron Robinson is certainly going to be an intriguing mid round prospect due to his unrelenting motor and physical demeanor, I simply do not believe that he is a cornerback at the NFL level, whether on the boundary or in the slot.  Contrarily, I believe that Robinson’s ideal fit at the next level will come as a sub package, dime backer, where his lack of length would be masked in coverage while his combination of run defense and blitzing ability could be maximized.

Next to Devin Bush, Robinson could provide another speedy, man coverage capable player on the inside, adding versatility to a Keith Butler defense which is heavily reliant on Cover 1 pressures.  In shallow underneath zone coverage, Robinson’s instincts, speed, and physicality, could allow him to function fluidly as a hook/curl defender with the ability to carry the seam in Tampa 2 schemes.  In an ideal world, I believe that Robinson could project similarly to Deone Buccanon, with the impact that he provided to the Cardinals as a speedy dime backer, who similarly converted from defensive back, providing speed, coverage ability, and blitzing versatility to the linebacker position on passing downs.

While I strongly believe that any team drafting Robinson with the intention of using him as a traditional boundary or slot cornerback will be met with disheartening results, a transition toward sub-package box work could certainly maximize his NFL value.  If Robinson is available on Day 3, he could be an intriguing prospect for Pittsburgh, as he provides significantly more speed, coverage ability, and blitzing instincts than current rostered dime backer prospects such as Marcus Allen.