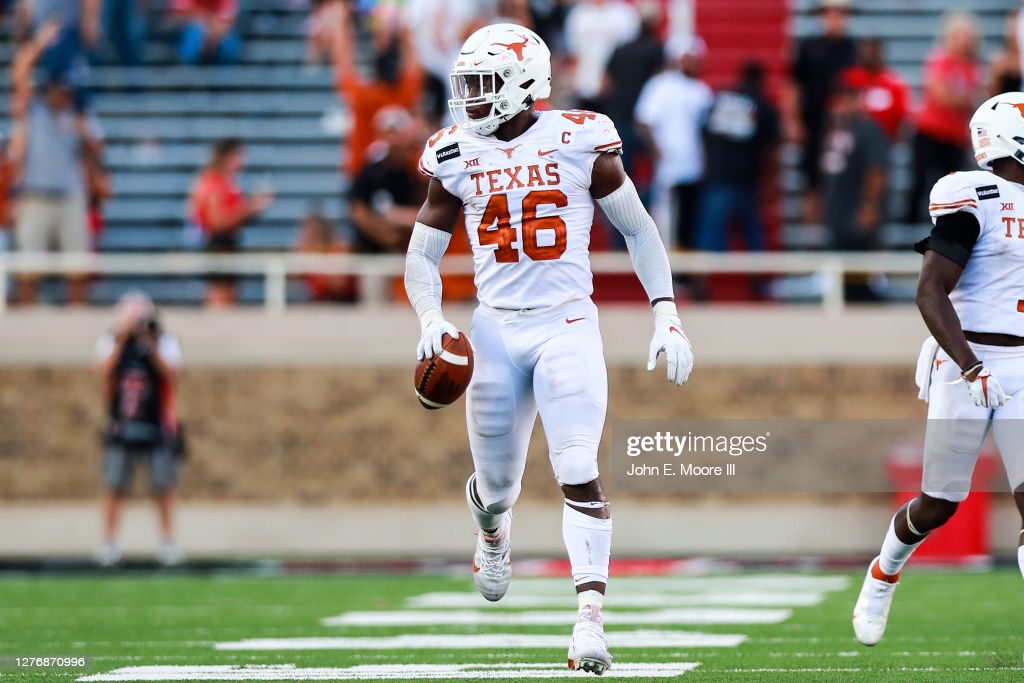 -Good athlete in terms of play speed, strength, and explosiveness
-Versatile defender who has played with both his hand in the dirt and as a standup pass rusher, having lined up on either side of the ball and has experience as an off-ball linebacker and detached in the nickel
-Had good leg drive when making a tackle on a ball carrier
-Can bring the boom stick as a hitter
-Can be an effective edge setter and string out the outside run to the sideline
-Displays good pursuit of the football as a run-and-chase defender as well as a pass rusher
-Has a good motor and provides good effort from the backside
-Does a good job of working around the cut block from the back to keep pursuing the QB
-Good at stunting inside on his pass rush and has the strength and athleticism to stack and shed blockers on his pass rush
-Demonstrates a chop/rip move as a pass rusher on the edge to get the edge of the tackle
-Can make zone drops and make plans in the passing game to contest passes
-Tends to be in the right spot at the right time when in zone, displaying good instincts and ability to read QB’s eyes
-Has experience on special teams and the resume to make plays in that area

-Junior prospect from Conroe, Texas
-Competed in soccer and track in his youth, also played basketball in high school
-Played extensively as a true freshman while recording 2 starts in 14 appearances, recording 20 tackles with a sack and forced fumble
-Played in and started all 13 games, recording 90 total tackles, 13.5 TFLs, and 5 sacks along with 1 FF and 2 INTs
-Played in 9 games his junior year, racking up 55 total tackles, 15.5 TFLs, 5.5 sacks, 3 FF, and 1 fumble recovery
-Originally born in Lagos, Nigeria, came to the US at age 10
-All-Big 12 First Team in 2020

Joseph Ossai is an athletic defender who captured the national media’s attention for his stellar performance in the Alamo Bowl vs Utah. The junior prospect plays with his hair on fire as all times, showing off an impressive motor as a sideline-to-sideline defender and as a pass rusher. His pursuit and athleticism are on full display here on this rep where he gets to the outside shoulder of highly-touted Teven Jenkins, dips down and rips through the block around the corner, and then runs down the QB for the big sack.

His speed, strength, and explosiveness help his cause in terms of arriving to the ball in a hurry and with nasty intentions as he can get the highlight hit as a defender. Here he stacks and sheds the TE at the line and goes through the QB for a key stop in the red zone.

Ossai often wins with pure athleticism with his pass rush but has demonstrated a chop/rip moves on the edge and the ability to stack and shed with his play strength. Here against TCU, he slaps the outside shoulder of the right tackle and then chops down the tackle’s arm with his inside hand, getting himself free to finish at the QB.

Ossai has some versatility to him as well, as he has played in the second level of the defense as an off-ball linebacker as well as on the edge. For his size, he does fairly well in terms of making zone drops and moving in a backpedal. On this play vs Louisiana Tech, he lines up as an off-ball linebacker, starts his zone drop, but recognizes the tipped pass and runs underneath for the INT.

Not only will Ossai provide versatility on defense, but he has shown the ability to impact special teams as well with his athleticism and effort, as seen here on this blocked field goal attempt.

Ossai is a raw player who can overrun plays at times and will take poor angles to the ball on occasion. Like on this play against Utah, he ends up making the tackle on the running back, but he rounds the corner and reaches out with his arm to trip him up rather than taking a quick step inside and taking a more direct angle to the ball. He will rely on his speed too much at times, resulting in arm tackles or missed tackles.

He also needs to improve his arsenal of pass rush moves and ability to get off of blocks. On this play, he engages with Teven Jenkins, but fails to get a push or disengage with the blocker, who neutralizes his rush and eventually puts him on the floor.

Ossai gives effort as a run defender but doesn’t have the best anchor and can lose gap integrity at times. Here against Teven Jenkins, he shoots inside and gets washed clear out of the play, not getting hands-on with the tackle or getting into his gap.

Ossai has the upside teams look for in athletic specimens and his tweener frame suggest he could serve as an off-ball backer in a 4-3 or potentially an edge defender for a 3-4 scheme depending on the team’s need. He plays better standing up rather than his hand in the dirt, and while he isn’t the most fluid moving backward given his size, he has the capability to do so if asked to make zone drops in coverage. However, he is best suited to be used as a pass rusher that may not win consistently always on the edge but can be a weapon on exotic blitz schemes if sent from all different areas of the field and used on twists and stunts. His usage, athleticism, and skill set remind me a lot of Jamie Collins and how the Patriots would use him as an off-ball linebacker, an edge defender/pass rusher, and his athletic traits making him a chess piece in Belichick’s defense, along with the special team’s contribution.

Because of the lack of talent at the position this draft season and rawness associated with Ossai as a prospect, Pittsburgh would be wise to stay away in Round 1. However, should he circle around on Day 2 of the draft with other edge rushers going ahead of him, he could be an intriguing option as a potential athletic replacement to Bud Dupree who could be utilized inside as well depending on how he adjusts to the speed of the game at the next level. He will be an impact special teams player Day 1 and should find work early in his 1st season for an NFL defense as he continues to learn the game and come into his own.