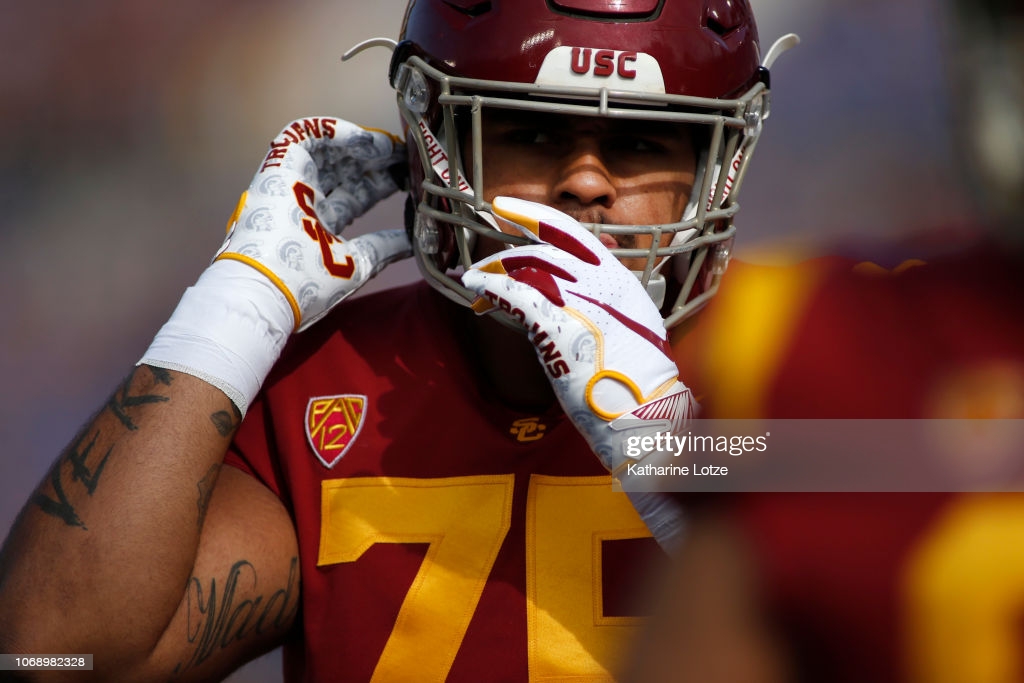 -Good athleticism for the position and his size
-Isn’t elite in terms of speed or explosiveness but is a fluid mover that can make tougher blocks
-Easy mover out in space and from side to side
-Has good initial drive out of his stance in run scenarios
-Good compliment to the center when doubling on the inside
-Can climb to the second level to pick off a backer and also get out in front on pulls
-Does a great job walling off defenders angling his body to create running lanes
-Very capable at handling switches on twists and stunts inside
-Able to punch and replace when he starts to lose hand position
-Plays with his on a swivel looking for work in pass protection
-Plays with active hands ready to punch in pass sets
-Showed great position versatility playing LG and then transitioning to LT his junior season
-Played at a high level consistently as a guard, and held his own at tackle

-Relies mainly on his quick set in pass protection rather than setting vertically
-Plays with a good base to anchor, but will get pushed back in the pocket vs power rushers
-Could stand to hold blocks for longer in the run game to better clear paths for the back
-Doesn’t have the heavy punch you’d like to see to neutralize power defenders
-Needs to be more consistent with his pass set popping out to avoid allowing defenders to his outside shoulder
-Doesn’t play with a consistent nasty demeanor you like to see from interior players

-Redshirt Junior prospect from Oakland, California
-Named team captain for the 2020 season
-Played mainly as a reserve as a freshman after redshirting his first season on campus
-Started 13 games a LG as a redshirt sophomore, then transitioned to LT for his junior season after Austin Jackson declared early
-2020 All-Pac-12 first team, 2019 All-Pac-12 second team

Alijah Vera-Tucker has displayed his versatility and willingness to do what is best for the team during his time with the Trojans. Originally a guard recruit out of high school, Vera-Tucker went on to redshirt his first season in LA before earning a starting gig in his third year with the team. He became a consistent, reliable presence on the offensive line, showing his upper-end athleticism for the guard position with good initial explosion off the line in the run game and his ability to be fairly fluid in space. That athleticism is on display on this play against Notre Dame where he is quick out of his stance and sprints to the 2nd level, picking up the linebacker coming downhill, spring his back in the open field.

Vera-Tucker is competent at getting out in front on screen plays and pulls to the outside and can regularly climb to the 2nd level to get backers and safeties. He does a good job at creating a seal in the run game by angling his body against defenders. On this play against Notre Dame, Vera-Tucker gets out quickly, angling his shoulders on the defender’s inside shoulder to create a lane inside for his back to run through. He then proceeds to drive the defender back and finish him to the turf.

Vera-Tucker plays intelligent in pass protection, especially on the interior, keeping his head on a swivel and does a great job mirroring the pass rusher. Here he gets into his pass set fast vs the pass rusher on 3rd down, picking him up with a good anchor and hand placement, staying step for step with him and allowing the QB to sneak out for the scramble when he decides to tuck and run.

Another good example in the same game where he picks up the pass rusher, mirrors him laterally, and shows the ability to hit and replace when the defender tries to swipe his hands down, neutralizing the rush.

Vera-Tucker was moved to LT his junior season with the loss of Austin Jackson to the pros, and he held his own there. For example, on this play against Utah, he gets out of his stance quickly on his quickset, engaging with the defender and moving his feet in a mirror with the edge rusher. His outside hand gets outside the frame of the defender, but he readjusts and keeps his QB clean.

However, more of Vera-Tucker’s limitations were exposed during his time on the outside that were experienced the season before at guard. Like in the above video, he can struggle with hands placement at times, thus limiting his punch and effectiveness in neutralizing the rush. He also just doesn’t possess the functional strength to neutralize power rushers who get inside his pads. An example here where the defender continually works Tera-Tucker back into the pocket, walking him back into the lap of the QB and eventually gets the sack.

He possesses a good base in pass protection but will cede ground on a lot of reps to rushers with good play strength and power. Like on this rep vs Oregon at LT, he initially has a good set on the defender, but then gives ground quickly, leaning to Vera-Tucker getting off balance and the defensive lineman to get his outside shoulder on second effort and get to the QB, affecting the pass and resulting in the interception.

Overall, Vera-Tucker has shown the ability to play multiple positions along the offensive line if asked to do so. Many scouts and pages are high on him at tackle, however, his best bet to cover up his lack of length and functional strength and utilize his movement skills and lateral footwork would be to keep him inside at guard. Vera-Tucker has the capability to be a starting caliber guard and play tackle in a pinch right now but adding more functional strength to his upper and lower body as well as working on his pass set consistency will do him wonders in terms of his overall upside. Vera-Tucker should be able to contribute Day 1 as a starting guard in a zone or gap system where his slight lack of power and finish can be covered up by his ability to move in space.

In terms of Pittsburgh being interested in Vera-Tucker, they don’t really have a current need in a starting-caliber guard with Kevin Dotson and David DeCastro locked in place for 2021. However, if they feel that Vera-Tucker can develop into a starting-caliber tackle for them, and then potentially kick inside for DeCastro after his deal is up or should he decide to retire soon, he could have that Pro-Bowl upside on the inside as well as the position versatility the Steelers may find intriguing. I compared him to Justin Pugh of the Arizona Cardinals who himself was a tackle coming out of Syracuse but moved to the interior due to his movements skills for the position and being slightly undersized. Personally, I would be surprised if Vera-Tucker was the pick at #24, but I guess we will see how Pittsburgh values his position versatility and movement skills come draft day.