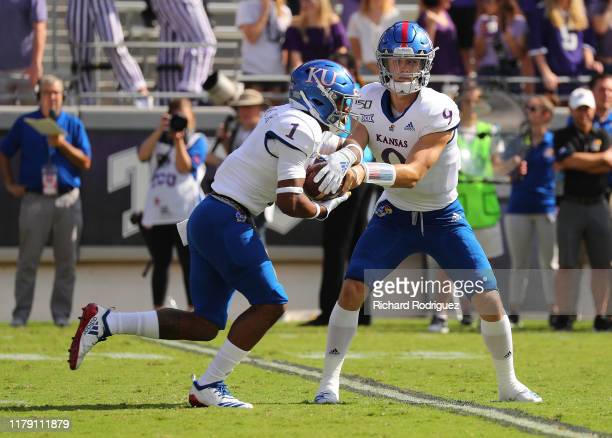 -Lined up as a traditional tailback, offset in the shotgun, and out wide as a receiver
-Has good speed and explosiveness for the position
-Able to get to top speed quickly and pull away from defenders in the open field
-Well used on outside runs and tosses to get him to the outside
-Has solid vision as a ball carrier, being able to hit smaller holes or bounce it outside if he sees an opening on the edge
-Does a great job in terms of change of direction and working laterally to make defenders miss and get in space
-Has a signature stop-and-go move to hit the breaks to make defenders miss and hit the jets again to weave through the 2nd level
-Can drop his center of gravity to cut on a dime and make a great jump cut to fake out would-be tacklers
-Can spin defenders out of their boots if they don’t come in and wrap up
-Has the functional strength to stay upright on some body shots and have the contact balance to keeping running downfield
-Not afraid of contact as a runner and will try and get what he can on contact
-Great receiving option out of the backfield in the flat, screen game and over the middle
-Can create separation as a route runner both from the running back position and when lined up split out as a wide receiver
-Comfortable being sent in motion and being used on jet sweeps
-Can attack the defense vertically up the sideline or up the seam as a tailback or receiver
-Mismatch nightmare for linebackers and safeties if they can’t get a jam on him
-Viable option in the return game having had notable production at Kansas

-Can occasionally break through arm tackles, but doesn’t have the size or strength to be a consistent option up the middle for tough yardage
-Won’t be going anywhere when he is wrapped up by a defender
-Thin frame gives concerns of durability at the next level for the position
-Can have ball security issues when concerning his frame and ability to sustain large hits
-Not a guy you want to stay home to pass protect with his frame

-Junior prospect from New Orleans, La
-Enjoyed a prestigious senior campaign as a prep athlete before committing to Kansas over hometown LSU
-Played immediately as a true freshman, registering 1125 rushing yards and seven TDs on only 161 attempts and 289 receiving yards on 33 catches with two more scores in 11 games
-Saw his workload increase as a sophomore but efficiency go down tallying 1061 rushing yards and 214 receiving yards and five total TDs
-Opted out four games into his 2020 campaign to declare for the 2021 NFL Draft, gaining a mere 196 yards rushing on 51 attempts
-Experienced kick returner, having served in that role his freshman and junior seasons, averaging 22.4 and 28.1 yards in those seasons
-All-Big 12 First Team in 2019, All-Big 12 First Team in 2018, Big 12 Freshman of the Year in 2018

Anthony “Pooka” Williams Jr. was a hot name growing up in New Orleans for his play on the gridiron. He was considered one of the best players in the area but spurned the opportunity to play for his hometown Tigers to travel to Lawrence, Kansas to play for the Jayhawks. Whether it be competition to get on the field, the draw of playing for LSU legend Les Miles, etc, Pooka had himself a fine career during his time with the team. He stepped foot on the field immediately and showcased his speed and elusive style as a runner in the Big 12 Conference. A small, thin back, Pooka relied on his ability to change direction and make defenders miss in space, which he did all too well. He possesses nice jump cut, spin, and stop-start moves to get himself away from would-be tacklers. Here against Oklahoma, Williams gets the handoff and hits the stop-and-go to fake out a defender, hits the hole and jukes out a defender to the right, then hits the stop-and-go again to cut back to the left and get into the end zone.

Pooka has good speed to him as well, being dangerous to take it all the way if he gets in space and threatens defenses. Here against Texas, the play breaks down when the hole on the inside run is plugged. However, Williams bounces it to the outside, turning on the jets and accelerating between two defenders in pursuit and pulls away from one chasing from behind for the touchdown.

He has the vision and awareness to get through small holes up the middle or the ability to bounce it outside if he feels he can get the corner. On this play vs Texas, he gets the handoff on the outside zone play, cuts it back up the middle, jumps out of a tackle, and weaves his way through the trash accelerating to the goal line for the score.

Despite his size, Pooka plays a lot stronger than you would expect. He runs hard and will willingly take on tacklers, occasionally shaking them with his low center of gravity and balance. Here against Oklahoma, Williams sidesteps one defender, runs past several more in pursuit, and has the contact balance to stay up after a body shot from #44 Brendan Radley-Hiles while jumping over a defender on the ground and fights for more yardage while being brought to the turf.

Pooka is very dangerous in the receiving game, both out of the backfield and split out as a receiver. He is dangerous in space with the ball in his hands and can be a mismatch for linebackers tasked to cover him with his ability to separate at all areas of the field. Here he comes out of the backfield against Iowa State, hitting a second gear as he gets past the line of scrimmage and runs right past the linebacker and safety that don’t play deep and burns them for the easy score.

Pooka’s size is a legit concern though at the next level, as he isn’t breaking out of any wrap up tackles and will take some big shots from defenders with a clear shot at him. Here he isn’t able to make the linebacker miss in the hole and gets wrapped up pretty easily and taken to the ground.

While he does do a good job of getting two arms on the football when contact is coming on occasion, he can have ball security concerns due to his stature and his upright running style can cause concern in terms of durability as a pro. Williams would also provide little-to-no help as a pass protector, but Kansas hardly ever used him in this area and the team selecting Williams would likely utilize him as a receiver on passing downs rather than keeping him in to block.

Overall, Pooka likely is not suited for a feature back role and will have to work more as a scat back/ satellite back in a tandem or committee approach. He doesn’t have the size to be a good back in a power run system, but he can be a dangerous weapon as a gadget player with his skill set as a receiver, elusive runner with his speed and burst, and his ability to offer special teams’ value as a kick returner. His film and measurables are eerily similar to Dexter McCluster who contributed in all the same ways as a Swiss Army Knife-type of player.

Teams that need a spark and chess piece that can move all over the formation and get production from a bunch of different spots would be wise to consider Pooka for their offensive system. Normally, Pittsburgh would be interested in more of a feature back runner, which can still be the case in the early rounds. However, given Williams’ skill set and how well he could fit into Matt Canada’s motion offense to get him in space and be used as a receiving threat, there could be some interest to add Williams in the later rounds of the draft. They already have Anthony McFarland on the roster in a similar role, but Williams arguably brings more as a receiver and returner. Should he prove reliable as a pass catcher early on, look for him to earn a role sooner rather than larger in a spread, motion-heavy offense at the next level.