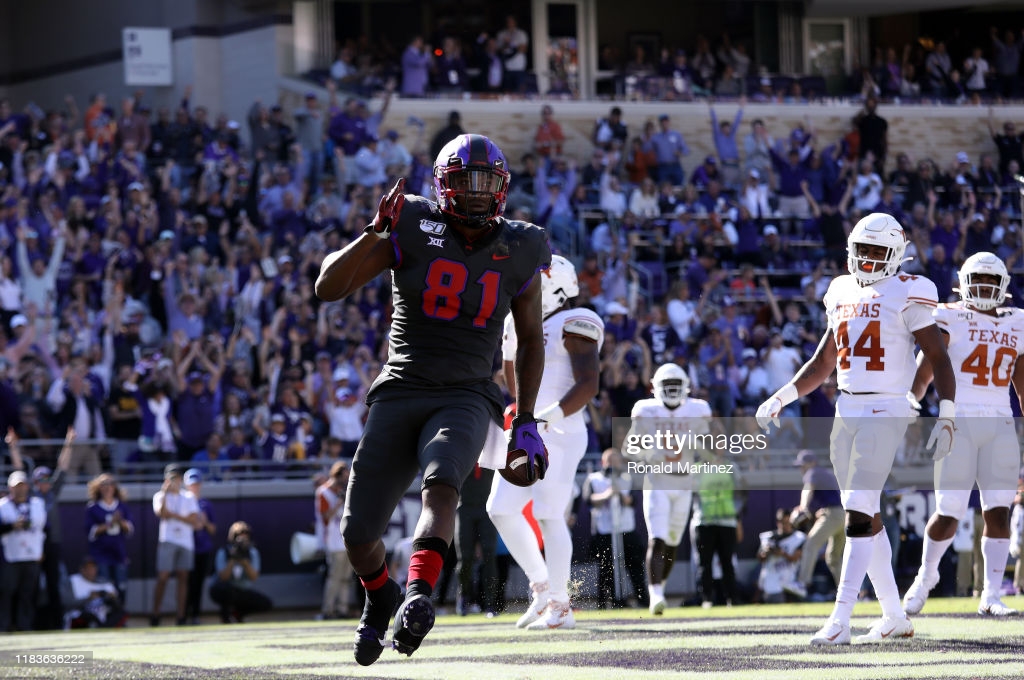 -True move-TE with impressive body control
-Legitimate red zone weapon that is a clear mismatch in that area of the field
-Consistently high-points the football and relies heavily on basketball background
-Very successful finding space against zone coverage, showing QB his numbers
-Comfortable as an exclusive Y-TE
-Likes to take advantage of smaller defensive backs with his size and strength as a boundary blocker

-Needs to continue developing technique as a route runner; way more athlete than technician at this point
-Still relatively new to the position from an IQ standpoint
-Rarely asked to play in-line in a 3-point stance
-Run blocking inside is non-existent at this point of his career; major learning curve ahead in that area
-Relatively limited as an after-the-catch guy; lacks burst, wiggle, and overall contact balance

-Played in 16 career games over three years at Texas Christian
-Finished three-year career with 32 catches for 403 yards and eight touchdowns
-Named Second Team All-Big 12 in 2019
-Originally committed to Marshall to play football and basketball before going the JUCO route to Northwest Mississippi Community College
-Signed with TCU in 2018 as the No. 4 TE in the country, choosing the Horned Frogs over Auburn and Rutgers

Though the tight end class feels relatively top heavy ahead of the 2021 NFL Draft, there are some valuable late round guys that could carve out solid careers in the NFL.

One of those guys is Texas Christian University’s Pro Wells, a true move tight end in this class who is almost exclusively a Y TE that thrives in the slot and makes some impressive plays on the football, thanks to his basketball background.

I’m not saying Pro Wells is next in line, but he has a similar background, having committed to Marshall University for football and basketball, before deciding to focus on football exclusively, decommitting from the Thundering Herd to head down the JUCO path before landing with TCU, putting up eight touchdowns in two years of exclusive action.

While he never really played in-line, he was quite the weapon for the Horned Frogs in the slot as a move TE, providing TCU with a tremendous red zone weapon that was a clear matchup problem.

Against Kansas here in 2019, Wells jumped out right away on tape, making this spectacular play in the back corner of the end zone for the score.

Wells loves to attack the football in the air, relying heavily on his basketball background to dominate in the air.

Similar play here against Southern Methodist in 2019. A real red zone weapon, Wells is a matchup nightmare for smaller defensive backs. He has great body control to box out and make the play on the football for the score.

Though he is not a good route runner overall, Wells knows how to reach landmarks and find space in zone coverage like he does here on this slant route against SMU.

He’s able to beat the defender inside and slip into space, showing his numbers and breaking the goal line for the score.

As a move TE, Wells provides TCU with a real weapon overall. He’s not overly athletic and won’t blow teams away with his athleticism or straight-line speed, but he knows how to get open in space and make plays, especially in the red zone.

Here against Texas in 2019 in the slot at the bottom of the screen, Wells runs a post route, slips underneath the single-high safety and makes the catch for the touchdown.

Wells showed he could stretch the field on occasion at TCU.

Again, he’s not overly fast and won’t threaten defenses vertically, but he can chew up yardage with his long strides, allowing him to make plays down the field.

Again, more of a landmark route runner than overall technique and mechanics, Wells shows here he can work into the middle of the field and make a play on the ball.

I love the way he breaks this route off just as he passes the setting defender, working into the soft spot in the zone to move the chains.

Overall, he won’t offer you anything in the run game for at least the first few years, but he has significant traits to like as a true move TE. With his basketball background and propensity to attack the football in the air, Wells could be a good red zone weapon right away in a No. 3 TE role in a creative offense.

He’s the exact type of tight end teams should be looking to take a chance on late in the draft in today’s era.