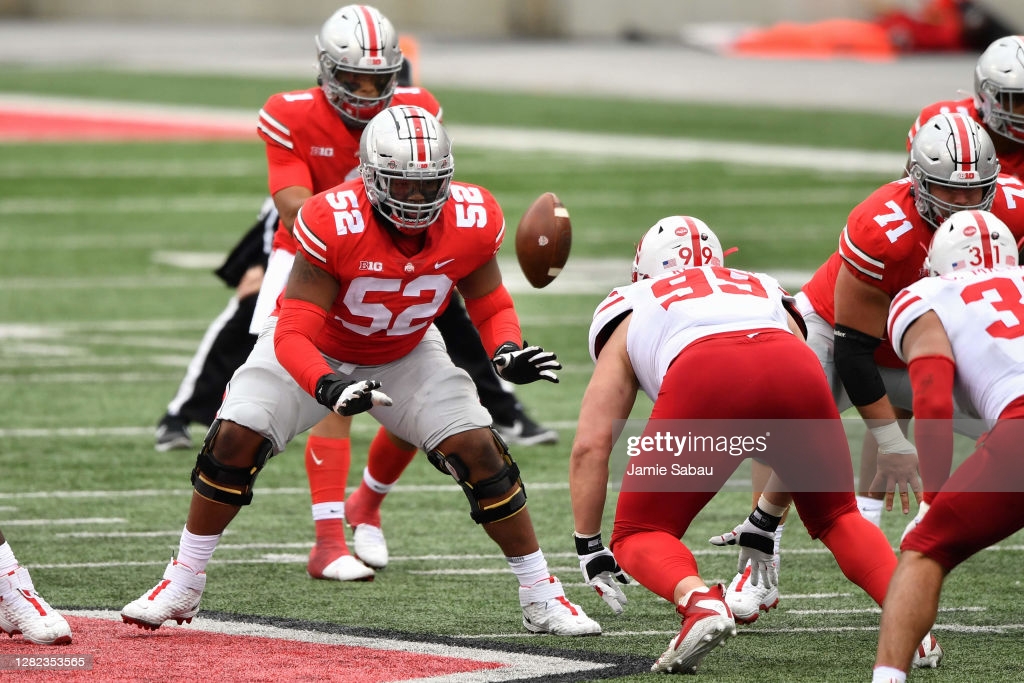 -Well-built interior player with the size and length to be a natural fit at the next level
-Fairly quick out of his stance as a run defender and in pass protection
-Able to set and anchor down vs the pass rush and can be extremely difficult to move off his spot
-Packs a mean punch as a pass blocker and is able to hit and reset his grab
-Plays with good hand placement inside the defender’s chest
-Displays good patience as a pass protector, playing with active hands and strong lateral footwork when looking o pickup pass rushers
-Plays with nastiness in the run game and will look at taking defenders to the ground whenever possible
-Can wash bigger bodies on the line on down blocks with his strength and power
-Does a great job at creating a seal by angling his shoulders when engaged to create wide running lanes
-Will help chip for the center or tackle before working up to the second level
-Has he movement skills to work up to the second level and pick up bodies in open space
-Keeps his head on a swivel, always looking for someone to block

-Can play a little upright at times and can stand to play with more bend in his hips
-Base can get a little narrow at times on drive blocks downfield when engaged with a defender
-Will occasionally get caught leaning into his block at times, making it easier to get shed by defenders with his weight coming forward
-Doesn’t possess elite traits moving laterally as an athlete or special explosiveness in space
-Probably is limited to guard-only duties at the next level
-Left two games early in 2020 due to minor injuries and a knee injury took him out of the National Championship Game, resulting in him watching the 2nd half on crutches

-Redshirt Junior prospect from Bellflower, California
-Played for powerhouse St. John Bosco as a prep athlete
-Saw some playing time as a Redshirt Freshman, starting the final 2 games before taking over the starting gig in 2019
-Has 28 starts under his belt across 3 different seasons
-Multi-sport athlete in HS, playing basketball
-Good NFL bloodline with his brother playing for Washington St. and Cal and his grandfather, Willie Davis, played DE for the Packers and is in the Hall of Fame
-1st Team All-American and All-Big Ten in 2019

Wyatt Davis was a highly-touted recruit coming out of St. John Bosco in California and he was quick to prove those remarks correct at the college level. Davis has been a star along the Ohio St offensive line in 2019, showing off his strength and power as a run blocker and pass protector for the Buckeyes. He is quick out of his stance and plays with grit and a mean streak in the run game. Here is a two-play sequence against Indiana where Davis goes to the 2nd level and picks up the linebacker coming to the gap, turning him away from the play and springing the back. The next play shows Davis’s strength, fighting off of the push/pull from the large defensive lineman and shoves up to the outside away from the play.

Another good example where Davis gets underneath the pads of the defensive tackle and drives him back on the outside run, eventually taking him to the turf.

He is strong as a down blocker and can handle rather tough assignments on his own, walling off defenders and creating wide running lanes for a stellar rushing attack. Here Davis does a great job on the reach block to the right, turning his shoulders and walling off the defender to create a seal for J.K. Dobbins to run through for a big gain.

Davis is also a more than competent pass protector, playing with active hands and feet out of his stance, having a strong punch when he gets his hands on his target. He is able to hit and replace, playing with good hand placement inside the defender’s shoulders and has a really strong base to set the anchor down against bull rushers. Here against Clemson in 2019, Davis gets a strong inside punch on the defender, getting hands-on the pass rusher’s shoulder and gives up a little ground but digs his feet in and neutralizes the rush.

Another good example in the same game where Davis anchors in on his pass set, takes the switch with Josh Myers the center, and sits in well against the rush, not giving ground and mirrors the defender for the entire play.

He also will occasionally lean forward on his blocks, showing a need to learn to play with more consistent bend and leverage to really take his game to another level. Here against Northwestern, Davis struggles to pick up the twist and tries to get the defensive end by leaning forward rather than moving his feet, causing him to whiff on the block and results in the pressure to the QB, throwing the ball sooner than he would’ve wanted which turned into an incomplete pass.

Davis also doesn’t possess the quickest feet for an interior offensive line prospect. Here he struggles to get across the defender’s face off of the snap, not being able to seal him off and his man ends up slowing up the back for the rest of the defense to rally to the ball.

Another example where Davis gets to the 2nd level of the defense but can move his feet quick enough laterally to pick up the linebacker.

Overall, Davis is a very well-spoken, high character player that has tons of talent and proven production that the collegiate level. He doesn’t have the elite quickness and lateral agility to pick up everything in open space, but the guy moves well for a player of his size at the position he plays and is always looking to get on a body until the whistle blows. Davis is a natural fit at either guard spot and can come in right away to be a plus-run blocker with his strength and power and the ability to grow into a premier pass protector at the position. He would be best suited to play in a power run system but can play gap/inside zone as well given the work he did with the Buckeyes. While watching him, the name Ben Grubbs came to mind from his time playing with Baltimore and the consistent presence he provided the Ravens for several years.

The Steelers likely won’t be looking for a starting guard, but should Davis make it to their 2nd pick at #55, the club could be interested at taking BPA given the age of David DeCastro and if they think either he or Dotson could potentially play at center. Regardless, Wyatt Davis should expect to hear his name called early and find a starting spot for a franchise within his 1st season.