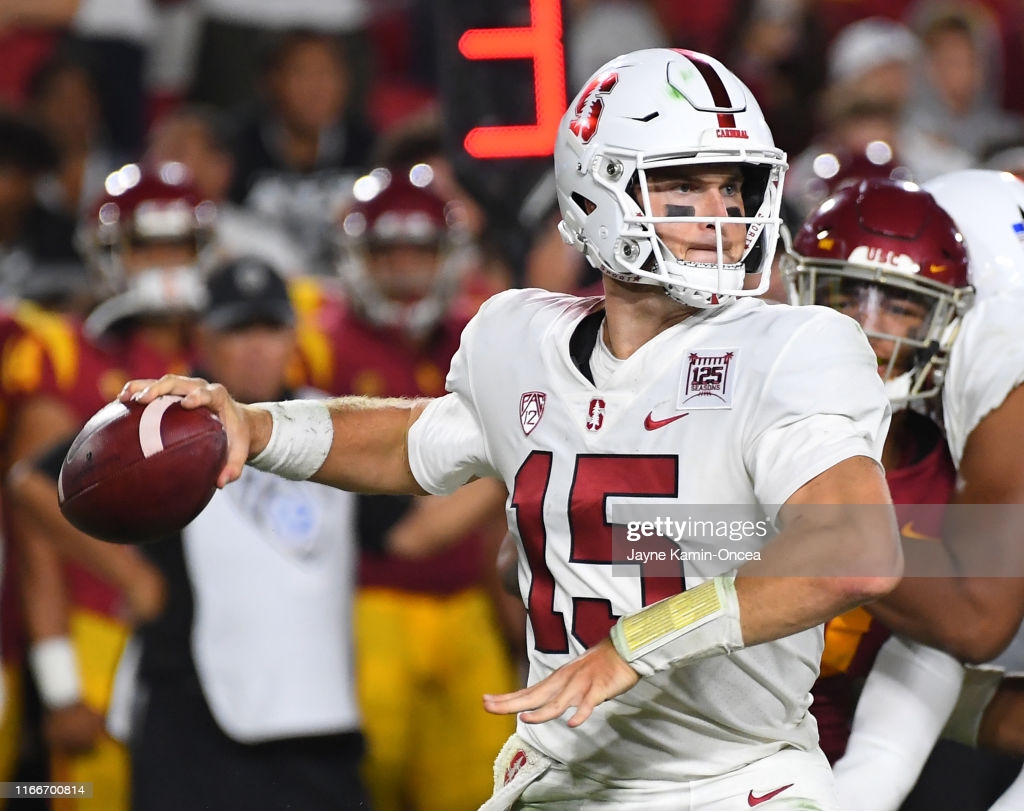 -Strong arm overall to thread the needle on tight windows
-Good overall mechanics with a quick release, drives the football well to all parts of the field
-Easy accuracy with the football
-High football IQ and makes good decisions with the football consistently
-Solid overall pocket awareness, unafraid to hang in and take a lick to make a play
-Feels the rush well and evades pressure with good footwork

-Struggles overall with accuracy on the move
-Relies heavily on mechanics for his accuracy overall; when feet aren’t set he’ll struggle
-Can get a little checkdown happy, rather than letting routes develop
-Lacks overall mobility to add another threat to his game, won’t extend plays often
-Experience simply isn’t there; just under 500 career dropbacks, one year of starting experience

-Played in 14 career games at Stanford over three seasons, starting 11 overall
-Completed 287 of 438 career passes for 3,468 yards, 18 touchdowns and eight interceptions
-Earned the Gundelach Award, given to the Most Outstanding Junior player at Stanford in 2019
-Team Captain in 2020
-Earned the Erving S. Zeimer Award for Team MVP
-Named All-Pac-12 honorable mention in 2020

In a big-name heavy quarterbacks class for the 2021 NFL Draft, Stanford’s Davis Mills is a guy that consistently flies under the radar despite having some strong tape for the Cardinal over the last two seasons.

Though he’s played in just 14 games and started 11 overall, Mills is a big arm, good overall mechanics, and easy accuracy for the position.

His build and overall throwing motion remind me of former No. 1 overall pick Andrew Luck. He is nowhere near the talent level that Luck is, but he pushes the football down the field well and has easy accuracy with the football.

He won’t have the draft hype some of the big names at quarterback currently have ahead of the draft, but he could be a very valuable, bargain grab later on in the draft.

Here against Colorado last season, Mills does a great job getting to his drop and driving on the hole shot down the right sideline for the big gain. The ball just flicks out of his hand with ease and seems to explode down the field.

When I watch Mills operate in the pocket, I see a quarterback who is calm, trusts his linemen and works through his reads quickly.

Against UCLA last season, he floats this one just a bit, but he has good touch to get this one over the two Bruins defenders dropping underneath the vertical route. Everything is just super smooth with Mills from his drop, his footwork and his release.

I really like Mills’ touch on intermediate throws. He has just the right pace and touch to hit his receiver in stride while placing the football just over the defenders hands.

Again, Mills displays good pace, touch and overall accuracy. He makes it look easy when he’s in rhythm and is quick with his decision-making.

This was my favorite play from Mills in 2020. He shows toughness throughout his film, but he hangs in here to take a big shot just to make a play down the field.

Mills drops  dime into his tight end’s hands near the front pylon of the end zone over standout Washington cornerback Keith Taylor Jr.

Though Mills is not the most mobile or athletic quarterback, I like the way he can occasionally extend plays and does not drop his eyes to the rush, instead keeping his eyes downfield looking to make a play with his arm.

This play against UCLA showed good footwork, an ability to get square to his target and uncork a strong through to the boundary for the first down.

Later in the season, against Colorado, Mills does a great job tucking the ball in, sliding his feet in the pocket to line up with the lane, and then works his way forward to move the chains.

Overall, I am worried about Mills’ lack of experience overall, but he has some intriguing tools to work with from the quarterback position and would not cost a premium draft pick.

He feels like a great pick on early Day 3 for a team with a veteran quarterback nearing the end of the line that could allow Mills to really sit and learn the system and the pro game before stepping into a starting role in a couple of years.