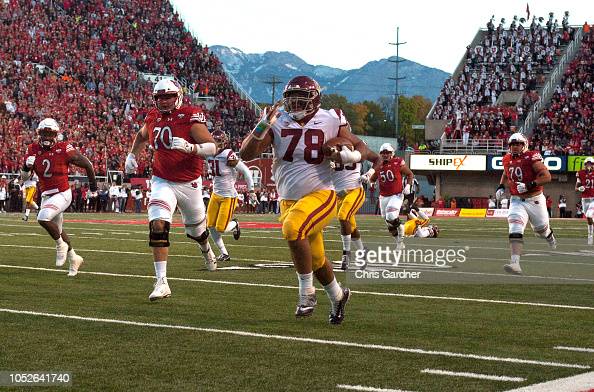 Jay Tufele is yet another player who opted out of the 2020 season.  His played primarily as the 3 tech for USC’s four man front. He has very good athleticism, a hot motor and a demeanor that has him attacking every play very aggressively.

As a pass rusher, he has solid quickness at the snap and was more consistent with his snap timing later in the season.  His motor is juiced up and he is at top speed in a heartbeat.  He is aggressive toward the offensive lineman and will use a bull rush, a stab and has most of his success with a swim move. He shows good pursuit to get to the quarterback and will chase to the sideline. When he hits his move correctly, he is difficult to block and is in the backfield in a flash.

At Notre Dame, he’s over the right guard and will use a club/swim on the center to force the QB out of the pocket.

Vs Oregon, he will again use a quick swim this time over the left guard to get some quick pressure.

As a run defender he has scheme flexibility able to play in a 1 gap or 2 gap schemes.  When playing one gap he has good snap quickness and can burst into gaps to disrupt blockers.  He has very good athleticism and good lateral agility to flow with Zone blocks to the outside. In a two gap scheme, he has solid hand placement and good strength to hold off and shed blockers. His motor shows up again in the run game as he shows very good effort to get through blocks and good speed to chase the ball. He is a strong tackler and can catch RB’s in his gaps and stop them immediately.

Vs Stanford, Tufele (78) is the 3 tech outside the right guard and displays his strength to shed the blocker and make the tackle near the line of scrimmage.

At Washington, again as the 3 tech he bounces off the right guard and shows off his speed and athleticism chase to the outside.

At Washington, he uses quickness and strength to duck into the A gap and get under the left guard to make the tackle in the backfield.

Vs UCLA, here are two plays against the run.  The first play he flows to his right and shows good strength to catch the runner and prevent further gain.  In the second he uses his strength to push back the left guard and the shed him to get in on the tackle.

He came out on true passing downs and lacks a pass rush plan.  At the snap, his pad level is inconsistent and pops up too often. He has marginal hand usage and for the most part just tries to run through blockers. He will go into blocks with his head down and loses sight of the ball and has adequate awareness on screens. He has limited pass rush moves making it easier for blockers. There were plenty of rushes where if his initial move was halted he would stop his feet and his power rushes weren’t very productive.  He has a poor anchor versus double teams and was marginal at holding his ground and staying square against blocks coming from his sides.  He has adequate mental processing to identify blocking schemes consistently.

At Washington, lined up outside the left guard he attempts to power rush and gets no push into the backfield.

At Notre Dame, he’s across from the left guard and comes out with his head down and then stops his feet aborting the pass rush.

Overall, Tufele has very good athleticism, and attacking demeanor and hot motor.  He is scheme diverse, has a solid swim move, pursues the ball wall and is a strong tackler.  He needs to work on just about all the technical aspects of the game like keeping his pad level low, using his hands effectively and developing a pass rush plan.

He really could have used the extra season to perfect his game. There is limited technique and a lot of physicality.  I wrote in my notes “a bull in a china shop”.  That said, he has a lot of positive tools and if he has a patient team that can coach him up he could become very disruptive. He may be a year or two away though before the production really shows up. Ideally he is a 3 tech in an even man front in a 1 gap or 2 gap scheme and will be limited to early downs initially.

Games Watched:  2019 – vs Stanford, At Washington, At Notre Dame, Vs Oregon, Vs UCLA