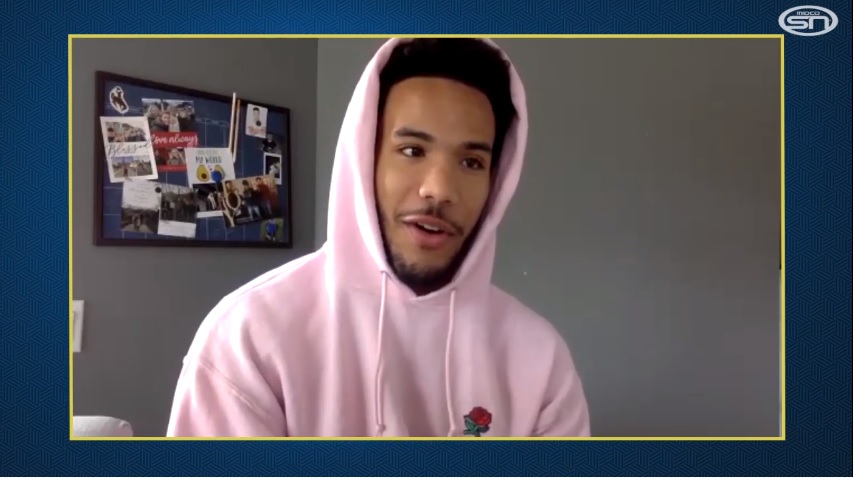 In my last report I discussed slot receivers. Another possible option for the Steelers in the 2021 NFL Draft is Cade Johnson.  Johnson wasn’t a highly-ranked or much sought-after recruit out of high school.  With a short list of offers, he decided to become a South Dakota State Jackrabbit.  From there, he proceeded to put up strong numbers in 2018 and 2019 with two seasons over 1,000 yards.  Johnson did not play any games in 2020 due to the COVID-19 pandemic, which makes his upcoming draft range uncertain, especially when considering the fact that he played against FCS competition throughout his entire college career.  However, his statistical showings in 2018 and 2019, as well as what he displayed at the recent 2021 Senior Bowl make him an interesting later-round slot WR prospect.

This first clip from South Dakota State’s 2019 game against Indiana State gives an example of Cade Johnson’s ability as a route runner.  Johnson is sent into motion pre-snap, then he turns his body almost lackadaisically post-snap and gets his eyes on the quarterback to sell what appears to be a shallow out-breaking route to his defender.  As the defender shoots down to close on him, he flips his hips and accelerates upfield into a go route.  He has his defender beat with nothing but green grass in front of him, but his QB is not able to hit him in stride, overthrowing him.

This clip is also from South Dakota State’s 2019 game vs. Indiana State.  Here, Johnson is again sent into motion then runs a straight go route.  He is able to stack the DB then get his head around to track the flight path of the ball.  He quickly contorts his body in order to make the catch by the sideline for a touchdown (despite flagged pass interference on the defense).

This is the last clip that I am going to discuss from the 2019 game vs. Indiana State.  It depicts Johnson’s hands and toughness.  Johnson is able to secure the catch across the middle of the field while absorbing hits from two defenders right when the ball reaches his hands.  Johnson has also shown the ability to fight through/absorb contact in his routes when a DB is physical with him.

This clip from South Dakota State’s 2019 matchup with Youngstown State depicts Johnson’s route running and understanding of the slot route tree.  At the snap, he bursts inside then begins to give the look of a whip route back to the outside.  He gets the defender, a linebacker (tough to cover Johnson with a LB), to bite on the turn towards the sideline before planting and cutting back inside to open space.  The pass is batted down, but Johnson was wide open.

In this clip from the same game vs. Youngstown State, Johnson shows he has the ability to pick up yards when given manufactured touches.  As I have pointed out in some of my other profiles on slot receivers, this is a massive plus for their draft stock when considering their fit in Matt Canada’s motion-heavy offense.  On this play, Johnson shows quickness and burst, as well as the ability to put his foot in the ground and cut away from a would-be tackler.

This clip is from the one 2018 game that I watched Cade Johnson play.  It was the FCS Championship Quarterfinal vs. Kennesaw State.  Johnson demonstrates his ability as a returner.  The game was rainy, and this impacted both offenses early on.  On this play, Johnson is able to jump start his team’s offensive drive by helping to put them in solid field position via an excellent return on the kickoff.  Johnson showcases vision, patience, and wiggle to evade defenders with teammates and the opposition in close proximity.  He provides return value.

In this clip from the recent 2021 Senior Bowl, Cade Johnson makes a tackle on punt coverage (there was a flag on the kicking team for illegal formation).  Showing NFL franchises that he can provide value on special teams will help Johnson’s draft stock.  It’s also how mid to later-round guys manage to keep roster spots as depth while proving their worth and showcasing their abilities to hopefully earn a larger, more defined role down the line.

This clip is also from South Dakota State’s 2018 game against Kennesaw State in the FCS Championship Quarterfinal.  Johnson is sent into motion pre-snap then aligns as the middle receiver in the trips set on the left side of the field.  As you can see, Johnson tries to engage with a block, but the defender easily shoves him out of the way to make a play on the tight end.  Johnson is a willing blocker, but he will have to work on his fundamentals, and even then, his size/play strength will likely limit him.  More of the same can be seen in his 2019 film.

Cade Johnson’s potential as a receiver, as well as his added value on special teams will definitely warrant him a mid to late-round selection in the 2021 NFL Draft.  Johnson’s a part of a deep WR group this year.  He’s another prospect that can be utilized as a dynamic slot option, and a team won’t have to use top tier draft capital to make him a part of their roster.  He’s a good gamble.