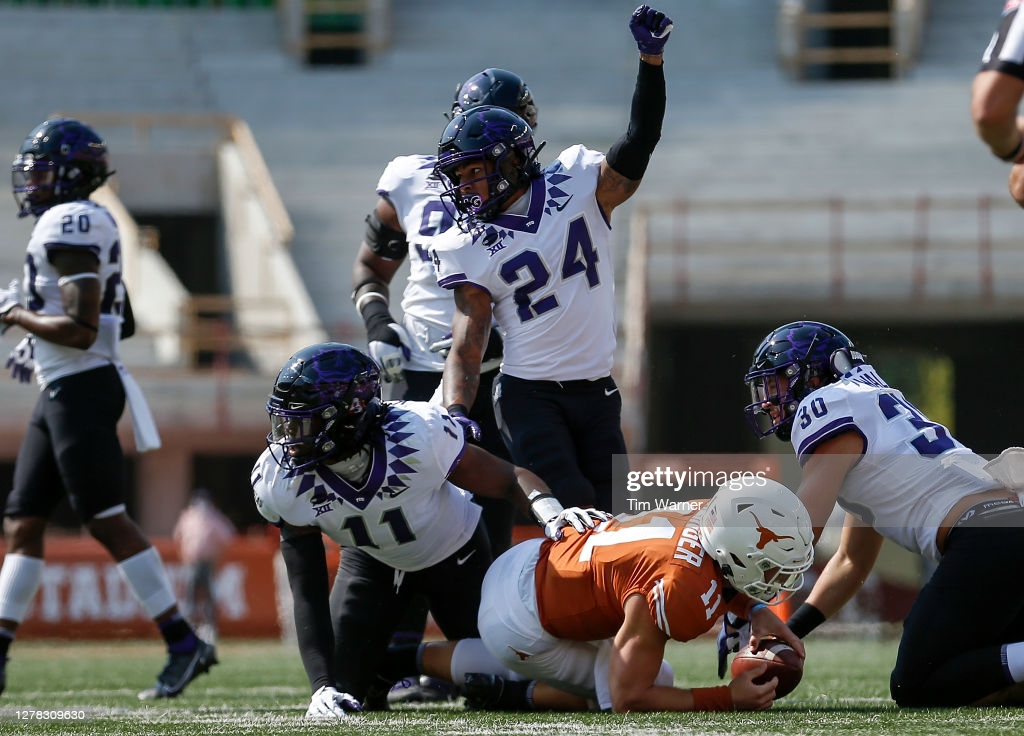 – Physical, downhill, and aggressive nature makes him play bigger than he’s listed
– Fills run with authority, throws weight around and pound-for-pound, a good hitter
– Reliable open field tackler with strong upper body
– Does well in breaking down and coming to balance as a tackler
– Takes good angles to the football in run and pass
– Shows plus hands, ability to track and pluck ball away from his body
– Closes well in pass game and disruptive at catch point
– Versatile, moved around the defense
– Young player, still growing

– Undersized and would be one of the smallest safeties in the league
– Average to below average athlete, lacks foot speed in open field, can struggle even when he has the angle
– Shows stiffness when asked to change direction, tight-hipped player
– May lack true home/fit at NFL level
– Vulnerable to biting on playfakes and offensive window dressing, caught out of position and beat deep too often
– Didn’t make many plays in backfield despite run-stopping ability

Ar’Darius Washington is a rare breed, a 5’8, 180 pound safety, but the dude can pack a punch. Which makes him worth watching. His calling card is hit power and overall physicality. Best when coming downhill, he packs a whale of a punch. Tons of examples of that to show, you see it in almost every game of his you watch, but my favorite came on the goal line against Texas this year. Longhorns run mesh and Washington has to rally to close the crosser. He does and smacks the receiver at the goal line, somehow keeping him out of the end zone.

Washington has plus hands and is capable of making plays on the football. Five interceptions his redshirt freshman year in 2019. This is a great one vs West Virginia. Angle and the finish downfield. Great rep.

Washington lined up everywhere but worked best when coming downhill filling the run. He’s a reliable, impactful tackler, someone able to deliver a blow without playing out of control and missing as often as he hits. Knows when to pop someone and when to come to balance and wrap up. You see the latter of that here.

But there is the obvious negative with his game. Size. Don’t see too many teams drafting 180 pound safeties. Since the 2015 draft, there have only been eight DBs (invited to the Combine) drafted who weighed under 180 pounds. And I think all of them were corners. Corner is a position where you can get away with someone smaller because they’re not as important in your run fits. Safety is different.

But Washington can play the run. The issue I have is that at best, he’s an average athlete. He makes up for some of that with good angles to the football but he has average to below open field speed and can’t always track down runners in space.

Know he’s playing in the box here and the run is initially away from him but he lacks the foot speed to catch up and gets passed by a teammate at the end of this play.

And here, Texas QB Sam Ehlinger is able to scoot away from him on this scramble for a long run. Not a good look for a DB. Not like that’s Kyler Murray running the football.

He’s also pretty tight-hipped. So trying to play him in the slot is going to be a tough ask, too.

The combination of small and slow isn’t one that produces NFL success. I’m always a fan of the little guy who plays with a chip on his shoulder and Washington definitely does. But not all these guys are going to turn out like Mike Hilton. Washington could become a solid special teamer and tone-setter running down kicks and punts. Poor man’s Damontae Kazee.