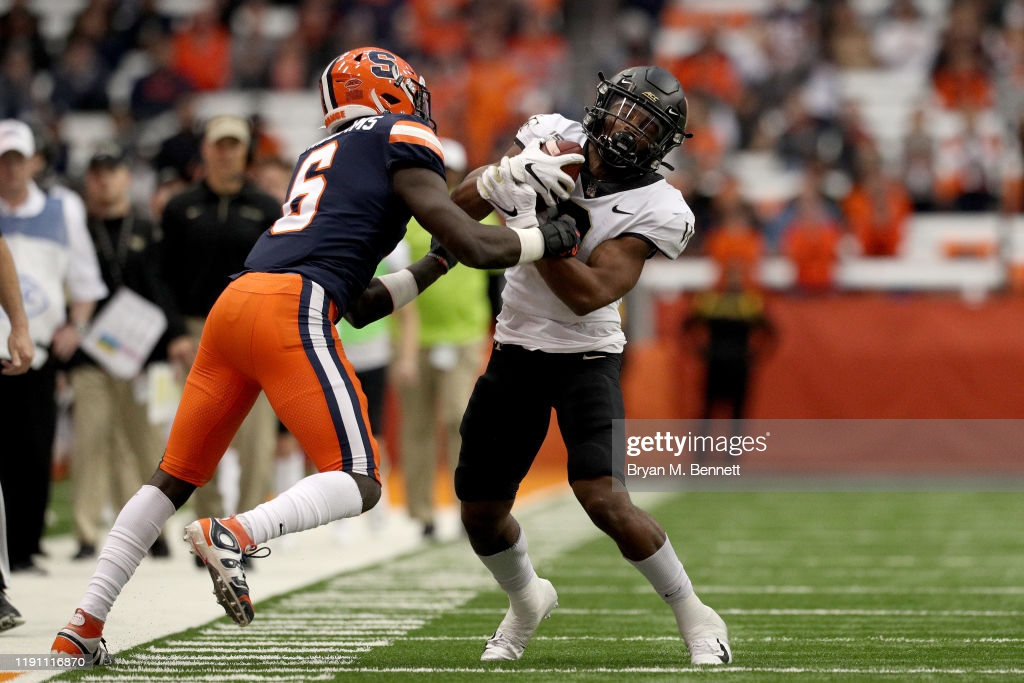 With the loss of nickel cornerback, Mike Hilton, earlier this week to the Cincinnati Bengals, cornerback again turns a position of need for the Steelers. Cam Sutton was able to be retained, however, I think the Steelers like to have him as an overall chess piece that can be placed wherever in a time of need until at least Joe Haden steps down.

Trill Williams is someone that checks all the boxes the Steelers often look at when drafting DB’s, for better or worse. Other than his round one name, Williams also has round one athleticism being laser timed at 4.34 with a 40” vertical jump. He’s not weak either being able to rep out 17 of 225 lbs on the bench. That combined with his lengthy frame has scouts more than salivating. It’s when you turn on the tape that you start to see some of his flaws come out.

I normally start with the positive about a player, but for where I want Trill Williams to play (nickel corner) his biggest glaring negative is his tackling. His tape is littered with missing arm tackles or throwing shoulders and allowing players to bounce off for extra yards. Watch him here against Georgia Tech. He’s lined over the slot at the bottom of the screen. You see him line up the RB and try to lay a big hit. Instead, he bounces off it and gains another 5+ yards.

This is super disappointing because you can see he knows HOW to tackle, and when he does he can really bring the heat, at that. He just doesn’t do it consistently enough to have confidence in it. Watch him here in Heinz Field, over the slot at the top of the screen, he navigates through the traffic to bring down the ball carrier well short of the first down.

The other thing I will mention about Trill Williams is he’s extremely physical as a corner. He falls under the Tomlinism category of “[you] rather say whoa, than sic em.” He’s definitely not afraid to get in a receiver’s face and rough him up a bit. While in all six games I watched, he was only flagged once for his technique, it’s something I’d be worried about the next level with the super offensively slanted rules.

Here against Pitt, you can see him truly bully the receiver, that’s going to be called all-day in the NFL.

This is another example of William’s physicality. He’s lined up over one of the top slot receivers in this year’s draft class in Amari Rodgers. He’s able to bump and run with him down the slot with ease. I want to emphasize that there’s no five-yard barrier for illegal contact in college football, so this is a legal play. It’s just something that sits in the back of your mind thinking about his transition to the NFL.

Williams was rarely targeted in the games I watched. He’s very sticky in coverage, especially for someone for his size, in the slot. You can watch him here again covering a seam in the slot. While you would have liked for him to track the ball a bit better, his positioning itself does the job in terms of creating the incompletion.

Williams is lined up again over Amari Rodgers. Watch how patient and calm he is throughout the play, being able to sit and explode out of his break to cut off any chances this out has of being completed. Admittedly, it’s not Rodgers’ best route, but when someone of his caliber is lined of across from you, it’s easy to want to guess a direction. Williams sticks to his technique.

Here’s our last man coverage clip. Williams again lined up over Rodgers in the slot at the top of the screen. It’s again an out route and again Williams easily covers it up. The actual exciting part of this clip is his hustle to chase this play 50 yards downfield, using his 4.3 speed, to track the receiver down.

Switching over to zone coverage, Williams’ hips are so smooth to drop into coverage and read the quarterback. While he may not be elite instinctually, he’s far from a liability as you can see him identify route combinations and flow underneath them, especially in out of bunch sets. In this play, he gets to show off his hit power on the pass breakup.

This INT is against the 2021 NFL Draft’s projected number one overall pick, Trevor Lawrence. Williams is dropping into the hook curl area and falls underneath the curl perfectly as Lawrence seemingly never sees him, throwing it right to him. Williams then shows off his wheels on the return.

Williams has a knack for making big plays as he has three return TD’s in his career. Before the coronavirus riddled season of 2020, Williams was slated to return punts for Syracuse, but due to losing out on spring ball, he wasn’t able to work on it enough to make the coaching staff comfortable with it. Safe to say they wanted to get the ball in his hands more.

Here, after an interception, he gets into pitch-relation with his teammate, who laterals the ball to him. Williams is then able to outrace the offense to the end zone for a defensive touchdown.

The following play may be the most impressive of the bunch. Against Wake Forest, Williams is able to strip the receiver clean and return it for a touchdown. IF you wanted to nitpick, Syracuse was up three in overtime, so technically he should have kneeled the ball here, but who am I take away a clear TD to seal the game, unreal play.

The last thing we’ll take a look at his blitzing from the slot. You can see Williams in blitz posture at the top of the screen. The QB keeps the ball on the read-option and you can see Williams run right through the RB on the way to wrapping up the actual ball-carrier. Great rep.

In the last play, we have Williams again blitzing off the edge. His elite speed is really shown off here as he’s charging from the backside. The tackle for a loss isn’t enough for him as he axes down on the ball as he’s tackling the ball-carrier and causes the red-zone turnover.

You can see there’s a ton to build around with Williams. He has all the intangibles in terms of athleticism. There’s just a good bit of his game that needs to be coached up if he wants to succeed at the next level. I don’t think he’s ready to step in and help a defense right away. That’s where I’m wary of him for the Steelers as they haven’t done a great job of drafting and developing defensive backs that are more raw i.e. Artie Burns, Terry Hawthorne, Doran Grant, etc.

For that, I’d be down to take a flyer on him in the fourth round as a developmental guy with a very high ceiling. I can say I like his game a LOT more than I liked Justin Layne coming out and Pittsburgh drafted him in the third. I would not be surprised if he ends up as an outside corner when it’s all said and done. If he lands in the right system he could be that chess piece you move around due to his versatility.

Projection: Late Round 3 – Early Round 4