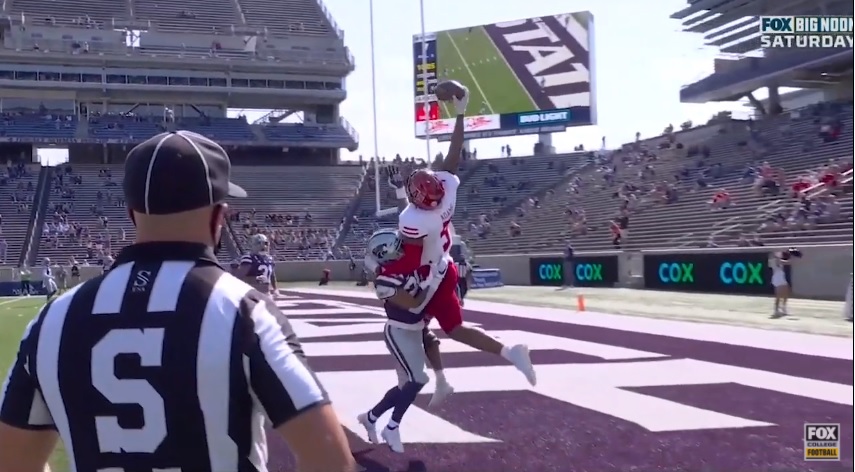 -Primarily lined up on the boundary for the Red Wolves on the left side, but showed some use out of the slot and use on jet motions for screen plays as well
-Possesses the size and strength to play with defenders draped all over him in coverage
-Comfortable making combative catches against defenders, out-muscling them for the ball
-Does a great job shielding off defenders with his body on back shoulder throws and end zone fades
-Can get inside leverage on a defender and box them out for the tough grabs over the middle on crossers and slant concepts
-Possess great body control when in the air going for the football
-Has a knack for high pointing deep balls over smaller corners with his size and leaping ability
-Has the catch radius to make plays on jump ball situations where the QB can throw up a 50/50 ball with confidence
-Makes some crazy acrobatic grabs in coverage, coming down with balls far outside his frame from different platforms
-Looks the ball in well on over-the-shoulder throws along the sideline
-Able to come back to the ball on inaccurate passes and compete to get the ball off the defender’s frame
-Not a bad run after catch guy, having the burst to turn up field and size to be difficult to bring down with one guy
-Has the size and physicality to be a strong blocker on the edge, jacking up smaller corners with a big punch getting up into their frame

-Has pretty average speed and explosiveness for the position
-Rounds his routes far too often when coming out of his breaks as a receiver
-Only has average get-off burst off the LOS and doesn’t generate much separation with his speed or acceleration
-Often has to rely on contested catches in tight coverage due to inability to properly stack corners at the top of his route
-Doesn’t have a well-versed route tree as a receiver, running mainly vertical go’s, fades, slants, and inside/outside comebacks
-Led the FBS by dropping 11 passes while posting a 12.4 percent drop rate as a senior
-Makes several bobble catches going to the ground rather than snagging the ball cleanly
-Consistency as a blocker needs to be improved, having moments he is engaged and moments he looks completely disinterested

-Father, Jonathan Adams, was a standout running back at A-State from 1998-2001
-Played as an all-state receiver as well as safety and returner in high school
-Was a highly regarded basketball player as a prep athlete while also competing in track
-Played in 11 games in a reserve role as a true freshman, recording eight receptions for 77 yards and a touchdown, while also returning 11 kickoffs for 226 yards
-Played in all 13 games, including one as a starter where he caught 17 receptions for 267 yards and three touchdowns
-Started every game as a junior, recording 62 catches for 851 yards and five scores
-Broke out as a senior, leading the nation with 121 targets that he converted into 79 receptions for 1,106 yards and 12 touchdowns.
-Suffered a hairline fracture on his hip at the end of the season, ending his time with the Red Wolves

Jonathan Adams Jr. made headlines with his stellar play at the beginning of the 2020 campaign for Arkansas State for his crazy contested catches and highlight TD receptions. His play in his final season really helped his draft prospects, as he really broke out when it counted most. Adams has the basketball background in high school and it shows with his leaping ability, body control, and catch radius to go up and get the ball at its highest point just like a rebound. He bullies smaller defensive backs on the perimeter and can impose his will in “50/50 ball” situations, winning far more than he would lose.

Here against Louisiana Lafayette, Adams gets an inside release off the line of scrimmage, starts to pull away from the defender on the seam, but slows down and elevates into the air on the jump ball that was slightly underthrown, making the tough catch with the defender’s hand in the middle of the catch point, and still comes down with the ball.

He has impressive play strength and the awareness to wall of defenders from the ball with his body, making tough grabs over the middle and along the sideline. Here on this play vs Kansas State, Adams lines up to the left in single coverage. He runs to the end zone and then comes back to the ball on the back-shoulder fade, boxing out the defender with his body and traps the ball against his side as the corner latches onto his other arm, coming down with the catch for the score.

Adams makes some crazy grabs in coverage, elevating up into the air and getting it off of the backboard, often times with one hand. On this paly against Texas State, Adams lines up on the right side stacked behind his teammate. Off the snap, he makes his way up the seam, and attacks the jump ball in the air, going up over the cornerback in coverage and the safety rolling over as well. He snags the ball at its highest point, controls the ball to the ground, and completes the impressive touchdown catch.

On this play in the same game, Adams shows his ability to adjust back to the ball that is a little underthrown, sliding to the turf and matching the catch of the ball while draped in coverage, keeping the ball off the ground and hauling in the score. He catches it with one hand, gets the PI call on the defender, and shows great concentration to bring in the difficult grab.

He has ability to create after the catch as a runner with his physical running style upon contact. Here on the slant route he takes a hard jab step outside, gets inside leverage on the defender, catches the ball and runs through two defenders, running downfield and breaks through another arm tackle before being corralled by multiple defenders inside the ten.

However, there are areas of Adams game that need to be addressed to succeed at the next level. He isn’t a refined route runner and relies on his strength and size to make tough grabs in tight coverage far too often. Here is a sequence of plays against Kansas State where Adams has fairly mediocre burst off the line, isn’t able to stack the defender on the inside release on the first two vertical concepts when he rounds his turn upfield, as well as on the slant where he telegraphs the inside release to the corner in coverage, allowing him to stay in-phase rather than making a quick break at the top of his route. He looks to be jogging at times when going through his routes, looking to body up defenders rather than create separation for an easier catch.

Another example where Adams struggles to get an outside release up the seam, being unable to stack the corner vertically and get any separation.

Adams also has his issues with drops concentrating on the football as it comes in, as well as consistency in effort as a blocker in the run game. His highlight blocks are impressive, but too often he lets his defender away from his frame, giving up on the block altogether.

Overall, teams may shy away from Adams’ small school production and question his ability to separate against athletic press man cornerbacks at the next level. However, his ability to succeed as a jump ball receiving threat shouldn’t be overlooked. He can be a gladiator over the middle, along the sideline, and especially in the red zone, and should only improve with more accurate QB play at the next level. A big reason for a lot of Adams’ drops were due to his downfield, combative catch style, making the chances of catching said-target a lot harder than shallow passes near the line of scrimmage.  Jonathan Adams Jr. has the traits to be a successful physical presence for a receiving game but will need to improve his ability to break out of his routes and blocking consistency to be considered more than a situational red zone threat.

In terms of the Steelers being potentially interested in Adams, they may typically look for more refined route runners at the position, but the team was represented at the receiver’s Pro Day and could look for another red zone threat to help out Ben if they do intend on playing Chase Claypool more inside this season. They will need a combative catcher to replace Juju Smith-Schuster in the offense, and Adams could fill the role James Washington play as a vertical, combative catch guy after the 2021 season. His draft stock will be pushed down in a deep class, but a team looking for a physical presence would be wise to target Adams as a value pick later on with the upside to make a notable impact at the next level.