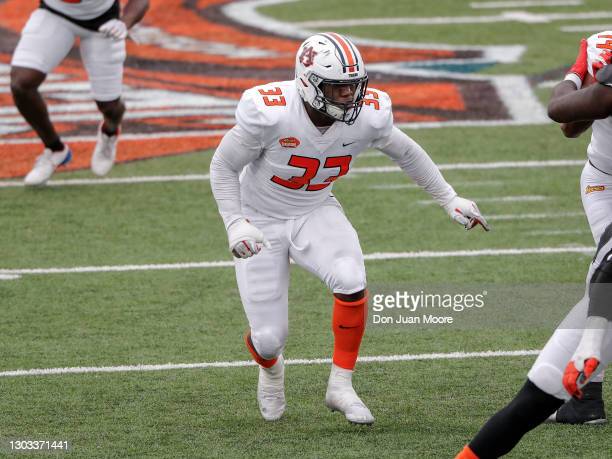 The first tape I watched was Auburn vs Georgia. Britt performed well despite Auburn falling 27 – 6.

The first clip is from the first Quarter with Georgia holding the ball inside Auburn territory. The Bulldogs ran a wide receiver tunnel screen to the field whilst faking a one back power play to the boundary. Britt has a guard pull away from him which is typically a sign of a run away from him. He is patient and does not chase this instead lets the play develop before seeing the QB throw the ball to wide receiver Demetris Robertson. Britt makes the correct read taking no false steps and gets downhill towards Robertson. Britt then tracks the path of the ball and avoids the block from Georgia LT Jamaree Salyer to make the tackle for a short gain.

This next clip taken from the Tigers loss to the Bulldogs was from the 2nd Quarter. This clip is an example of Britt’s struggles to play in space. Zamir White runs an angle route out of the backfield. After the catch he makes Britt miss easily and nearly reaches the End Zone. Britt’s change of direction and lateral movement is one of his weaknesses. The less space Britt has to play in, the better a player he is.

This clip taken from the same game is from Q2. Georgia ran a play action pass play. Britt gets his eyes caught in the backfield and isn’t able to react and reroute the TE out of the seam. This ends up being an easy completion for Georgia resulting in a first down. Britt struggles to convert from run to pass and does not move well backwards. The better coverage inside linebackers in the NFL, (Devin White, Bobby Wagner, Eric Kendricks) would both be able to read and react faster as well as have the athleticism to make a play on the ball.

This next clip is also taken from Auburn’s game at Georgia. Georgia ran inside zone into the boundary from a Trey (TE with 2 receivers to the same side) look. Britt does a great job again of diagnosing the play and getting downhill to make the thigh and roll style tackle on the running back. His biggest strength is his ability to come down hill, fit the run and take on ball carriers.

The next game I watched was the 2019 Outback Bowl where Auburn played Minnesota. This was the last game of Britt’s Junior season.

The first clip is from the first defensive play of the game. Minnesota ran outside zone towards Britt who is responsible for the C gap outside of the Offensive Tackle. The RB gets to the edge of the defense and tries to turn the corner. Britt is unblocked but takes a good angle on his way to the ball carrier. He arrives with bad intentions and makes a physical tackle for no gain.

The next clip taken from the Minnesota game is a 3rd and 1 from early in the 4th Quarter. The Gophers ran inside zone in order to try and pick up the first down. Britt absolutely stonewalls the RB in the hole not giving an inch bringing up 4th down. Britt is an old school downhill linebacker that meets ball carriers in the hole. This is one of my favorite plays from Britt and is a good snapshot of the type of player he is. He has his struggles in the passing game but he is a fun throwback.

The next few clips are taken from practices at the Senior Bowl. Britt was named the Linebacker of the week as voted for by his teammates in the Offensive Line and Running Back positional groups.

The first clip from Senior Bowl week is from a team period in practice. The offense aligned with a TE and Wing to one side and ran a play action concept where the TE ran an over behind the linebackers. Britt comes down hill for the fake and is unable to redirect and make a play on the ball. This is very similar to the play in the Georgia game and has been a theme for Britt.

On this next clip from the Senior Bowl team period, the offense again ran a play action pass play. This time they boot back towards Britt who is aligned as the outside linebacker of a four down defense. Britt is responsible for covering the receiver on a crossing pattern at 10 yards to the sideline. Britt is slow to read this play and subsequently unable to stay with the receiver as he crosses the field. Britt gives up an easy completion on the sideline.

The final clip is taken from the Senior Bowl itself. Britt had a steady performance.

The National team offense was running an RPO in the red zone. Britt doesn’t immediately commit to the run and stays in the throwing lane. He is able to get his hands up and deflects the pass, which is nearly intercepted. This shows a good understanding of the offensive scheme as he reads the play and doesn’t just trigger downhill to play the run. Britt appeared to be comfortable making defensive calls for Auburn.

Britt is an old school NFL inside linebacker. He is slightly undersized but he is a physical, downhill Linebacker that will make a lot of plays in the run game. I think he projects best as 3-4 inside linebacker but can also play in the middle of a 4-3 scheme. The less space Britt has to play in, the better a player he is. He has his issues in coverage, and he will have difficulties covering Running Backs and Tight Ends at the next level.

One of the traits I’ve noticed from both his play in games and in practice at the Senior Bowl was the depth of his alignment. He is at least five yards from the line of scrimmage whilst most of the other inside backers align at four yards. This allows Britt to have more time to read his keys and fit the run correctly. One disadvantage however would be the ineffectiveness of blitzing from this depth.

I would expect Britt to be a really solid special teams player. He will get downhill on punt and kickoff. He enjoys the physicality of the game and is an excellent tackler. He plays with an attitude. He could certainly contribute in this phase in his rookie year.

The Steelers brass took a look at Britt during Auburn’s pro day. Britt could certainly play a similar role to the recently released Vince Williams. Williams is a much better pass rusher, but that’s a skill that he developed throughout his time in Pittsburgh. Like Williams, Britt is a tough linebacker that plays with a chip on his shoulder. He is the type of player that Steeler fans love. Speaking of the Williams comparison, their pro day numbers are eerily similar.

Here’s a look at Vince Williams’ Pro Day numbers from 2013, those in bold are the same as Britt’s listed above:

My prediction is late day 2 selection. I don’t think he is a 3 down linebacker but he will certainly add value. He may well have been a second round selection had he not missed the majority of his Senior season due to injury.