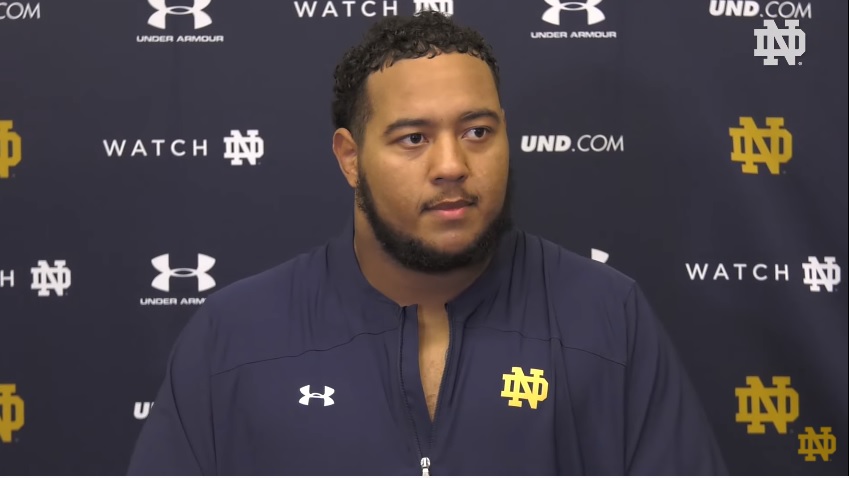 -Has good speed and explosiveness for the position when considering the size he plays at
-Quick out of his stance both in pass protection and as a run blocker
-Good mover that can combo off to backer with the center to the 2nd level
-Able to get out in space on screens and draws as a lead blocker, having the movement skills the lead up the field and pick up smaller defenders
-Has a good strong punch as a blocker, able to neutralize penetration and rush
-Has a strong, study base that makes him difficult to move him off of his spot by power rushers
-Footwork isn’t twitchy, yet are active in mirroring the rusher in pass protection
-Gets a good initial push up front, hardly ever getting pushed backwards
-Can work half a man, turning a defender’s shoulders and washing them out of the play
-Does very well when down blocking on the interior defensive line or the backer, clearing the way for good running lanes

-Hands can get caught outside the defender’s shoulders, leading to the tendency to for holds and inaccurate punch on occasion
-Will shoot his hands too quickly at times on his quickset, leading to him to whiff and lose balance
-Can struggle with quick rushers inside and getting hands-on vs defenders with leverage
-Isn’t the best mover laterally from side-to-side and will miss some assignments and potential blocks in the open field due to limited quickness
-Can be slow picking up stunts and adjusting on exotic blitzes
-Isn’t a guy that is dominate as a run blocker, imposing his will driving defensive linemen back consistently

-Senior prospect from Alameda, CA
-Highly-touted guard and tackle prospect coming out of high school
-Early enrollee that didn’t see the field his freshman season
-Played in all 13 games while starting the last six contests of the year at OG as a sophomore
-Started all 13 games on the season as a junior, allowing two sacks on 844 total snaps
-Started 12 games played as a senior in 2020
-2020 AP First Team All-American and All-ACC selection

Aaron Banks was one of the key members of a great offensive line unit for the Irish in 2020. He has impressive size for the position yet is a pretty good mover given the weight he carries. He isn’t slow out of his stance, having active hands and feet in the pass and run game. Here he fires his hands inside on the defender’s torso, gets a good leg drive and gets the defender up tall, causing him to lose leverage and to be pushed back into his teammates, eventually resulting in him on the turf.

He can get to the 2nd level of the defense and can get out in space, opening up and paving the way downfield picking up blocks. Here Banks gets out in front on the screen pass to the back, running 20+ yards downfield and eventually picking up the defensive back. He may not be the most agile mover, but for a man nearly weighing 340lb, his movement skills are impressive.

Another example where Banks moves to the 2nd level on the designed QB draw, squaring up #8 Christian Harris in open space and picks him up for Ian Book to pick up more yardage.

He is extremely effective down blocking and washing players down, creating a natural seal for the running back to run through. Here against Clemson, Banks gets a chip from the tackle on the down defensive lineman and gets his inside the defender’s shoulders and washes him out of the play on the short yardage situation, putting him on the ground and clearing the way for the back.

Here against USC, Banks shows the wherewithal to pick up the blitzing linebacker coming up the middle after helping on the down lineman. His film shows this multiple times of him being able to adjust to blitz pickups and switches with the tackle or center.

Despite his size, Banks could stand to show more strength and power in the run game. He gets a solid initial push upfront, yet it stalls out after that, rarely ever resulting in defenders getting cleared out when blocking straight forward. Here he gets hands-on with the defender, but fails to run his feet after getting engaged, resulting in Banks getting extended and giving up leverage, causing a stalemate at the line and no push forward for his back.

Banks’ hands can fail him sometimes with an inaccurate punch resulting in his hands latching on outside the defender’s shoulders which can lead to penalties. He can get too eager at times, shooting his hands too quickly resulting in misses as well. Here against Alabama, he is quick out of his stance, but shoots his hands too quickly against #94 D.J. Dale, resulting in him whiffing and for Dale to get inside his chest. He anchors down after giving a little ground, but you see Banks gets his hands outside on Dale’s shoulders. Should Dale move laterally left or right, Banks would probably get called for his hand placement.

Another example where banks shoots his hands and leans too far forward on his pass set and stops moving his feet, resulting in the defender sliding off his block and punishing Ian Book as he lets go of the football.

Overall, Banks is a starting quality guard for a power run scheme with the size and athleticism to be reliable in pass protection and make blocks inside and outside in the run game. In terms of Pittsburgh, Banks is likely a guard-only prospect and would have to rely on Dotson or DeCastro moving to center for a chance to see immediate playing time. While this is unlikely, the Steelers may target an interior blocker on Day 3 of the draft should they address OT with one of their 1st three selections and should the top center prospects be off the board, Banks could come in and provide depth behind the two starters with nothing set behind them as of now. He needs to improve his hand placement and consistency, but should he get this and his pass rush recognition down, Banks should have a job on the interior for a while in the league.