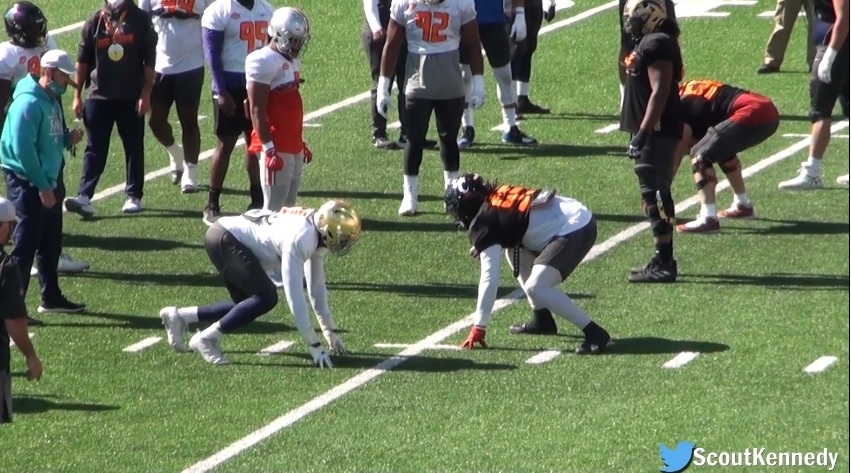 – Well-built frame, strong and big lower half
– Explosive athlete, moves well in space and shows burst out of his stance
– Shows knee bend and ability to sit in set
– Athletic enough to seal edge against speed rushers
– Capable of creating movement in run game, finisher who plays with an edge
– Competent reach blocker who sets hips well in run game, versatile enough to play in man/gap and zone scheme
– Excellent out in space when asked to pull or cover ground on screen plays
– Strong hands and excellent grip strength in pass pro
– Hasn’t played a ton of football, still learning and growing

– Average size and length (33 inches) but looks bigger than listed
– Inconsistent player in both phases, run and pass game, has lots of trait but game needs refinement
– Two-handed puncher in pass pro, loses balance and doubles over when pass rushers are able to knock both down with chops
– Plays with a little too much forward lean in pass pro, extends self too far on punch, needs to show a little more patience, especially given average length
– Vulnerable to giving up the inside in run game and inside counters in pass pro
– Can lose point of attack and struggled most vs one-gapping defensive linemen
– Penalized too often, gets grabby and overaggressive
– Not much starting/playing experience, effectively just one-year of substantial playing time

– One-year starter for Bearcats
– Began college career at Michigan, redshirted in 2017, appeared in three games in 2018
– Transferred to Cincinnati for 2019 but sat out most of season after NCAA denied hardship waiver (was able to still practice with team)
– Ejected from final game of Cincinnati career for late hit in 2021 Peach Bowl
– Briefly began college career as a defensive linemen before switching to offensive tackle
– Four-star recruit out of HS, had 21 offers, chose Michigan over Alabama, Iowa, and Miami (FL) among others
– 49 TFL, 16.5 sacks over his final two years in HS

If this offensive tackle class wasn’t so strong or if James Hudson had just one more year of starting experience, we might be talking about a first round or early Day Two pick. Hudson is a bit of a raw prospect but that’s understandable given his lack of playing time, just a one-year starter for the Bearcats after a turbulent college career that had him sitting out more than he was playing.

But Hudson has all the traits to be a successful offensive tackle in the league. On paper, his 6’4, 303 listing with 33 inch arms looks…average to a little below. But he carries his weight well, looks bigger than his listing, with a thick lower half.

Hudson is a great athlete. He shows excellent snap out of his stance and ability to pull or work to the second level in space or in the open field on screen plays. For as much as I thought Alejandro Villanueva was too harshly criticized, he lumbered in space on RPOs and screens. Hudson is a different dude. Great athlete for the position. He’s the left tackle in all these clips, #55.

Hudson has some strength and nasty as a run blocker too. Definitely able to throw his body around and finish plays with an edge. The second clip is probably more of a tackle than a block but that’s the Mike Tomlin “rather say ‘whoa, than ‘sic ’em.'”

In pass pro, he shows a powerful punch and great grip strength. He’s also able to seal and steer pass rushers upfield. Rarely did he feel overpowered or not athletic enough to slide and mirror laterally.

The biggest issues for him are in pass pro. He uses a two-handed punch that is powerful when it lands. But pass rushers with active hands can knock Hudson’s down, which causes him to lose his base and double-over. Check out one example.

He has to learn to become more patient with his punch and hands. Because he doesn’t have great length, when he shoots early, he can miss and lean, which makes him vulnerable to giving up the edge. Check out this rep in the Senior Bowl. Know it’s 1v1 and it’s a drill designed for the defense to have the advantage but this illustrates the point well. To be fair, this is him at right tackle, where he didn’t play in 2020, but I’ve seen the issue on the left side, too. 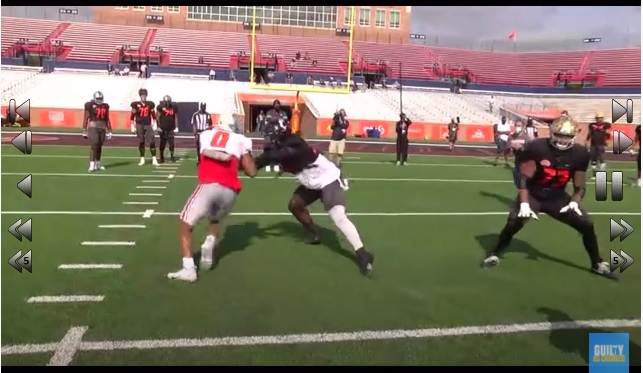 And on another rep, he loses the inside almost immediately.

In the run game, Hudson struggles most against aggressive, gap-shooting defensive linemen. I do want to see more consistency with him firing out of his stance. He’s a good enough athlete to find that baseline level every rep.

Hudson’s game overall is a little unrefined right now. He needs to play cleaner and improve his technique. In the Peach Bowl against Georgia, he was penalized three times on one drive, the final one getting him ejected from the game for targeting. He’s not Day One ready like some of the other linemen in this class. But I’m not as worried about that – he’s not a four-year starter who still has technique issues to clean up. He was a one-year starter with a lot of tools. All he needs is a good o-line coach and some time to sit on the bench and learn the game.

This is a big swing of an NFL comparison and I’ll admit I couldn’t find an ideal one for Hudson but I’m landing on New Orleans Saints’ stud left tackle Terron Armstead. Hudson isn’t the small schooler Armstead was but as a one-year starter, he has that same level of rawness and projection. And Armstead sat for most of his rookie season and got the nod for his sophomore season, which would be an ideal path for Hudson. But big fan of this guy. Get the sense Pittsburgh won’t take an OT immediately in the draft. If he’s there in Round 3/4, he’d be a great project for Adrian Klemm.

Games Watched: at UCF, vs Tulsa, vs Georgia, Senior Bowl