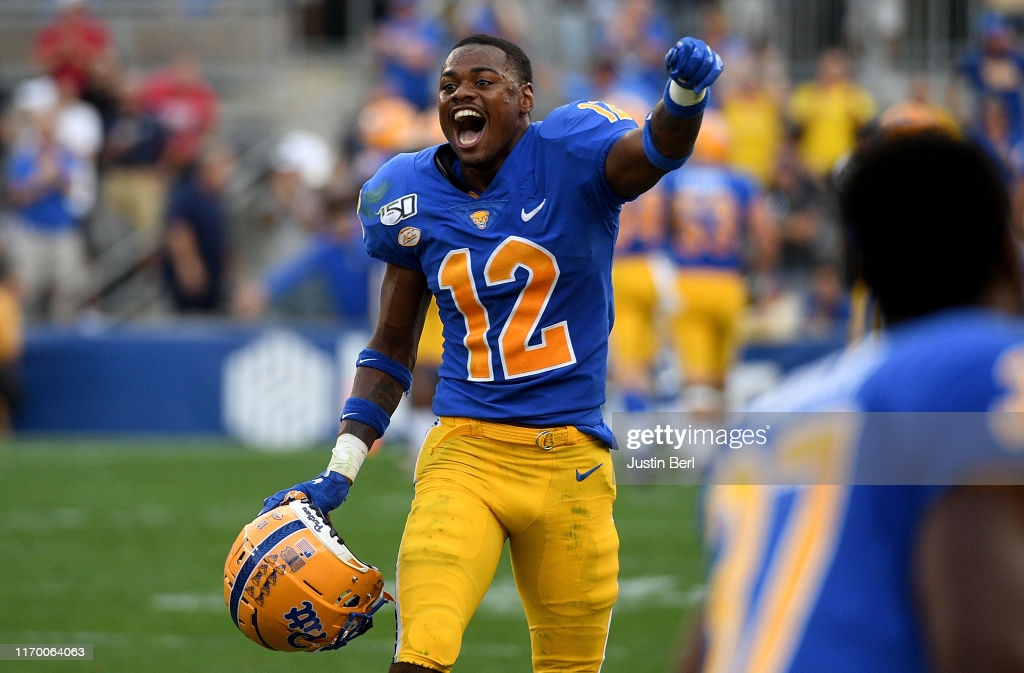 If you’ve watched a University of Pittsburgh football game the last 2 seasons, it’s likely number 12 jumped off the screen when the Panthers were on defense. While safety, Paris Ford, won’t make you get up out of your chair with his size or speed, he may have you “oohing and aahing” at his physical plays. It’s almost unbelievable the amount of hit power Ford brings with his roughly 190 pound frame. As an announcer exclaimed during one of the games “Ford hits like a Chevy.”

Against Virginia Tech in 2019, Ford was all over the field. This play you can see him follow the motion man the whole way across the formation. Once Ford sees the receiver take the jet sweep, he beelines to him, lays a nasty hit, and forces the ball out in the process.

Ford boasts as one of best run-stopping safeties in this class. He’s great at recognizing plays pre-snap and filling gaps accordingly. On this play, he’s the safety lined up closer to the bottom of the screen. You can see he recognizes the run and bounce from the running back. Then, he beats the linemen to the spot and makes a solid stick on the much bigger ball carrier.

On this play, Ford is again the safety near the bottom of the screen. You can see him patiently wait for the snap, but it already looks like he knows what play is coming, he just doesn’t want to cue the offense that he does. As soon as the ball is snapped he screams towards the handoff. Then sifts through the trash to make the solid hit.

When I say Ford is all over the field, it’s not a lie. Watch him on this play. He sinks to make sure the sit route in the middle of the field is covered, then flies forward to pressure the quarterback. Then, he continues to get a QB hit after forcing the throwing away. Great rep.

There’s gonna be a ton of talk of his awful pro-day and running a 4.90 40 yard dash, I’m just not seeing it much on tape. He has one of the quickest closes in any of the guys I’ve watched in this year’s class and his elite play recognition doesn’t hurt either.

He has instincts that you love to see in a safety. Here, at the goal line against Notre Dame, he has the flat responsibility. But once the play develops, he recognizes that the tight end is open in the corner and floats back, just missing an interception.

There’s not a ton of tape of Ford’s man coverage, but either way I don’t see that being his go-to at the next level. That being said, it doesn’t mean he can’t do it. Here against UCF, he has nice coverage on the inside post route. The throw is late and he’s able to fight through the receivers hands to ensure the incompletion.

Ford’s hit power also comes in handy in the pass game. Here, he times up the hit perfectly to create the incompletion.

He’s also a player that always seems to be in the right place at the right time, reeling in multiple tipped interceptions in his career. Here, he exhibits his closing speed on an out and is able to adjust to the pass being tipped at the line, almost making it six the other way.

With any aggressive safety, that aggression is a double-edged sword. In my opinion, with Ford, the good outweighs the bad, but there still is some bad. Here against Notre Dame, you can see him try to jump the out route and doesn’t really even get close. This results in an easy 20-yard gain. This will be something that comes with experience and Ford realizing his own limitations.

Another one against Notre Dame, Ford is reading the eyes of the quarterback, and drives on the ball. His angle is slightly off and the receiver undercuts him on his way to the end zone. This is a play that Ford has to be 100% sure he’s making if he’s going to go for the pick. There’s gonna be times in the NFL that Ford will have to wave the white flag and make the “sure” play. That will come with experience.

Our last clip we’ll be singing the same tune. Virginia Tech has a throwback pass and it beats the entire Pitt defense. Ford tracks it down but goes for the punch out instead of securing the tackle first. The receiver’s able to stay up and to turn a 30-yard play into a 70-yard play. Again, this is simply risk-management that Ford will have to learn with time.

Overall, I love Ford’s game. He’s a tone-setter and you can tell he plays with heart. If you’re just looking at tape I think he’s a day 2 player. However, the measurables and pro day times made me go back and look at his tape a second time. They’re concerning to say the least. I’m not sure how many 4.9 linebackers have had successful careers in the modern NFL much less a defensive back. If a team can look past that I think he can develop into a stud safety, but at this point I wouldn’t even be shocked if he falls deep into the pile on day 3.